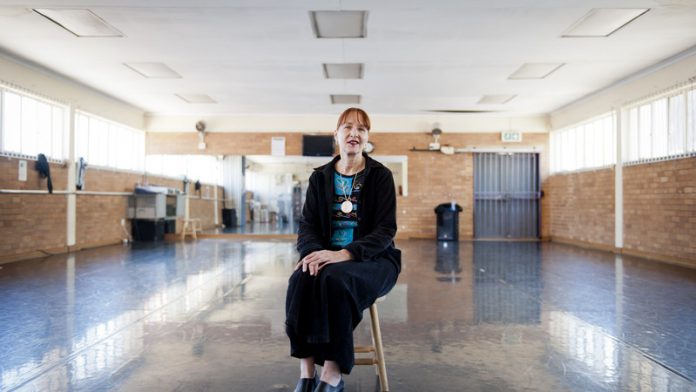 Dance Umbrella is celebrating 26 years as South Africa’s largest and longest-running platform for contemporary dance, choreographic performance and development in the country. But this year’s showcase came close to being a sombre one, as a lack of funding brought the dance festival to the brink of closure. Thankfully, the National Lottery recently came on board as the new main sponsor for a one-year term.

So whereas Dance Umbrella 2015 is guaranteed, the future of the festival is still uncertain. But according to Dance Umbrella artistic director Georgina Thomson, this lifeline goes a long way.

“We will be going back to our usual time slot. Dance Umbrella 2015 will happen between February and March next year. The National Lottery takes a whole year to assess your progress, so you sit up waiting and holding your breath. That’s the only hiccup.

“But once you get the funding, it’s glorious, because they provide full support. You get total freedom to go for the projects you want,” Thompson says.

Earlier in the year, with no funding in sight, Dance Umbrella started a Facebook conversation with stakeholders who would have been directly affected by the possible demise of the festival. A strong sentiment that came from that conversation was the suggestion for Dance Umbrella to restructure and reposition itself, with the idea of a new start. A crowdfunding campaign was also mooted to raise funds.

“We tried crowdfunding and we got R1 000,” Thomson says. “Since we lost the FNB sponsorship, I have noted that contemporary dance is not a well-understood art form. To begin a conversation with a potential funder gets tricky. From what I’ve experienced, there is a fear of contemporary dance from South Africa. Nobody can say why they’re not offering sponsorship. There’s no sense of faithfulness, which is a bad South African attitude. And yet we have a high reputation internationally.”

Dance Umbrella’s plight echoes the general outcry that the arts is under-supported. Durban’s contemporary dance festival, Jomba, which receives structural support from the University of KwaZulu-Natal and the Centre for Creative Arts, is also at a crisis point with a lack of external funding.

Fifteen years ago, Dance Umbrella was the only contemporary dance festival in the country before the emergence of Jomba in 1998 and Cape Town’s Baxter Dance Festival in 2004. However, Dance Umbrella remains the biggest nationally and the only such event in Gauteng.

In 1989 two dance-passionate journalists, Marilyn Jenkins and Adrienne Sichel, co-founded the concept of a free democratic choreographic platform with Philip Stein, who was the director of Vita Promotions (the biggest arts-business partnership of the time, responsible for the Vita Awards), and the Vita Dance Umbrella was born.

“We wanted to connect dancers, choreographers and companies across racial, cultural and artistic divides. That was the philosophy. There was an environment, but it was separate. We wanted to create a space where South Africans could see themselves and that’s still true today,” says Sichel.

It became the FNB Vita Dance Umbrella in 1993 and lost the Vita moniker in 2003. Thomson took over the management and administration of Dance Umbrella in 1997. She helped take it from being a Gauteng-based festival to one with a high national and international status. She restructured it to include commissioned work of local and international productions and helped launch the Stepping Stones programme, a platform for semi-professional and upcoming artists, developing young choreographers and dancers.

She was also behind the young choreographers’ residency programme. One of the festival’s biggest achievements has been the establishment of the Dance Space in Newtown,  a dance development venue opened in 2009.

“Dance Umbrella evolved with what the choreographers wanted. It has grown from being a space where only choreographers came to watch their work to a platform where the dance community, local and international, comes to see what is happening in dance nationally and in parts of the continent. I’ve been able to travel into Africa to network and bring works from Burkina Faso, Réunion Island and Madagascar,” Thomson says.

The festival garners an audience of about 8?000. It has launched the careers of contemporary dance stars like Robyn Orlin, Sello Pesa, PJ Sabbagha, Boyzie Cekwana, Nelisiwe Xaba, Mamela Nyamza and Gregory Maqoma — who, respected for his poignant collaborations with artists of his generation, has carved out a rich repertoire of works exploring his personal history and cultural and artistic identity.

“Dance Umbrella represents a lot of firsts for me. It’s where I was first seen professionally, where I presented my first choreographic work. It gave me my first award,” says Maqoma.

“It provides a space to test our choreographic skills and to showcase what we do. Collaborating with artists from all over the world is how we get to sustain our work. Government and the private sector need to take cognisance of the value and heritage of Dance Umbrella. But if we as dancers don’t stand together, we will lose this platform.”

Sabbagha has become known for his issue-driven dance theatre, dealing especially with HIV/Aids. “Dance Umbrella is a critical platform for emerging artists who experiment with new ideas,” he says. “It allows us to see what the international trends are. It has created for me an opportunity to explore personal and creative ideas. It would not exist if it were not for the artists. But artists struggle to find money to dedicate to a production.

“Artists are as dependent on the funding as Dance Umbrella is. It’s imperative for funders to know this. It’s important to nurture a relationship between artists and Dance Umbrella where they are mutually supported,” he says.

Thomson believes collaboration within dance is also key, noting the immense pressure that ballet dance companies are under to close down.

“It’s important to collaborate with more dance organisations rather than working in isolation. But young artists must come up now and restructure. I’m looking to hand over the reins to someone new in the next few years. And planning ahead, whoever takes over will have to consider fundraising as part of the portfolio.”

Dance Umbrella is on from August 31 to September 7, with shows at the Wits Theatre, the Market Theatre and the Joburg Theatre. Visit arts-alive.co.za for more details.

Dance Umbrella 2015: What not to miss