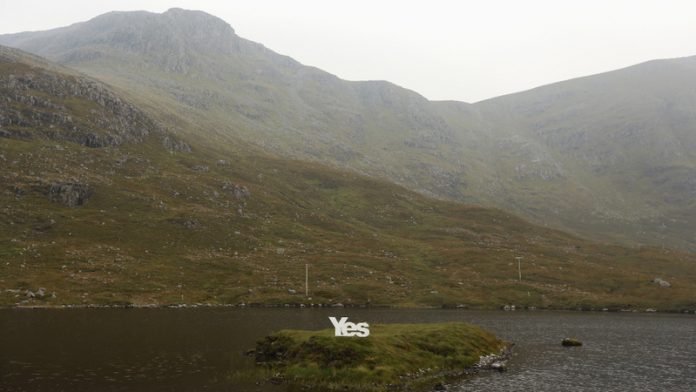 The fate of the United Kingdom remained unclear five days before a historic referendum on Scottish independence as three new polls on Saturday showed a slight lead for supporters of the union, but one saying the separatist campaign was pulling ahead.

On the final weekend of campaigning, tens of thousands of supporters of both sides took to the streets of the capital Edinburgh and Scotland’s largest city, Glasgow. Rival leaders worked across the country to convince undecided voters.

At stake is not just the future of Scotland, but that of the United Kingdom, forged by the union with England 307 years ago.

The battle also took a bitter turn on Saturday when a senior nationalist warned businesses such as oil major BP that they could face punishment for voicing concern over the impact of a secession.

The economic future of Scotland has become one the most fiercely discussed issues in the final weeks of impassioned debate.

“This referendum is about power, and when we get a ‘Yes’ majority we will use that power for a day of reckoning with BP and the banks,” Sillars, a nationalist rival of Salmond’s, was quoted by Scottish media as saying.

“BP, in an independent Scotland, will need to learn the meaning of nationalisation, in part or in whole, as it has in other countries who have not been as soft as we have been forced to be,” Sillars said.

Banks such as Standard Life would face tougher employment laws after a vote for independence, he added.

When asked about the comments in a BBC interview, Sillars confirmed he had raised the prospect of nationalisation, but said he had used the term to get media coverage. Nationalisation was not on the table, he said.

A BP spokesperson declined to comment but BP chief Bob Dudley has said that independence could cause “uncertainties”, and he did not want to see oil-rich Scotland drift away.

Major banks, oil companies and supermarkets have said that a vote for secession would create concern. North Sea oil would have to be divided up while there is uncertainty over the future currency and central bank of an independent Scotland.

“Mr Cameron and his Tory friends in Downing Street and the Labour front men in Scotland are going to get their comeuppance next Thursday because Scotland is going to vote yes in very substantial proportions,” Salmond said.

“It’s unfortunate that a number of businesses have allowed themselves to be recruited by David Cameron and Downing Street, but let me say, after a ‘Yes’ vote, and we are going to get one, it is incumbent on us to reach out everyone and build that atmosphere of ‘Team Scotland’.”

From the windswept islands of the Atlantic to the inner city estates of Glasgow, Scots are debating whether to vote “Yes” or “No” to the ballot paper question they will be asked on Thursday: “Should Scotland be an independent country?”

Independence supporters say it is time for Scotland to rule itself, free of politicians in London. “No” campaigners say that Scotland is more secure and prosperous as part of the United Kingdom, and the end of the union would destroy three centuries of bonds and shared history, as well as be an economic disaster.

Until September, all polls but one in 2013 had shown the unionists with a comfortable lead. Several surveys this month, however, show the nationalists have won over hundreds of thousands of Scotland’s four million voters.

Out of four opinion polls released on Sunday, three showed the unionists with a lead of between two and eight percentage points while an ICM poll conducted over the internet showed supporters of independence in the lead with 54% and unionists on 46%.

The ICM poll is the second this year to show independence supporters in the lead though a small sample size of 705 people means its margin of error is higher than most other polls. Polling expert John Curtice said the survey came with “a substantial health warning”.

In other developments, media tycoon Rupert Murdoch visited Scotland on Saturday and praised the country for being alive with debate ahead of the vote.

About 12 000 Protestant unionists, including contingents from Northern Ireland, marched through Edinburgh’s Old Town on Saturday in an emotional show of support for keeping Scotland in the United Kingdom.

With fife and drum bands, bowler hats and orange sashes, the marchers said the referendum on Scottish independence, which takes place this Thursday, threatened their culture and history.

“It’s your own history being taken away from you. What will you tell your grandchildren?” said Jim Prentice, a gardener, wearing a Rangers soccer club shirt, who had travelled from south of Glasgow to watch the march.

Organised by the Orange Order of Scotland, the march demonstrated that the anti-independence campaign could count on a solid, substantial, bloc of votes in Glasgow, the main battleground of the campaign.

But it also injected a sectarian element with a bitter and sometimes violent history into the campaign. The Order is linked to the Northern Ireland Protestant “loyalist” organisations and many lodges had crossed over the Irish Sea for the event.

Rivalry between Catholics and Protestants – famously manifested by supporters of Glasgow’s Celtic and Rangers soccer clubs – has often been a blight on Scottish society.

The pro-independence campaign was also pulling out all the stops across the country.

Deutsche Bank said a vote for independence would be a mistake akin to Winston Churchill’s decision to return the pound to the Gold Standard or the failure of the Federal Reserve to provide sufficient liquidity to the US banks, decisions that helped bring on the Great Depression.

“Foreign investors come to Scotland because they rely on a predictable investment environment. All of this comes from a united Great Britain,” David Folkerts-Landau, Deutsche’s chief economist, said in a note to clients.

Such is the gravity of the situation that finance minister George Osborne cancelled a trip to the G20 meeting in Australia to be held the weekend after the vote. Bank of England Governor Mark Carney will leave the G20 meeting early.

Prime Minister David Cameron will warn Scots on Monday that if they break the United Kingdom by voting for independence on Thursday then the union will never be put together again.

“There will be no going back,” Cameron will say, the Sunday Telegraph reported without citing a source. “We will go our separate ways forever.”

“To rip up the alliance between our countries would not be sensible, politically, economically or even emotionally,” Blair, who was born in Scotland, said at a security conference in the Ukrainian capital of Kiev.

Investors pulled $27-billion out of British financial assets last month – the biggest capital outflow since the Lehman Brothers crisis in 2008 – as concern mounted over the fate of the United Kingdom, a report by London-based consultancy CrossBorder Capital showed. – Reuters