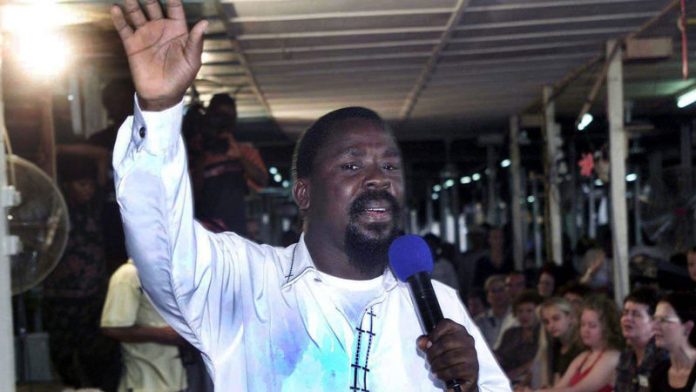 The church building collapse that killed at least 80 and injured more than 130 people in Lagos involved Nigerians, South Africans and other overseas nationals, said preacher TB Joshua in a Facebook and Twitter statement, without specifying which overseas countries.

South Africa’s President Jacob Zuma said on Tuesday that 67 of his compatriots were killed in last Friday’s collapse at Joshua’s Synagogue Church of All Nations (Scoan) complex in the Ikotun area of Lagos.

But rescue workers have said a lack of co-operation from the church authorities had hindered the search operation and efforts to establish the identity of the other victims.

Church did not obstruct investigation
Joshua had not commented directly on the deaths, and in the statement he rejected claims that his officials had obstructed the rescue effort and investigation.

The church, its members and partners had been working closely with the authorities in Nigeria, South Africa and “other nations” to help the rescue effort and care for the injured, he said.

He described those who died as “martyrs of the Kingdom of God”.

“The pain of one is the pain of all. It is indeed a sad and painful moment for the families and friends of those who have lost loved ones,” he said.

“To all those who lost family members and loved ones, please accept our heartfelt commiserations.”

He added: “It is very sad that inaccurate reports are coming from some quarters that we are not co-operating with the rescue teams and other agencies in collating information and providing assistance on the incident.

“Contrary to this, we want to categorically state that the church has provided assistance when and where required and continues to do so: good Christians are good citizens.”

Earlier Ibrahim Farinloye, of the National Emergency Management Agency said: “The death toll is now 80. We recovered 10 more bodies yesterday evening while the number of those rescued stands at 131.”

The identities of the victims were yet to be ascertained because the church, whose officials denied rescue workers access in the first three days, was not co-operating, he added.

“The church has refused to furnish us with the identities and nationalities of those in the building when it caved in,” he said.

Checks on buildings ordered
Engineers have suggested that the addition of extra floors on top of the existing building for foreign followers of the Pentecostal church overloaded the structure, causing the collapse.

On Wednesday, the Lagos State government ordered urgent structural checks of all buildings on the Scoan site.

But Joshua, who counts presidents among his followers, again suggested that a low-flying aircraft that was apparently seen circling over the guesthouse before the collapse may have been to blame.

“The church views this tragedy as part of an attack on The Synagogue Church Of All Nations and in particular Prophet TB Joshua,” he said.

“In due course, God will reveal the perpetrators of this unfortunate tragedy.”

“There are 265 South African survivors. Initially there were 96 injured South Africans, but now there are only 29 still in hospital, including a three-year-old child,” Lulu Mnguni said in a telephone interview. The rest of the injured had been discharged. Most of them were women. Seventeen South Africans were still unaccounted for, he said. – AFP, Sapa