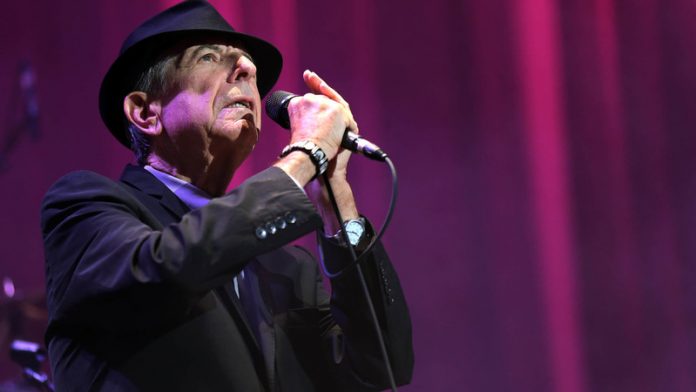 Singer-songwriter Leonard Cohen, who turns 80 on Sunday and is releasing his 13th studio album two days later, is not generally known for being funny. But he is – and seriously so.

For a certain older generation, he is associated with dark, depressing songs of the hide-the-Minora-blades variety. “I get put into the computer tagged with melancholy and despair,” Cohen was quoted as saying 10 years ago in the Guardian. “And every time a journalist taps in my name, that description comes up on the screen.”

For later generations he is synonymous with his song Hallelujah, which appeared on his 1984 album Various Positions, and which gets molested on so many television talent shows.

Normally not an easy audience, journalists from 25 countries were eating out of those Cohen hands at an “intimate” private preview listening session of Popular Problems at the Canadian High Commission in London. The Montreal-born Cohen had us roaring with laughter in a Q&A session, after a quiet, reverent 36 minutes during which the album was played to us. His nickname, “Laughing Len”, certainly lost its ironic status.

Seated under the painting of a desolate landscape by another of Canada’s artistic greats, Jean Paul Lemieux, Cohen lived up to the expectations of anyone who has read the excellent 2012 biography by Sylvie Simmons, I’m Your Man: The Life of Leonard Cohen, which has this great line in its prologue: “Darling,” says Leonard, “I was born in a suit.”

Cohen is dressed in an elegant dark suit, a grey shirt and a striped maroon and grey tie, with a black Fedora hat on his knee, looking somewhere between a college professor and a London dandy. He is still handsome with his slicked-back grey hair and a clipped grey goatee. Just a bit of gravity’s drag on the earlobes and past the corners of the mouth, towards the bottom of the cheeks.

In fact, Cohen looks much like he did back in the early 1960s, before he became a poet. “A lady journalist in Winnipeg once described him as having the stoop of an aged crop picker and the face of a curious little boy,” said the slightly antiquated narrative of a brilliant Canadian documentary, Ladies and Gentlemen … Mr Leonard Cohen.

Popular Problems is by no means his final will. Cohen (lyrics) and collaborator Patrick Leonard (music) are already working on their third album together. “It will be called Unpopular Solutions …” he deadpans.

Popular Problems deals with serious problems too – and with the helplessness that comes with them. “I saw some people starving/ there was murder, there was rape/ Their villages were burning/ They were trying to escape/ I couldn’t meet their glances/ I was staring at my shoes…” goes the song Almost Like the Blues.

“Of course it reflects the world that we live in – I think one picks up these things from the atmosphere,” Cohen says. He has worked with many producers in his lifetime as a musician. There’s the great story about the notorious Phil Spector who produced, in his elaborate Wall of Sound style, Cohen’s 1977 album Death of a Ladies’ Man, a title that almost proved prophetic.

During the chaotic drug and booze-fuelled recording sessions there were guns everywhere. “Phil was beyond control,” Cohen tells Simmons in her book. During one session, at four in the morning, as Cohen was finally getting to sing, Spector came down from the control room with a bottle of alcohol in his left hand and a gun in his right.

Spector put his arm around Cohen and pushed the muzzle into the singer’s neck. “Leonard, I love you,” Spector said, cocking the trigger. “I hope you do, Phil,” Cohen replied. Needless to say, the recording of Popular Problems was a much calmer process. Style-wise it takes in gospel, blues and country. “That’s our music,” Cohen told the listening session.

“You don’t really want to reinvent the wheel so you take the forms that are available, you try to work with those. You know Pat’s palette is very wide – he brings a tremendous newness to the old forms.” The album is a wonderful listen. Cohen’s eight-decades-old and impossibly deep voice – here gravelly, there a tender whisper – doesn’t sound tired or world-weary. It simply sounds wise.

Ironically enough, we wouldn’t have been at the Canadian embassy if it were not for his former manager, Kelly Lynch, who stole $5-million from Cohen, forcing him back on the road after five years in a Zen Buddhist monastery in California. He’s been back on the road and has recorded a number of albums, because Lynch never repaid the money. Cohen has recouped the money over and over again.

“I love life on the road – it is a lot easier than civilian life, it’s like a motorcycle gang,” he says to peals of laughter. “It’s a lot easier than this – there’s a band behind you.” Cohen is a prophet truly honoured in his own land. He remains patriotic even though he has lived outside Canada for large parts of his life.

“Canadians are very involved in their country,” he explains. “We grow up on the edge of America – and we watch America in the way that women watch men … very, very carefully!” he adds, eliciting another round of laughter.

“So when there’s this continual political and cultural challenge right on the edge of your lives, of course it makes you adopt a sense of solidarity.” A journalist asks him: “Two years ago, you said that you would start smoking again at 80?”

“Yes.” Brief pause. “Has anybody got a cigarette? There are so few places you can smoke now … I’m going to be 80 in a couple of days. I smoked for 50 years or so, gave it up 10 or 15 years ago, and I really liked smoking and I think about it a lot.” The master of drollness and the perfect pause idles for a second, and then: “I’m thinking about it right now!”

How is he going to spend his 80th on Sunday? “Our family hardly celebrate birthdays or anniversaries so everybody is kind of let off the hook – if you forget somebody’s birthday or celebrations there are no penalties. So it may go by like any other day … I may have a smoke.”