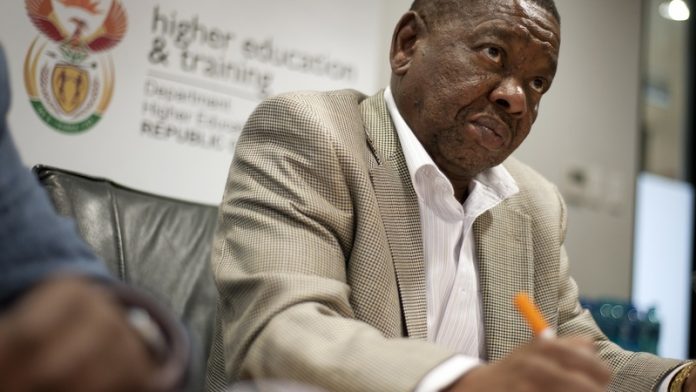 He said a report detailing findings of an independent investigation into the “Heil Puk” salute that Beeld newspaper reported in February students performed as part of their initiation ritual has confirmed this.

“My main concern was that initiation practices and apparent acts of fascism and nazism at the university were taking place under the tacit approval of the university management,” Nzimande told journalists at a media briefing on Thursday.

“The fact that the former vice-chancellor [Theuns Eloff] at the time tried to dismiss my concerns and tried to defend what was happening at the campus as innocent cultural activities … shows that I was correct to intervene,” said Nzimande.

“I am relieved to see that [the] report contradicts” Eloff’s statement, he said. “My own view is that the [former] vice-chancellor was less than friendly and honest with me.

Eloff unprepared to transform Pukke
Eloff resigned from the university in March this year when Nzimande commissioned the investigation into “Heil Puk” salute incident and initial rituals at the Potchefstroom campus.

Dan Kgwadi, who was appointed as the university’s first black vice-chancellor, took over the reins. He is being inaugurated on Friday evening.

Nzimande lashed out at Eloff as someone who wasn’t prepared to transform Pukke, as the Potchefstroom campus is known. “The previous vice-chancellor was not committed to addressing the violation of human rights at this institution.”

In it’s entirety the university was still not integrated, following its merger in 2004, said Nzimande. Its three campuses, including those in the Vaal and Mafikeng, “are like islands”. This kept Pukke as an Afrikaans campus, he said.

Pukke still an ‘apartheid institution’
“It is particularly refreshing that there is tacit acknowledgement that the NWU institutional model is problematic and appears to have been engineered to foster a largely monoculture environment that appears to be designed mainly for white Afrikaners on the Potchefstroom campus.

“The university should be fostering a culture on all its campuses that includes Afrikaans in an open and inclusive manner.” It is “undoubtedly [a] fact that the Potchefstroom campus of NWU remains fundamentally an apartheid institution, if not an enclave, in urgent need of transformation.” Nzimande accused the university of “trampling” on the country’s constitution. “What’s happening at Potchefstroom … is as good as tearing our constitution apart.”

Initiation rituals at universities are banned, yet NWU has repeatedly come under fire for allegedly allowing the practices. When first-year student Thabang Makhoang drowned at a pool in Pukke in 2012, the public outcry focused on initiation practices at the university.  “It is of concern that since 2008 there have been a number of investigations at NWU, both externally and internally, that have focused on issues of transformation and/or on first-year orientation and welcoming programmes and initiation activities,” said Nzimande.

“Little has been done to deal with these issues. Three internal institution-specific studies were carried out between 2009 and April 2014, and the current report is the fourth report within the space of five years.”

Public release of findings
“The frequency of these investigations, focusing on the same issues relevant to the Potchefstroom campus of the university, is a clear indication that there are problems that require action.”

Nzimande claimed the university’s council has tried to block a public release of the report. “It is unacceptable that a report that exposes a deep moral corruption at a major public university should be kept from the university community and the people of this country.

“This is how a council that is strongly influenced by organisations that pretend to be champions of transparency, such as AfriForum, tries to use university autonomy to frustrate transformation and democracy.”

He said it’ll “be an injustice” if it’s not released to the public, and he hopes that organisations such as Right2Know “would come to my defense”.

Turning to the apparently racist black face incidents at the universities of Stellenbosch and Pretoria, Nzimande said he expected the institutions to carry out investigations.  “We’re not going to let these things go unchallenged.

“We’ve not done away with racism in our country, and all other forms of discrimination, patriarchy…”