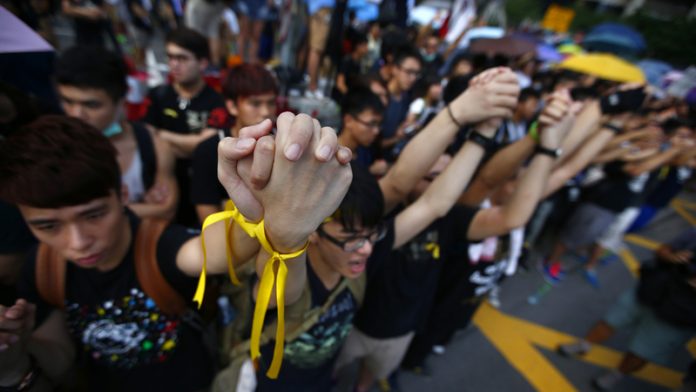 Beijing has pledged its support for Hong Kong’s embattled leader CY Leung and warned that ongoing pro-democracy protests could push the city into “chaos”, state media said on Thursday.

“The Central government will continue to firmly and unshakeably support legal measures and policies taken by administration leader CY Leung and the police of the special territory in handling these illegal protests according to the law,” a front-page editorial said.

The piece in the Communist Party mouthpiece People’s Daily also warned that “if matters are not dealt [with] according to the law, Hong Kong society will fall into chaos”.

It described the protesters – who are calling for unrestricted democracy and for Leung to resign – as “selfishly” disrupting social order in a way that “harms social stability and economic prosperity of Hong Kong”.

Since the street protests escalated on Sunday, Beijing has given its full backing to the city’s authorities and voiced opposition to what it terms “illegal acts”.

“I believe for any country, for any society, no one would allow those illegal acts that violate public order,” he said. Beijing has heavily censored all information in mainland China related to the Hong Kong protests, which have brought thousands of people onto the streets.

Activists detained
This week authorities detained more than a dozen activists across China and questioned as many as 60 others who have expressed support for Hong Kong’s pro-democracy movement, according to the advocacy groups China Human Rights Defenders and Amnesty International.

“The rounding up of activists in mainland China only underlines why so many people in Hong Kong fear the growing control Beijing has in their city’s affairs,” Amnesty’s China researcher William Nee said in a statement in response to the clampdown.

Authorities have also scrubbed mention of the protests from Chinese social media.

On Thursday Hong Kong pro-democracy protesters demanded Leung heed their ultimatum to resign. The demonstrators consider the city’s embattled leader a Beijing stooge. Demonstrators, who have shut down central areas of the southern Chinese city with a mass sit-in, have given Leung until midnight to step down, or face escalated action.

In a movement being dubbed the “umbrella revolution” – a nod to the umbrellas they have used to protect themselves against pepper spray, the sun and torrential downpours alike – the protesters have brought key parts of the city to a standstill, heavily disrupting the transport network and shutting down businesses.

The protesters are furious at the central government’s refusal to allow free elections for the city’s next leader in 2017. Beijing has said only two or three candidates vetted by a loyalist committee will be permitted to stand.

“We will consider having different operating actions in future days, including occupying other places like important government offices,” said Agnes Chow of student movement Scholarism.

China under pressure
Some analysts say it is unlikely that Leung will step down, in what would be a massive loss of face for the establishment.

“If Beijing forces him to resign, they will be seen to be buckling under pressure from the protesters. They might give out signals that he has been sidelined, but the likelihood of his immediate dismissal … is not very high,” said Willy Lam, a China scholar at the Chinese University of Hong Kong.

However Lam added that the longer the protests affect Hong Kong, the more pressure Chinese president Xi Jinping will be under to act. “If he is seen as failing to control a state of anarchy for more than two or three weeks he will be exposed to criticism (from within the Communist Party) and in that case sacking C.Y. becomes a possibility.”

Chris Patten, the last British governor of Hong Kong, told BBC radio the entire situation had been “very, very badly mishandled”, calling on authorities to enter into consultation with demonstrators.

The protests pose a huge political challenge for Beijing at a time when the Communist Party is cracking down hard on dissent on the mainland.

In a sign of Beijing’s growing unease, a local tourism leader said Chinese travel agents were reporting that group visits to the city had been suspended.

October 1-7 is known as “Golden Week” in mainland China, a key shopping holiday that usually sees many travel to Hong Kong. – AFP