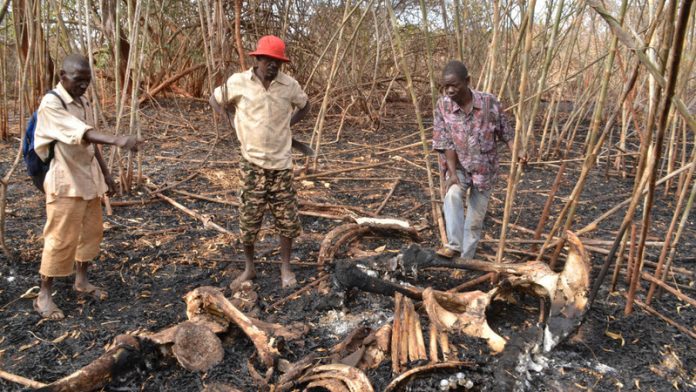 Environmentalists warned in mid-September that killing for ivory by organised syndicates was being carried out on an “industrialised” scale – between 1 500 and 1 800 elephants are being poached a year, mostly in northern Mozambique.

According to the reserve’s administrator, Cornélio Miguel, an average of five elephants are now being killed there daily. In the Quirimbas National Park, the elephant population was reduced from about 2 000 in 2008 to 517 by 2011, according to the Worldwide Fund for Nature (WWF).

Baldeu Chande, the administrator of Quirimbas, estimates the park now has a maximum of 790 elephants. Over the past weekend alone, at least three poached elephant carcasses were found in the park.

The Mozambican government has established a national task force, involving several ministries, to protect natural resources and earlier this year introduced draft legislation that provides prison sentences of between eight and 12 years, and fines of between $4 425 and $88 500, for poachers who kill protected species.

Web of complicity
My investigation, which started in November 2013, revealed a web of official complicity in the slaughter among administrative, judicial and tax authorities in the northern provinces of Cabo Delgado and Niassa.

The poaching networks on the ground consist of armed hunters: Mozambicans, Tanzanians and Somalis with high-calibre weapons. They smuggle their illegal proceeds through Mozambican ports, airports and borders, destined mainly for China or Vietnam.

Until March this year, under conservation of forest and wildlife legislation, they only received small fines when caught. In April a Bill was approved that sets prison terms of two to eight years for offenders.

But documents show that, despite the laws, officials are facilitating these crimes. Some sell weapons and ammunition, military uniforms and boots, and others expedite the release of detainees and make evidence disappear.

Judicial system
The investigation discovered 15 cases involving armed poachers in the Quirimbas National Park, from between 2009 and 2013, which were forwarded to the criminal investigation police, the prosecuting attorney and the provincial court – with no outcome. Even some poachers who had been brazenly walking around with AK-47s were released.

Four alleged poachers were arrested in Quirimbas in 2010 after killing three elephants. Charges were laid against the syndicate members Manuel Kachupa, Jorge Salimo, Luís Assima and António Amisse, but they were released.

In another operation against the same group in 2011, 106 rounds of AK-47 ammunition and 104?114 meticais (nearly R40 000) in cash were seized. This time Luís Assima, head of the group, got wind of the arrests and left the day before with another accused, Manuel Kachupa, to hunt with three automatic weapons.

Kachupa is a ringleader, but appears untouchable. In August 2011 he was captured with more than 90 000 meticais in cash and a week later he was released after paying a “deposit” of 20 000 meticais.

In another case, after he was caught leading a group of six poachers chasing elephants, he managed to escape with a rifle, ammunition and three elephant tails. He was recaptured and detained in a maximum security prison, but four days later he was released.

These are just some of the cases of possession of elephant products, large amounts of cash, unlawful firearms and ammunition that have not been followed up with legal action.

One policeman said there was no money to feed the poachers in jail. Another insider alleged that a “deposit” of 15 000 meticais was guaranteed to secure release from prison. Contacted for comment, the current prosecutor for Cabo Delgado province, Bernardo Mecumbua, referred the reporter to his spokesperson, deputy prosecutor Armando Wilson.

Wilson said that in the past two months four poaching-related cases had been brought before the courts, and more were on the way, but he was not able to give details of the cases, nor of those arrested or released.

‘Problem’ elephants
In the province of Cabo Delgado, the administrator of the district, Ancuabe Eusébia Celestino, and the chief secretary of the village of Muaja, Horace Radio, provided weapons used in the killing of so-called “problem” elephants they said were destroying farms around the Quirimbas National Park.

For four days I accompanied poachers in the district of Ancuabe, talked with community members and searched the forests for elephants. But the elephants were wary and avoided us.

Yet we saw logs of the hardwood species pau preto (Dalbergia) scattered through the forests, waiting to be collected. That week, elephant poachers and the illegal loggers were aware of our presence; some even said to us: “This is wrong, there is no business.”

In Muaja, Radio denied his involvement in poaching, despite the fact that community members were able to prove otherwise.

About 10 elephants were slaughtered in Nonhala, Namaika and near the Montepuez River. They were slaughtered by day, “against the wind, with a shot in his forehead or heart and the elephant falls on the spot”.

The killing groups consisted of three to six persons, including watchmen and “scouts”.

It is a rapid procedure: the poachers catch, kill, with an axe cut away the flesh on the forehead of the elephant, remove the tusks and deliver them to the clients, owners and/or arms suppliers. “I had a gun that the manager gave us, here with the village chief, who received the gun from the hands of the administrator himself,” said one member of the group.

“The secretary called me go to shoot elephants,” he recounted. “I managed to shoot down two elephants, a large female and her offspring. The third weapon, a Russian Mauser, we received from the hands of a tax officer named Terenciano Faire in Quirimbas National Park.

“He worked in a village named New Zambezia, where we slaughtered elephants within the Quirimbas National Park. He is now in Incole-Chaimite in Ancuabe.”

A second poacher corroborated his teammate: “The administration brought two guns, one a Russian brand. We were taken to New Zambezia because there was an elephant who assaulted a woman who ended up losing her life. We slaughtered the elephant.

“We got nothing: no ivory, no money, no meat. They told us to kill elephants with the promise of earning something, but so far we have [received] nothing.”

In Muaja, another weapon was delivered to a poacher by “a former military major” named “Emilio”.

“It was a Russian Mauser given to me and my friend, as poachers,” we were told. “We caught an elephant, slaughtered it and took the ivory. We also slaughtered elephants in the lagoon area.”

The third poacher, an ex-soldier belonging to another group of poachers in 2012, also received a “Russian Mauser coming from an administrator … I shot down an elephant in the Matuine zone. The district officer took the gun, ivory and meat and went away.”

In Quirimbas the administration has no autonomy to kill or cull elephants, either inside or outside the park. “Problem” animals must be dealt with by the provincial department of agriculture, and they must inform the park that they will send men to drive off, but not to slaughter the animal.

Of the elephants slaughtered on orders from the administrator over the past four years, neither the park administration nor the provincial directorate of agriculture of Cabo Delgado received any ivory. These facts were confirmed by both institutions.

Police chief in Pemba
The agriculture department’s forestry and wildlife division in Pemba confirmed that the following districts had made delivery of tusks of ivory: Mueda – 18, Mocimboa da Praia – 16, Muidumbe – 1. No tusks came from the Ancuabe district.

At the airport and port of the town of Pemba, security sources said the provincial police commander, Dora Manuel Manjate, abused her power to facilitate the passage of ivory, rubies and other illicit products for Chinese clients.

They said when police and customs officials questioned the commander, “we are threatened by the commander and assigned names by the Mofid forestry company [Mozambique First International Development], a friend of the commander’s”.

Illegal shipments are often hidden among timber transported in shipping containers. “When we searched and found illicit goods, Mofid connected directly to Dora Manjate and said: ‘These are your dogs here to bother us.’ Suddenly the station chief came and told us to disappear.”

According to the security sources, Chinese buyers have contributed towards a new home and vehicle for Manjate – “a 4×4, one of those newer types, a make not assigned by the police”. One of our sources in the harbour said that recently, at the behest of Manjate, a policeman who tried searching a forestry container was locked up in a cell for eight days. “We’re afraid to search a container in the port when it belongs to Mofid.” After confirmation in the geography department and from a member of the municipal council of Pemba, we tracked down Manjate’s home, located about 200m from the beach with a stunning view of the sea.

On entering the house, we found Mozambican workers and a Chinese company busy with construction. According to them, the construction will cost in the region of 1 100 000 meticais (about R400 000). – oxpeckers.org