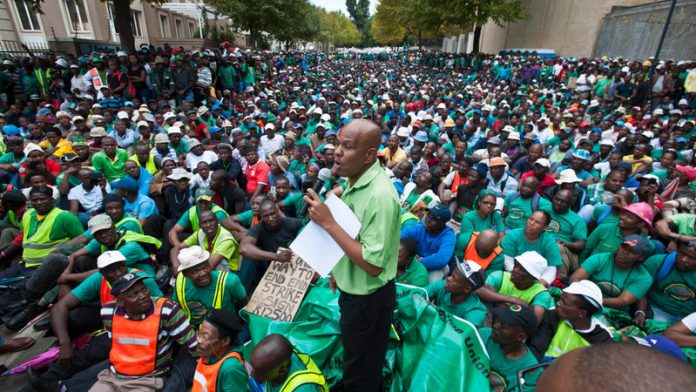 For decades, production in South Africa’s platinum mines has rested on the muscular shoulders of men risking life and limb to drill into the rock face with jackhammers.

Three years of labour upheaval and a political push to make the shafts safer and transform the low-wage workforce have set in motion a drive to replace such rock drillers with machines.

“Labour militancy is dictating our push to mechanisation and boardrooms will rubber stamp this stuff,” said Peter Major, a fund manager at Cadiz Corporate Solutions.

The costly change is happening despite the obstacles thrown by geology, low platinum prices and capital constraints.

At Anglo American Platinum’s Bathopele mine near Rustenburg, technology has already made rock drillers obsolete as hydraulic machines do the job, blazing an automated trail others are keen to follow.

Elsewhere in the platinum shafts, plans are afoot to roll out mechanisation, including at Amplats’ rival Impala Platinum , which recently sent a team to Bathopele to observe the lay-out – an unprecedented example of cooperation in an industry that has long been fiercely competitive and secretive.

Implats, Amplats and Lonmin, the world’s top three producers, are also partnering at Bathopele with mining products company Joy Global to develop rock-cutting technology, which would remove the need for blasting and rock drilling.

Joy Global’s chief executive Ted Doheny told Reuters in a phone interview from the company’s Wisconsin headquarters that implementation would take another five to ten years.

Top platinum producers unite
The big three platinum producers are united as never before, having collectively faced a five-month wage strike by the Association of Mineworkers and Construction Union (AMCU) this year, which pushed them to the brink and dealt a crushing blow to investor perceptions of South Africa’s mines.

The automation drive is underway: Amplats wants to sell off its conventional mines to focus on mechanisation while Implats’ chief executive has said “we will mechanise where we can”.

The industry says the pivot to mechanisation was in the works even before AMCU’s emergence on the platinum belt, where it has poached tens of thousands of members from the rival National Union of Mineworkers (NUM) in a turf war that has killed dozens and unleashed the recent waves of labour unrest.

Also underpinning the drive has been calls from government for the industry to move away from the labour-intensive, low-wage model rooted in the apartheid era. A government safety drive with the goal of “zero harm” has also triggered a scramble to find less lethal mining methods.

Scores still die each year in South Africa’s deep and dangerous mines, though much progress has been made since the 1980s when hundreds of miners perished annually, with much of the toll inflicted on rock drill operators.

“The shafts we are designing today will be in operation for 50 years and one has to take a view on whether rock drillers will be available, and whether using people in that way will still be acceptable,” said Implats spokesperson Johan Theron.

Safety aside, the triumph of technology over geology in the platinum shafts will have other consequences and hit AMCU hard, as its members are mostly semi-skilled, at the bottom of the wage scale, and perform tasks mechanised equipment will replace.

Rock drillers also comprise the union’s hardline core and so the reduction in their numbers could deal a blow to AMCU’s position.

“AMCU understands that mechanisation can undermine its collective power,” said Crispen Chinguno, a researcher at the University of the Witwatersrand’s (Wits) sociology department, and an expert on the union.

At Bathopele, higher-paid employees, including AMCU members, broke union ranks during the big strike this year and it started limited production before the wider industry stoppage ended.

Officials from AMCU declined comment on the issue of mechanisation. Rival unions have concerns about jobs but welcome the mechanised trend if the aim is better pay and safety.

“We have a problem with the introduction of mechanisation if its sole purpose is to replace labour. But if it’s about safety and workers getting more pay, then we don’t have such a problem,” said NUM’s general secretary Frans Baleni.

Strides in mechanisation
Geology has confounded industry attempts to mechanise in the past because the platinum reef is generally too narrow, or at too steep a gradient, for machines to easily access. The gold reef also presents challenges on this front.

This is changing as firms like Atlas Copco and rival Sandvik develop machines that can work in ever tighter spaces and steeper conditions.

These include “drill rigs” and “roof bolters” that will replace the human rock drillers, whose jackhammers grind into the earth to insert explosives for blasting or safety bolts for underground roof support.

There are also mechanical sweepers with rotating steel brushes to move debris – a job still done in many South African mines by men with shovels.

In a shallow crevice at Bathopele, a hydraulic roof bolter designed by Atlas Copco drilled into the rock above, where the safety bolts will be inserted. Metres away crouched a man remotely controlling it.

With a vertical hydraulic drill protruding in front, it resembles a flattened bulldozer that can squeeze into tight spaces: in this case around 1.2m.

“We can do this far more productively and we remove the people from the hazard zones,” said Judd Barlow, head of production at Bathopele’s central shaft.

Capital constraints
On the platinum belt, Bathopele is a prototype and the swing to mechanisation will not happen overnight.

Wit’s Jim Porter, who is based at the university’s Centre for Mechanised Mining Systems, says that the capital expenditure will make no sense [for older mines] because of their life span.

This is the challenge faced by Implats, which does not have a vast pool of capital at the moment, given the depressed price for the precious metal used for emissions-capping catalytic converters in automobiles. Platinum is near five-year lows.

Implats, which had net cash at the end of its financial year in June of R4.3-billion, is also burning up money on its post-strike ramp up.

Gerhard Potgieter, head of growth projects at Implats, says the company’s first-generation shafts around Rustenburg, known as “the old men”, will not be mechanised given their age.

The best potential for mechanisation can be found on its “Big 5” shafts, large second and third-generation operations. All of Implats’ tunnelling operations are also being converted.

Back at Bathopele, the surface presents as sharp a contrast with conventional mines as its underground operations. Unlike most of the mines in the area, where workers are bussed in or trudge on foot, Bathopele’s skilled and higher-paid employees drive themselves and its parking lot is full of gleaming new cars and pick-up trucks.

“We actually have a parking problem here, we are running out of space,” said one employee. – Reuters