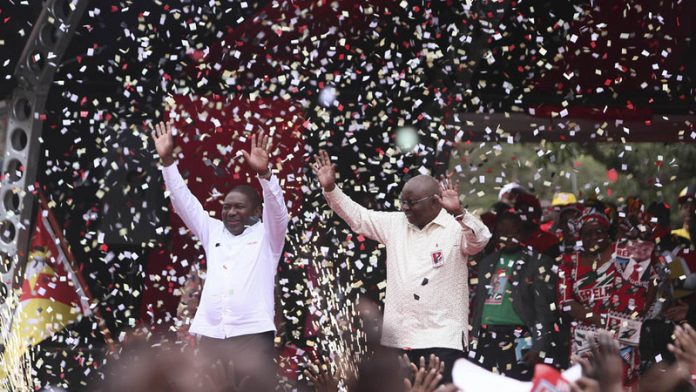 Mozambicans voted on Wednesday in elections that are expected to return the ruling Frelimo party to power in one of Africa’s fastest-growing economies, which is looking to escape years of poverty and conflict by tapping into its huge energy resources.

Polling stations opened at 7am local time (5am GMT) across the Indian Ocean nation, whose 2 500km coast stretches from Tanzania in the north down to South Africa.

More than 10-million voters were registered to take part in the elections for a new president, parliament and provincial assemblies. Foreign donors and investors hope the ballot will help to bury old animosities still lingering from a 1975 -1992 civil war fought between Frelimo and its old foe Renamo.

Ordinary Mozambicans say they want whoever wins the vote to use the country’s newly discovered resources of coal and natural gas to end poverty and inequality and to create more jobs.

“The leaders must think of the people, they must know how to invest the resources,” said engineering student Helder Mesquita (24) walking to a polling station with his wife and infant son.

Maintain power
Frelimo is a former Marxist liberation movement that has ruled Mozambique since independence in 1975 and its presidential candidate, former defence minister Filipe Nyusi, campaigned hard to maintain the party’s grip on power.

However, he is facing a tough challenge from both the Renamo leader and former rebel chief Afonso Dhlakama, as well as from a rising third force in the former Portuguese colony – Daviz Simango and his Mozambique Democratic Movement (MDM).

Nyusi and Dhlakama voted early in the capital Maputo, as did outgoing Frelimo President Armando Guebuza, who is barred by the Constitution from standing for a third term. Guebuza urged all Mozambicans to vote and to shun violence.

The Frelimo candidate Nyusi said he was confident of victory, calling the day “a celebration for Mozambicans”.

The election, the fifth presidential vote since a 1992 peace deal ended the civil war, is “the most competitive in the history of the country”, John Stremlau, vice-president of peace programmes at the Atlanta-based Carter Centre, told Reuters.

International interest
Stremlau is one of more than 1 000 international observers, including from the African Union and the European Union, who will be monitoring Wednesday’s voting.

If Frelimo’s Nyusi (55) fails to secure more than 50% of the total ballots, he will face a deciding second round run-off with his nearest contender in which the anti-Frelimo votes would be united against him.

The new president will oversee the bringing into production of large-scale offshore natural gas and oil projects in the north of Mozambique that are already being developed by investors such as United States oil major Anadarko Petroleum and Italy’s Eni.

The raging Ebola epidemic in three West African nations has cast a pall over the wider region and stoked global alarm, but Mozambique in the southeast corner of Africa, so far Ebola-free, is widely viewed as a bright prospect on the continent.

The IMF sees Mozambique’s gross domestic product growth topping 8% this year, though it remains among the world’s least developed countries and the majority of its more than 25-million people live in poverty.

“The real test of this transition moment is whether the political leaders who have historically fought each other will think in terms of a government of national unity, so that you will have inclusivity in the aftermath,” Stremlau told Reuters.

He noted all of the main political leaders had said they would accept the result.

Calls for equality, inclusion
Renamo’s Dhlakama and MDM’s Simango concentrated their campaigns on attacking what they say is the stranglehold Frelimo has long maintained over political and economic power in Mozambique. They have promised more inclusive government.

“Mozambique belongs to everyone” was the slogan of MDM’s Simango (50) a Renamo defector and civil engineer who made a credible first showing in the 2009 presidential vote and whose party made gains in local government elections last year.

Over two years leading up to the vote, Dhlakama’s armed Renamo partisans clashed sporadically with government troops and police in the bush and ambushed traffic on a key north-south highway, frightening away tourists and triggering some concerns that Mozambique could slide back into a civil war.

The white-haired, bespectacled former guerrilla leader, who is 61, only emerged from a mountain hideout last month to ratify a deal with Guebuza reaffirming a 1992 peace pact. He had accused the Frelimo government of trying to eliminate him.

Joaquim Tobias Dai, president of the Mozambican Association of Economists, said that managing popular expectations over the much-trumpeted coming hydrocarbons boom would be a challenge.

“Whoever wins the election must have the strategy in place … The next five years will determine a lot,” he added.

The SEOM would be undertaken in three phases – pre-election period, election-day, and post-election. The mission in Mozambique had around 142 personnel from SADC countries such as South Africa, Angola, Botswana, Lesotho, Malawi, Mozambique, Namibia, Tanzania, Zambia, and Zimbabwe.

“The observers are deployed in all the provinces of the Republic of Mozambique,” Monyela said. Mozambican voters were going to the polls on Wednesday.

“We remain indebted to the people of Mozambique who suffered at the hands of the apartheid regime and despite the atrocities committed against them, remained steadfast that the cause for the political liberation of South Africa as part of the family of nations on the African continent, must triumph,” spokesperson Zizi Kodwa said in a statement.

“We have no doubt that the sacrifices of our common peoples were not for nothing and thus as the people of Mozambique take to the polls today, we wish them free, fair, credible, transparent and peaceful elections …” – Reuters, Sapa

New report sheds light on the conflict in Mozambique