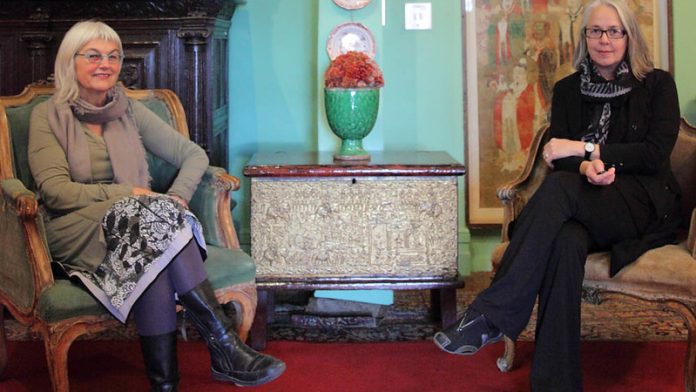 The house at number 21 Cecil Road in Rosebank, Cape Town, a museum and cornucopia of the late Irma Stern’s (now extremely valuable) art, has become an unconventional space of wonder and invention.

Legends of dinner parties hosted by her in the narrow room with its long heavy wood table live on. One can imagine the dramatics of the table talk.

As part of a topsy-turvy new exhibition titled Artworks: The Stern Exchange in the artist’s house, ceramicist Clementina van der Walt has assembled a tribute to those oddball Stern guests of yesteryear in her own maverick manner.

A flamboyant set of tableware is laid out as for an artsy banquet. Each plate and bowl has been hand-sculpted and fired in colours that bounce off the tones in the surrounding paintings. Very Irma.

Conversation between the old and new
Van der Walt’s partner in The Stern Exchange at the University of Cape Town’s Irma Stern Museum is photographer Lien Botha.

They say the idea is to stage an intervention in the museum, among its displays and with its heritage.

It makes for a delicious dialogue between artists of now and the legacy of a great one – one now so highly revered that her paintings sell for millions.

Botha, augmenting work from two of her previous portfolios, Moundou (2008) and Plant Press (2009), is showing eight new photographs of the museum’s staff. They pose playfully, even comically, interacting with the heavyweight, high-art environment of the interior.

Botha calls the essay “an idiosyncratic insertion into the raison d’être of this venerated building”.

These images are displayed in the upper rooms that act as the building’s temporary exhibition spaces. Here, stage-managed by the Ebony Design team, more of Van der Walt’s magnificent bowls, platters and vases are set on utilitarian tables that gently echo the rough “African” feel of the Stern furniture elsewhere.

A cheeky celebration
A series of her plates take up visual themes from the house’s collection of artefacts, object and images. They are both a tribute and somewhat tongue in cheek.

Typical Van der Walt, the pieces ask to be used convivially and to be thought and talked about. “Seeking the sacred in the ordinary” she calls their motivation.

“I have been fascinated by Irma’s perception of an ‘exotic Africa’ and how it manifests itself in her work. I share, too, her interest in African masks. And so, working to these themes, was a way on engaging with her consciousness as well as her aesthetic grasp.”

In a delightful photographic image by Botha, Van der Walt is shown lying down in the sitting room, possibly taking a nap on the carpet. Hardly a thing to do, one would imagine.

But this somewhat unsettling image pretty much sums up what is a vividly appealing collaboration that shows that all good art is interactive. Somehow the living artists puts a great deal of spirit back in the dead one.

Toich turns to the old masters