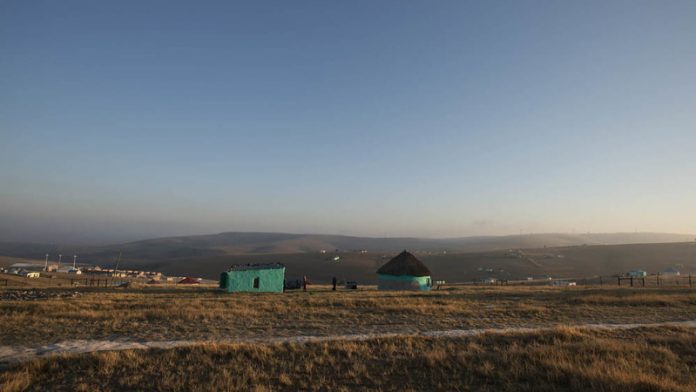 The man’s movements were deliberate as he took the microphone at the recent land tenure summit in Boksburg.

“Minister, we support this summit,” he said. “We, the labour tenants on the farms, feel the pressing hard sole of the farmers on our backs. We, who are dragged on the backs of bakkies, without protection … many of us know no other home. Our parents gave their labour as we give ours. Must our children suffer the same fate? There is no political will to ensure that the laws are adhered to, there are no mechanisms to ensure labour tenants are treated as human beings.

“We are not farm ‘workers’ or ‘dwellers’, we are labour tenants. In Limpopo, where I come from, we have no rights. Farm owners have built game reserves around us. To live in the reserve, we have to report to them … we must sign in and out. I stand here, in front of this gathering, as a man who is not fully a man. I still do not have full control of my movements. I cannot protect my family.”

In a few minutes, this elder had cut through the political and academic jargon and laid bare the reality experienced by many. His was a poignant reminder that the majority remain landless and without security. The slight tremor in his voice could not be hidden by his forcefulness. His experiences echoed those of many in the room.

The background to his speech is that the department of rural development has still not processed the claims made under the Labour Tenants Act of 1996. Litigation is now under way to force the government to implement their rights.

When the summit broke into commissions to consider separate aspects of the issue, many struggled to get beyond narratives of pain and dehumanised living conditions. People seemed stuck in the catharsis of speaking about their experiences. To imagine solutions was not impossible – but first they wanted to tell their hidden stories.

They wanted to force those gathered in the commissions to see and hear them without the protective layer of “policy speak”. This is their life, one without rights – a life of constant struggle to eke out a living and hold on to personal dignity.

Traditional leaders of different hues and statures took umbrage at the suggestion that the land belongs to the people. For them, this assertion by the government is an attempt to remove their powerful “custodianship”, which for many means control over land, people and resources.

Voices from the floor pushed back. As one delegate put it: “We live under iNgonyama Trust. We live under amakhosi [chiefs] in KwaZulu-Natal. We have no security. Other women and I work the land for our living and business. I ask you, Mhlonishwa [MEC Cyril Vusumzi Xaba], to point to one development that has been undertaken by iNgonyama Trust in the vast land under its control. Show me one project that they run for the benefit of the people.

“We need mechanisms such as papers [titles and status confirmation] to protect us. This is the age of formal documentation. Our issue is not the powers of traditional leaders. We respect them and accept their presence. But we want to exercise our rights in communal areas, too. Sesakhululeka, angithi [Isn’t it that we are free today]?”

The Khoi and the San leaders in the room had different but equivalent concerns.

One argued: “First, this meeting should have been for traditional leaders only. These [civic] organisations … should not be here. The historical overview provided by the MEC is impressive.

“Unfortunately, it excludes the Khoi and the San. We want to be recognised as people of this land. How can this history erase us? I agree with the traditional leader who spoke: the minister cannot define what our role is. We are traditional leaders and own the land. We are not just custodians.”

Another had a differently nuanced view: “We do not all want land. We do not want to control people. But we want to be recognised. We want to be treated with the dignity we deserve. The government must treat us all equally. We need to have further discussions on these things.”

The complex relationship between traditional authorities and communal property associations with land-owning rights recognised by law also came under scrutiny. Some said the associations should not be allowed, but others rejected this argument. And the government’s failure to provide support and guidance to the associations was strongly criticised.

Land intersects with a number of issues: identity, layers of authority and the economy. It is here, in the crevices of these intersections, that the granularity of lived experience, the unfinished business of democratisation, citizenship, personhood and the contradictions of our history and the present are laid bare.

The summit took place against the backdrop of the Restitution of Land Rights Amendment Act, signed into law in May. The Act allows people another five years to claim land lost under colonial rule and apartheid.

The issue of the vast areas some traditional leaders say they will claim – and the related costs – hung over the summit. Where will the money come from? Whose claims will be given priority?

The summit brought to the surface an interesting but deeply troubling legacy of South African history. The struggles of rural people have been muffled. There is a stubborn refusal to see the connections of rural struggles to the larger struggles for transformation in South Africa.

The country has a long tradition of resistance, expressed not only in sporadic moments such as the Mpondo revolt. These struggles have a context and a history; they are underpinned by the yearning to be part of a common South Africa – as seen in the struggles against forced removals.

It is urgent that all these land questions be addressed. The time has come for all the people affected by land issues to be treated equally. When the government and other powerful players recognise this, South Africa will be able to move forward and address land questions justly and fairly.

Until then, platforms such as the summit will be talk shops with no tangible results. All South Africans, irrespective of where they live, want one law for one nation, based on the Constitution. This is the agenda of our present.

Nomboniso Gasa is a researcher and analyst on gender, politics and cultural issues and a senior research associate at the Centre for Law and Society at the University of Cape Town