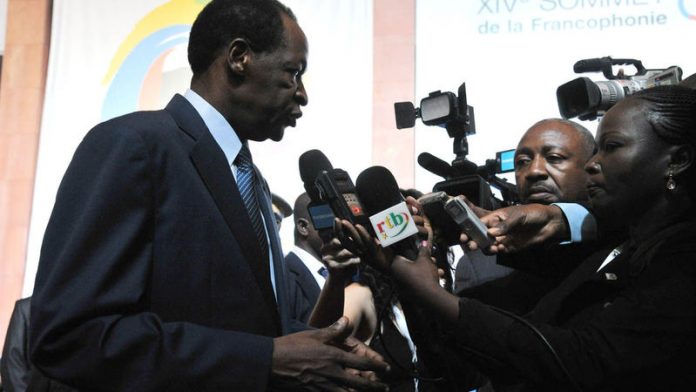 Thousands of protesters stormed Burkina Faso’s Parliament on Thursday and set fire to the building, ahead of a vote on a motion to allow the president to stand for re-election, Reuters witnesses said.

The crowd then headed towards the prime minister’s office as a government helicopter flew overhead, shooting tear gas canisters at protesters.

Lawmakers had been due to vote a plan proposed by the government to change the Constitution to allow President Blaise Compaoré stand for re-election next year, when he was due to stand down due to a two-term limit.

The country has been tense for days in the run-up to Thursday’s vote over the changes, which the European Union (EU) has warned could jeopardise stability in the west African nation.

Police and soldiers were out in force around the Parliament after mass rallies called by the opposition earlier this week.

Jeopardising stability
The EU has urged the government to scrap the legislation, warning that it could “jeopardise… stability, equitable development and democratic progress”, and called for all sides to refrain from violence.

Most deputies had not yet arrived for the vote when protesters entered the building. According to Agence France-Presse, about 1 500 demonstrators managed to break into the building.

“We did this because Blaise was trying to stay too long. We are tired of him,” said Seydou Kabre, a protester in the crowd headed to the prime minister’s office. “We want a change. He must go!”

The legislature is due to examine a proposed amendment that would allow Compaore, now in the 27th year of his presidency, to run for re-election in November next year for another five years.

“October 30 is Burkina Faso’s Black Spring, like the Arab Spring,” said Emile Pargui Pare, an official from the Movement of People for Progress (MPP), a young and influential opposition party.

Extended rule
Compaore’s bid to cling to power has angered the opposition and much of the public, including many young people in a country where 60% of the population of almost 17 million is under 25.

Many have spent their entire lives under the leadership of one man and – with the poor former French colony stagnating at 183rd out of 186 countries on the UN human development index – many have had enough.

The situation is being closely watched across Africa where at least four heads of state are preparing or considering similar changes to stay in power, from Burundi to Benin and the Democratic Republic of Congo.

Compaore was only 36 when he seized power in a 1987 coup in which his former friend and one of Africa’s most loved leaders, Thomas Sankara, was ousted and assassinated.

The 63-year-old has remained in power since then, re-elected president four times since 1991 – to two seven-year and two five-year terms.

In 2005, constitutional limits were introduced and Compaore is coming to the end of his second five-year term.

The opposition fears the new rules would enable Compaore to seek re-election not just once, but three more times, paving the way for up to 15 more years in power.

Protesters took the Parliament building after police starting shooting in the air in an attempt to disperse them. In the face of the surging crowd, police were forced to withdraw, witnesses said. – Reuters, AFP

Products for the care of babies and toddlers now essential items

In response to court papers saying lockdown regulations are unconstitutional because they do not protect the best interests of children, the state says baby care goods are now an essential item
Read more
Friday