Accusations of ‘state-sponsored’ homophobic arrests in the Gambia 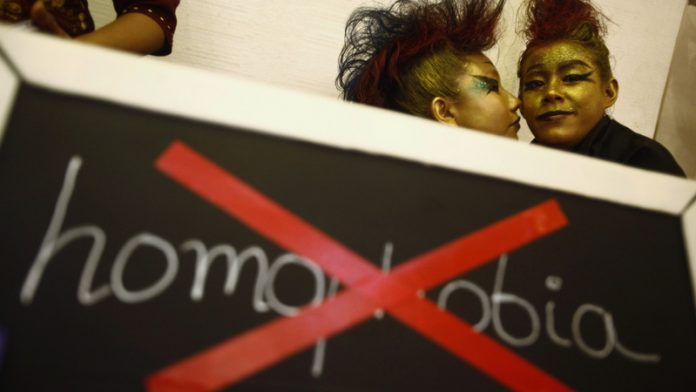 Amnesty International accused the Gambia on Tuesday of torturing citizens arrested in the latest crackdown on homosexuality in the conservative West African nation.

The human rights organisation said the country’s spy agency and presidential guard had beaten and forced confessions from five men, including a 17-year-old, and three women, since November 7.

“These arrests took place amid an intensifying climate of fear for those perceived to have a different sexual orientation or gender identity,” Steve Cockburn, Amnesty’s deputy director for West Africa said in a statement.

“This unacceptable crackdown reveals the scale of state-sponsored homophobia in Gambia.”

The women were released last week, said Amnesty, but the men are being held at the National Intelligence Agency (NIA) headquarters in the capital Banjul. They were told they were under investigation for “homosexuality”, Amnesty said, adding that they had not been charged and had been denied a lawyer.

“They were subjected to torture and ill-treatment to force them to confess their so-called ‘crimes’ and to reveal information about other individuals perceived to be gay or lesbian,” the statement said.

The torture included beatings, sensory deprivation and the threat of rape, Amnesty said. The organisation says the NIA is reportedly collating a list of names for future arrests and several targets escaped after being tipped off by relatives.

The Gambia’s treatment of homosexuals has long drawn criticism from international observers, who accuse the country, the smallest on the African mainland, of homophobia. Parliament passed a Bill on August 25 to introduce a punishment of life in prison for “aggravated homosexuality” targeting “repeat offenders” and people living with HIV.

President Yahya Jammeh has repeatedly denounced homosexuality and in 2008 even vowed to behead homosexuals – a threat he later retracted. Two weeks ago the Gambia refused United Nations monitors investigating summary executions and torture access to its prisons.

Torture in other African countries
Last month, Amnesty released a damning report that revealed Ethiopia’s government was torturing its largest ethnic group for perceived opposition to the government.

The report said that thousands of people from the Oromo ethnic group have been “regularly subjected to arbitrary arrest, prolonged detention without charge, enforced disappearance, repeated torture and unlawful state killings,” read the report based on over 200 testimonies.

One young girl said hot coals were dropped on her stomach because her father was suspected of supporting the Oromo Liberation Front, while a teacher described how he was stabbed in the eye with a bayonet after he refused to teach “propaganda about the ruling party” to students.

There was no immediate response from the government, which has previously dismissed such reports and denied any accusation of torture or arbitrary arrests.

“The Ethiopian government’s relentless crackdown on real or imagined dissent among the Oromo is sweeping in its scale and often shocking in its brutality,” Amnesty researcher Claire Beston said.

In February, Human Rights Watch (HRW) released a report revealing that hundreds of Eritrean refugees have been enslaved in torture camps in Sudan and Egypt in the past 10 years, enduring weeks or months of violence and rape, extorted by traffickers often in collusion with state security forces.

Some of the refugees died, and many have been scarred for life – both physically and psychologically – as a result of mutilation, burning, beatings and sexual assault, according to dozens of testimonies collected by HRW in the report.

The report, “I Wanted to Lie Down and Die: Trafficking and Torture of Eritreans in Sudan and Egypt”, says state authorities have failed to identify and prosecute perpetrators, and have often colluded with them in the kidnap and abuse of refugees.

Traffickers demand ransom money to halt the torture, either from the refugees or from their relatives, who are forced to listen to their loved ones screaming down telephone lines. Even after money has changed hands, traffickers sometimes sell refugees on to another group rather than release them. – Guardian News & Media, AFP.