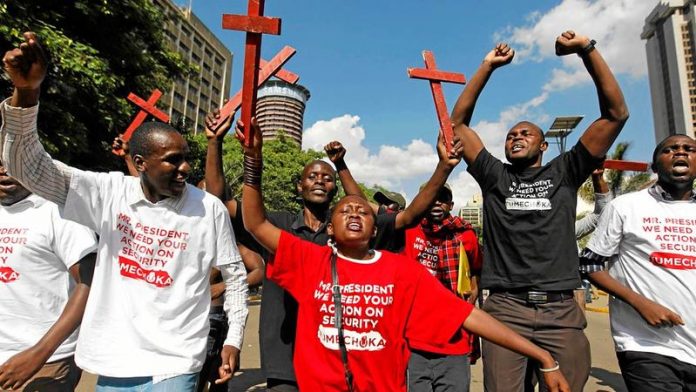 Kenyans are fleeing the Muslim-dominated north as trade unions call on civil servants to abandon their jobs after al-Shabab hijacked a bus and executed 28 people for failing to prove they were Muslim.

On Wednesday hundreds of Kenyans were stuck at various airstrips and police stations, queuing for their turn to be flown out of Mandera, which is on the Kenyan-Somalia border. In a country where religious tensions are high, people feared they could become the next to pay with their lives.

The weekend’s massacre – the third deadliest in East Africa’s biggest economy since Kenya sent its troops into Somalia in 2011– has caused a major outcry in the country.

The al-Qaeda-linked al-Shabab has claimed responsibility in a radio broadcast for the Saturday-morning killings in which gunmen spared only those who could recite the Qur’an.

The incident was similar to the Westgate shopping mall attack in September last year.

In another attack this year, at Lamu, one of the most popular tourist destinations on the Kenyan coast, about 100 men were singled out and killed, though women and children were spared.

On Tuesday teachers’ and civil servants’ unions asked their members in affected areas to leave their jobs – a move that is likely to paralyse the north.

Religious leaders and the Kenyan government have been on the frontline to rally Kenyans not to allow al-Shabab to split the nation on religious grounds. But it is mostly Christians being killed by al-Shabab and government operations appears to target Muslim clerics, further widening the rift.

After hijacking the bus, which had 58 passengers on board, they drove to the Somalia border but the vehicle got stuck on a muddy road. The passengers were then pulled out of the bus one by one, and asked to prove they were Muslims. Those who failed the test were told to lie face down and were shot – most of them in the head.

In total 19 men and nine women were killed.

Most of them were teachers, healthcare workers and police officers working in the war-torn region.

In the past 40 days, the northern part of the country, which borders Somalia, has witnessed about 10 terror attacks.

The killing came just days after Kenyan security officials raided four mosques in the coastal town of Mombasa and shut them down after they allegedly found “terrorism-related materials”.

Al-Shabab says the Mandera attack was in retaliation for the closure of the mosques.

The government denied it was taking over mosques, insisting it was only a security operation and that it was operating within the law.

“This claim is false. Our security forces have not taken over any mosques and the government has no intention to take over any religious institution,” said Deputy President William Ruto.

“However, as all Kenyans are aware, for some time now houses of worship, more so mosques, have been turned into planning and logistics centres for al-Shabab-affiliated gangs.

“A number of Kenyans, including four imams, have lost their lives in attacks planned and executed through these unholy alliances and conspiracies thereof. Many others presently live in fear owing to threats made to them from the mosques by criminal gangs.”

Ruto said that during the raids the police found the mosques had been converted into armouries where guns, grenades, bomb-making materials and crude weapons (including machetes and knives), were stored. They also allegedly found propaganda literature and al-Shabab insignia including flags and manuals.

A senior official at the police unit said all public transport vehicles in the conflict zones would be accompanied by police, in a move to start paying more attention to the vulnerability of millions of Kenyans who rely on public transport.

Initially, the public was largely spared as most of al-Shabab’s attacks were on police vehicles.

But then several buses and bus depots were also attacked, in a strategy by al-Shabab to frighten commuters – and to score high targets.

In May, two buses just outside Nairobi were bombed in a twin attack that left three people dead.

The attackers’ modus operandi is to hurl grenades at buses, plant landmines on the roads, or detonate bombs in 1moving cars.

Moving vehicles appear to be another preferred target of al-Shabab as data from Kenya’s anti-terror police unit shows there have been more than 22 such attacks since October 2011, when Kenya sent 4?000 troop into Somalia to fight alongside African Union troops.

Kenya’s decision to contribute troops to the AU military mission in Somalia has seen the country become a key target for revenge attacks as al-Shabab puts pressure on countries in the region to withdraw their troops.

The Kenyan government said it was doing its best and that, following the Mandera bus attack, it had responded with airstrikes, pounding the attackers.

“Two successful operations were carried out against the perpetrators of these murderous executions across the border,” Ruto said in a statement.

“Our retaliatory action left in its trail more than 100 fatalities. It also destroyed four technicals [pick-up trucks with anti-aircraft guns] and the camp from which this crime was planned.”

Images of the airstrikes released by the government’s social media handlers caused a controversy after allegations that they were not current images.

The government has strongly denied this.