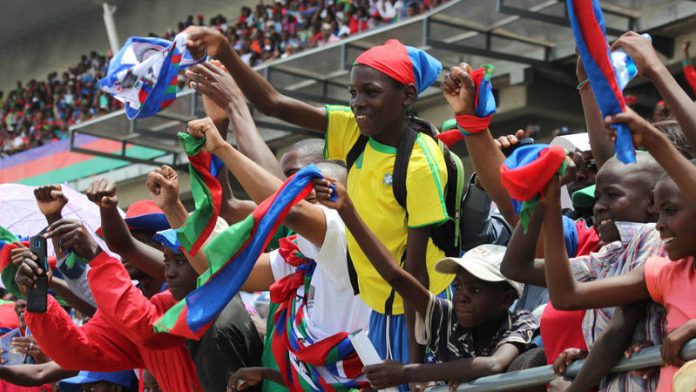 Swapo’s overwhelming majority could suffer in the Namibian elections scheduled for Friday November 28, in the wake of a rebellion among its youth wing members over the sensitive issue of land.

The backlash started when the ruling party suspended its youth league spokesperson, Job Amupanda, after he had grabbed land in one of Windhoek’s upmarket suburbs.

Amupanda moved on to a vacant lot in Kleine Kuppe, which he named “Erf 2014”, and started clearing the ground. He was protesting against the Windhoek city council’s allocation of plots to well-off individuals at discounted prices.

Citing “affirmative land repositioning”, he also mobilised large numbers of landless people to apply to the council for plots, warning that there would be unrest unless they received a favourable response.

Last week, hundreds of people gathered at the council’s offices to submit 14000 applications for land. The municipality was given a July 2015 deadline to respond.

Amupanda, a fan of Economic Freedom Fighters leader Julius Malema, has captured the hearts of many landless Namibians with his stance.

This land uproar comes after the Windhoek council recently sold a plot to the Big Brother Africa 2013 winner, Dillish Mathews, at a discount.

Discounts for family
Another plot valued at R8-million was sold to the son of the city’s mayor, Agnes Kafula, for R5-million last year. It has also been reported by the Namibian that Kafula sold herself a N$1-million plot in Kleine Kuppe for only N$600000.

Mathews confirmed the transaction, saying that she would accept any land offered to her. Kafula’s son, David, did not comment, but his mother denied any wrongdoing, saying that the Local Authorities Act did not prevent councillors’ relatives from “participating in the work of municipalities”.

Asked about her own acquisition of a discounted plot, she said that she had followed procedures and had done nothing illegal.

It has been reported, however, that they failed to secure the approval of Swapo’s central committee and politburo for the suspension, as required.

Phanuel Kaapama, head of the politics department at the University of Namibia, said the land issue could work against Swapo in this Friday’s combined presidential and parliamentary elections.

“Swapo’s levels of mismanagement, the impoverished people’s burning desire for land and the privileged treatment of certain people suggests that the party does not take the votes of the poor very seriously,” said Kaapama.

He said the timing of Amupanda’s land protest might have further unsettled the party if opposition parties had cashed in on it by taking Swapo to task. However, they have failed to do this, he said.

Loyalty trumps delivery
The Institute for Public Policy Research (IPPR) recently reported that 70% of Namibians think the government has failed to create sufficient jobs. It listed unemployment, poverty, land and housing as the country’s biggest grievances.

Recently released government statistics claim that formal unemployment is running at 27%, but the real figure is almost certainly higher. House prices have recently escalated because of high demand, putting property further out of the reach of most citizens.

Offsetting these factors is the traditional deference of voters to Swapo, the party of liberation. The IPPR survey showed that Namibians vote more out of loyalty than decisions on the government’s service delivery record.

Kaapama pointed out that, in its election campaigning, Swapo continues to use the narrative that it brought independence to Namibia. With the election in mind, the Swapo government launched a mass housing programme last year. Although it is running behind schedule, the scheme aims to build 9000 low-cost houses by next year.

The party has won convincing majorities since independence in 1990. It has 54 seats in the 96-seat National Assembly and dominated by-elections earlier this year.

Also working in Swapo’s favour is the weakness of the opposition. Kaapama said many people would vote for Swapo not because they can see tangible change but because they believe they have no alternative.

The Rally for Democracy and Progress, Namibia’s largest opposition grouping with eight seats, could suffer because of its failed legal challenge to the use of the electronic voting machines, Kaapama said.

*See “Landmark e-voting to go ahead after court challenge fails”

Rising stars
But the Democratic Turnhalle Alliance (DTA) of Namibia, which has two seats in the National Assembly, could increase its share of the vote because of its creative campaigning methods, he said.

DTA president McHenry Venaani lived for three days in a shack in Windhoek’s Ombili informal settlement and rode municipal buses to test the experience. His relative youth – he is 37 years old – could also attract support.

The director of the IPPR, Graham Hopwood, said Swapo’s presidential candidate, the popular Geingob, could also prove a vote-winner for the party in Friday’s polling. Geingob is a member of the minority Damara ethnic group, has a vibrant personality and projects himself as proponent of reconciliation between Namibia’s many races and ethnicities.

The growing proportion of young voters could also start to tilt electoral balance. Statistics from the Electoral Commission of Namibia show that 44% of registered voters are aged 18 to 34. Hopwood said this might create the conditions for a new political party to emerge.

Namibia’s political stability so far has been vested in the dominance of Swapo. Those opposing its control face an uphill battle
Read more
Africa

Namibia votes in a general election on Wednesday. Here are the four frontrunners
Read more
Opinion