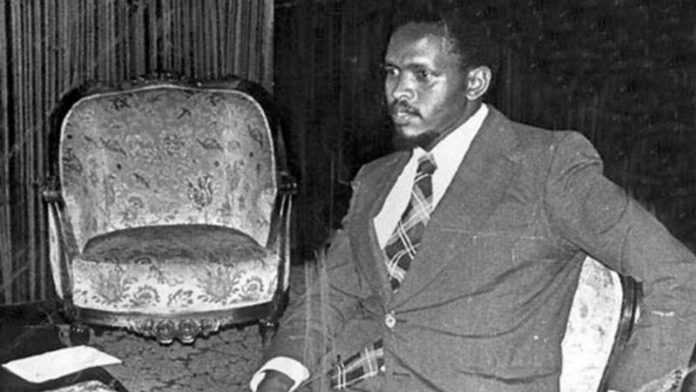 Sipuye told the M&G, “The next step [for the foundation] is to try and get the seller to hand over autopsy report.” The Steve Biko autopsy report, labelled item 101 on the Westgate Walding auction house catalogue, had a reserve of R70 000 to 100 000.

Urgent interdict
Yesterday, the Biko Family and the Steve Biko Foundation filed an urgent court application after discovering that an original autopsy report of the late Black Consciousness Movement leader Steve Biko is scheduled to be sold at an auction on Wednesday in Johannesburg.

Biko’s family and the foundation filed an urgent application opposing the auction of Biko’s post mortem report as well as that of another activist, Ahmed Timol.

Yesterday marked 37 years since the South African police were cleared of charges related to the killing of Biko.

#TodayInHistory: 02 Dec.77 – Due to insufficient evidence South African police are cleared of charges with regards to killing of Steve Biko

“The Biko Family, together with the Steve Biko Foundation, strongly oppose the sale of this historic document and have filed an urgent court interdict to prevent its sale,” the foundation said in a statement on Tuesday.

The family argues that the document is the property of the Biko family and the Steve Biko Foundation and should not be sold  for private gain by third parties.

“We are challenging this. We are trying to get the auctioneers to hand over the documents to the Biko family,” said Sipuye. On its website Westgate Walding says the Biko documents from 1977 contain certificates from pathologists, a certificate in terms of the Criminal Procedure Act of 1977, and the post mortem report.

The report consists of 43 pages. The photographs referred to in the text are not present, but the autopsy report on Biko’s brain has the “cyclostyled” signature of Dr Neville Sydney Proctor on each page. Proctor was an anatomical pathologist from the University of the Witwatersrand. “It is unknown if another copy of this document exists. The history of the document is of interest,” Westgate Walding says on its website.

It was given to Maureen Steele, Dr Jonathan Gluckman’s personal secretary from June 1969 to February 1978. Gluckman was one of the pathologists appointed by the Biko family. “Dr Gluckman was very concerned about the safety of such documents as his offices had been bugged and he had received numerous death threats. He therefore asked Mrs Steele to keep the copies of such documents,” says Westgate Walding.

Sipuye said Steele recently died and the documents went to her children, who did not want them. It was unknown if the children gave them or sold them to Westgate Walding. “It is the contention of the Biko family and the Steve Biko Foundation that this document is the property of the Biko family and should not be sold for private gain by third parties,” said Sipuye.

Biko’s son Nkosinathi Biko expressed anger at the attempt to auction the document. “The autopsy report of any deceased person is central to the dignity of the deceased,” he said.

“An action by an unrelated party that amounts to auctioning off national history for private commercial reasons fails the nation at the level of morality and decency, and certainly fails at honouring the memory of those who laid their lives down for that very nation.”

He wanted the document to be preserved. Bidding on Biko’s autopsy document was meant to start at R70 000 and Timol’s at R20 000.

On August 18 1977, Biko was arrested at a police roadblock under the Terrorism Act No 83 of 1967 and interrogated by the security police, including Harold Snyman and Gideon Nieuwoudt. The interrogation took place in the Sanlam Building in Port Elizabeth.

The interrogation lasted 22 hours and included torture and beatings resulting in a coma. Biko suffered a major head injury while in police custody at the Walmer Police Station, in a suburb of Port Elizabeth, and was chained to a window grille for a day.

On September 11 1977, police loaded Biko in the back of a Land Rover, naked and restrained in manacles, and drove 1100 km to Pretoria.  He died shortly after arriving at the Pretoria prison, on September 12.

The police claimed Biko’s death was the result of an extended hunger strike, but an autopsy revealed multiple bruises and abrasions and that he ultimately succumbed to a brain hemorrhage from the massive injuries to the head, which many saw as strong evidence that he had been brutally clubbed by his captors.

Donald Woods, a journalist, editor and close friend of Biko’s, along with Helen Zille, later leader of the Democratic Alliance political party, exposed the truth behind Biko’s death.

The document is described by the auction house as: “The Steve Biko Autopsy Report, Pretoria 1977, in original ruled paper covers, pale green pages, containing certificate from the relevant  pathologists, Certificate in Terms of the Criminal Procedure Act of 1977 and the  Report of the Medico-Legal Post Mortem, this copy is not signed and the  photographs referred to in the text are not present, however the autopsy of Biko’s brain has the cyclostyled signature of Dr NS Proctor on each page, the autopsy consists of 43 pages, a unique document of the struggle era of great historical importance that gives the full details of the autopsy/post mortem.” – Additional reporting by Sapa