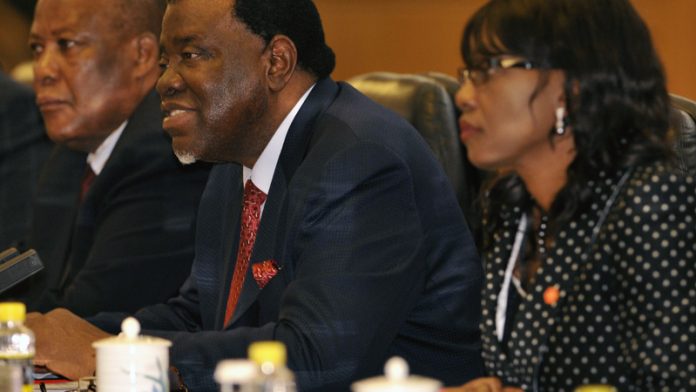 Geingob (73) who ran on a platform of “peace, stability and prosperity”, becomes president-elect of the vast desert nation in southwest Africa with a massive haul of 87% of the vote.

“It’s the will of God that the people of Namibia came out in big numbers and thought that I should take over,” he said.

“I have a heavy responsibility that I cannot do only on my own. I will be a president of all Namibians. No Namibians will be left out.” In the race for the legislature, Swapo took 80% of the vote, winning 78 of the 96 seats in the national assembly.

Becoming the strongest opposition party in Parliament, the Democratic Turnhalle Alliance won five seats, with 4.8% of the vote.

The former main opposition, the Rally for Progress and Democracy, saw its percentage of the vote cut from 11% in the last election in 2009 to 3.15%, winning just three seats.

Forged in the anti-colonial and anti-apartheid struggle, Swapo has won every election since Namibia’s independence in 1990.

Already an overpowering force in Namibian politics, the party managed to improve on the 2009 elections, when it received 75% of the vote.

Outgoing President Hifikepunye Pohamba said: “The people have spoken. Democracy is alive. I urge all our people to respect and honour the voice of the people.”

First e-vote
The African Union (AU) applauded the elections as free and fair.

Ambassador Fatuma Ndangiza, head of the AU election observer mission, gave Namibia a thumbs up for conducting the elections in “a peaceful environment, free from violence and intimidation”.

But she suggested Namibia’s electoral commission “consider simplifying polling station procedures” and ensuring staff were trained in how the electronic voting machines worked.

Opposition parties complained that thousands of voters were turned away from polling stations Friday because of technical difficulties.

Observers from the Southern African Development Community (SADC) also gave the vote their stamp of approval.

Opposition parties had launched an 11th-hour court challenge just days before the election to stop the electronic vote from going ahead, saying the use of the voting machines could facilitate vote rigging.

But the Windhoek High Court dismissed the application.

About 72% of the 1.2-million eligible voters turned out to cast their ballots on Friday on nearly 4 000 electronic voting machines.

Other African countries have run pilot or limited e-voting, but none have done so on this scale.

Like many of Africa’s liberation movements, Swapo has become a big-tent party that spans the political spectrum and often seems more involved with intra-party politics than voters.

Supporters say that allows for continuity, but critics say it brings stasis.

Economic growth is forecast at around four percent for this year, yet one in four people is out of work, according to the government’s narrow definition.

The economy remains dependent on diamond and uranium mining. – AFP

31 years after independence, Namibians aren’t in a festive mood