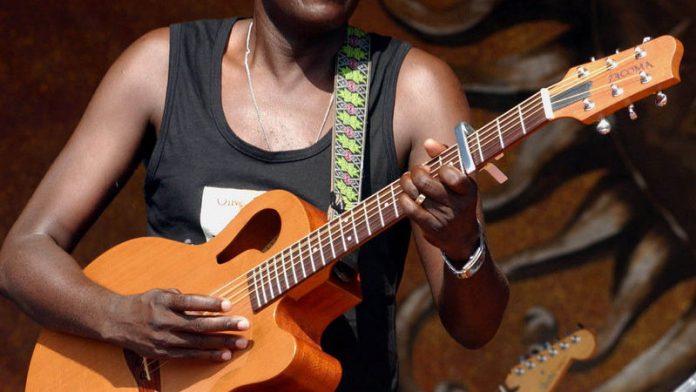 “It’s not really what we achieve but what we overcome.” His eyes flickered for the first time as those words poured out. The room full of people thirstily drank them in, as though a dam had just been filled in a parched village.

Surviving in a sea of stress is Zimbabweans’ most endearing quality and to hear the man who has come to represent them say those words served as confirmation. Oliver Mtukudzi had spoken and Harare Sports Club’s Centurion restaurant was listening.

Such careful attention is seldom paid to performers in that venue. Attached to the cricket ground, it is essentially a pub where some patrons keep an eye on the game outside and others on the games being shown on the television screens – and where everybody has an opinion about all of them.

When Sam Mataure – Mtukudzi’s manager, who also plays the drums in his band – and Enock Piroro, the bass guitarist, kept busy for about half an hour before the performance, setting up their equipment and testing the sound, they did so over a constant hum from the audience. The hundred or so people were only silent when “Tuku” arrived.

He must have known the size of the audience and that he had to be barely audible at the start to entice them into silence, so that is what he did. His voice somehow matched both his small frame and his imposing presence – it remained delicate enough to go almost undetected but authoritative enough to demand one’s ears.

Tuku has as many albums as he has years on this earth – 62 – behind him, so to a new listener, identifying each track was impossible. But what was clear was the tenderness. With notes that sounded like a waterfall, Mtukudzi introduced himself as a gentle, caring musician. He held the balance between making eye contact and remaining detached as he carefully tiptoed through his opening songs. He refused to put his foot down any harder, instead allowing the gradually growing connection between artist and audience to form.

Once Mtukudzi was convinced it was strong enough, he upped the tempo. His inflections raised along with his eyebrows; his voice shook as much as his hips. He was getting into it. So were we. Suddenly the sounds that are synonymous with Tuku’s music were flooding the space: Mai Varamba, Todii and a haunting ­rendition of Neria, which brought everyone to their feet.

Some rocked gently, some closed their eyes so the music could sink in and others held their hands on their hearts as though it were an anthem. Everyone sang the chorus.

From the front row, the tear nestled in the corner of Tuku’s eye was glistening. Its cousin could not stop itself from rolling down my cheek. It was not a sad streak of saltiness, but an overflow of emotions stirred up by a singer who knows how to both smile and scowl through sound.

That evening, Tuku walked us through a journey that jolted the senses. He reminded us why he is a symbol of the best of Zimbabwe and how he, like the country he is from, has measured his life not by his achievements, of which he has many, but by his resilience.

The death of his son, Sam, in 2010 was his most recent and most severe loss, but he came back from it strongly enough to keep singing.

And sing he did. For more than two hours, à la Bruce Springsteen, Tuku performed without stopping and we wished he never would.

Then, at around 10.30pm, the lights dimmed and he disappeared. “Tuku, Tuku, Tuku,” we called after him, hoping for an encore. None came. He left us with only the music.