The Sars purge and the ANC election T-shirts 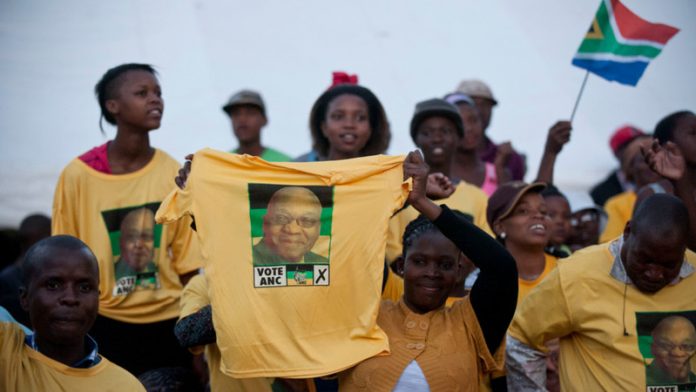 Holding up a multimillion-rand consignment of ANC campaign T-shirts before the April elections was one of the factors that fed into the leadership purge of the South African Revenue Service (Sars), amaBhungane has been told.

The allegations have turned the spotlight on a Taiwanese-born South African businessperson, Jen Chih “Robert” Huang, who has links to the Zuma family.

Three sources, who spoke on condition of anonymity, say Huang was instrumental in supplying a huge consignment of T-shirts from China to the ANC before the elections. They say the consignment was stopped on entry to the country pending the payment of duties and taxes.

They claim that Zuma’s legal advisor, Michael Hulley, who previously worked for Huang’s Mpisi Group, personally contacted the then acting Sars commissioner, Ivan Pillay, to try to have the consignment released.

“Ivan refused to be bullied. They had to pay,” one of them said.

Go-between
Hulley previously served as a go-between for the ill-fated Aurora mining group when Huang was trying to solicit Chinese investment for the company, which was chaired by Zuma’s nephew Khulubuse.

Hulley did not respond to questions.

Huang’s former lawyer, who previously represented the businessperson in an ongoing R540-million tax dispute with Sars, said he was under the impression that Hulley’s law firm had taken over Huang’s legal matters.

Huang did not respond to questions.

The ANC treasurer’s report, obtained by the Mail & Guardian, shows the ANC spent R118-million on campaign T-shirts, of which R41-million was customs duty.

It is not clear whether the Huang consignment made up all or only a part of the total imports.

Yellow T-shirts
The ubiquitous yellow shirts sporting President Jacob Zuma’s smiling face was perhaps the most memorable feature of the ANC’s budget-busting election campaign this year, and Sars’s action must have stung.

The roots of Pillay’s journey from struggle hero (he was a key member of the ANC underground) to political outcast go much deeper than the T-shirts saga.

They are bound up with the drama surrounding Sars’s head of investigations, Johann van Loggerenberg, and the activities of the Sars intelligence unit he headed, one of whose targets was Huang’s Mpisi group.

After an initial probe in 2010, driven by the national research group that reported to Van Loggerenberg, Sars launched a full-scale investigation of Mpisi in 2013, leading to a R540-million preliminary tax claim against Huang and an interim preservation order freezing all his assets.

Suspension
New commissioner Moyane announced the suspension of Pillay along with that of the group executive of strategic planning and risk, Pete Richer, pending a disciplinary process. He held them responsible for the functioning of the unit.

They joined Van Loggerenberg, who was suspended last month following media reports suggesting he had presided over a “rogue unit” that had “spied on Zuma”.

Pillay, Richer, Van Loggerenberg and Barry Hore, the institution’s chief operations officer, who resigned last week, are regarded as part of a leadership cohort put together by former Sars commissioner Pravin Gordhan, who kept Sars under his wing when he became finance minister in the first Zuma Cabinet. But that changed abruptly after the elections when Zuma shifted Gordhan to the local government portfolio.

The arrival of Moyane, appointed by Zuma in September, appears to have set in motion a process to sweep out the Gordhan-era team, driven by blatant media leaks, which provided the justification for the dissolution of the entire eight-person Sars executive committee and the subsequent action against Pillay, Richer and Van Loggerenberg.

Moyane acknowledged that his actions were in part motivated by the media scandal.

‘After people’
A source close to Pillay said: “People close to Zuma in the intelligence sphere have been telling him that Sars must be brought under control because they were ‘after people’.

“Ivan always countered that they were never after individuals, but used risk analysis to determine where and when to start investigating.

“But in these past months it became increasingly clear that that answer was not satisfactory. The problem was that Sars was not under anybody’s control and that had to change.

“The message was very clear that they wanted Ivan and his team out, long before the whole affair with Belinda Walter started.”

Walter is an attorney who previously chaired the Fair-Trade Independent Tobacco Association (Fita), which represented smaller tobacco firms that have frequently been the target of the tax authorities.

It emerged that, during this time, she had acted as a secret informer or agent for the State Security Agency (SSA), as well as for British American Tobacco (BAT), the dominant player in the local cigarette market and the direct competitor of Fita members.

Covert recording
As Fita chairperson, she sought a meeting with Van Loggerenberg but later admitted that, when she first met him in September 2013, she was covertly recording him for the SSA. This illustrates why he, and Sars more generally, came to be treated as an adversary by other state agencies.

On October 25 that year, Van Loggerenberg and Walter began an intimate relationship, leading her to disclose her role in the SSA.

It is now common cause that Van Loggerenberg also disclosed aspects of his Sars work during their relationship.

In January this year, after an argument, Walter made allegations about Van Loggerenberg to Fita members, but later retracted these when the couple made up. At that stage, Van Loggerenberg formally disclosed their relationship to Sars.

Following the final breakdown of their affair, Walter lodged a formal complaint with Sars in August, accusing Van Loggerenberg of “illegal interception of my communications by Sars illegal covert team/unit as headed by [him]”, as well as disclosure of taxpayer confidential information both to her and to the media.

Following an internal investigation, Pillay appointed a panel led by advocate Muzi Sikhakhane to examine her allegations. His report, delivered on November 5, served as the justification for suspending Pillay and Richer.

Tight embargo
The report has been kept under a tight embargo but, according to a person who had professional access to it, the inquiry found no evidence linking Van Loggerenberg to the illegal interception of Zuma, Walter or anyone else.

But he is criticised for his failure to manage the conflict of interest inherent in his relationship with Walter, for which the panel recommends disciplinary action, and for his allegedly unauthorised interaction with the media.

But the assessment of the source, who has no allegiance to Van Loggerenberg or Pillay, was that the panel’s condemnation of the so-called “rogue unit” was legally and factually superficial, provided little or no evidence against Pillay, and showed they did not even interview Richer.