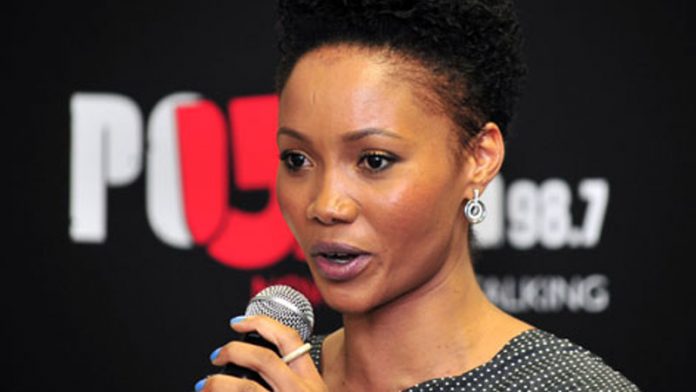 Radio host Azania Mosaka is hanging up her earphones and bidding Power FM and the airwaves goodbye having been with the Johannesburg talk radio station since its inception in June last year.

Some reportedly resigned as a result of what was described as contractual disagreements, but sources claim presenters were not given contracts before joining the station.

The sources claim some of the station’s on-air talent remain without contracts almost a year and a half after the station went live for the first time.

Mosaka did not confirm or deny rumours that she was one of the many presenters who remained without contracts because of certain clauses they would not agree to. She says her decision to leave was informed by a desire to focus on her business interests.

Mosaka said her stint at the station had been an “amazing experience” but her growing nail salon business was demanding more of her time.

On whether or not she would seek to get back into radio, Mosaka says: “If the right opportunity presented itself, absolutely. I don’t think I can stay away for too long.”

Management has not kept its promise
When McKaiser left Power FM two months ago, the station released a press statement claiming there were several issues they could not agree on and therefore had to let McKaiser go.

He was replaced by eNCA news anchor Iman Rappetti.

One of these issues, sources told the Mail & Guardian , include the fact that management had not kept its promise to give staffers contracts shortly after the station began broadcasting.

One former producer claims to have worked at the station for several months with only a letter of appointment as proof of employment. He wasn’t the only one.

Sources say seasoned broadcaster Siki Mgabadeli’s reason for resigning was a long-standing dispute with management stalling on her repeated requests for a contract.

She is said to have sought a second contract as on-air presenter having initially been hired as business editor.

The request to go on-air came at a later stage and she is said to have reluctantly agreed to do so. While she eventually agreed, her demands for a separate contract as a presenter fell on deaf ears.

A year into broadcasting, sources say Mgabadeli never saw a penny. Mgabadeli did not want to comment on her reasons for leaving when contacted by the Mail & Guardian .

On Mosaka’s resignation another former presenter Chris Vick, who left the station earlier in the year, said it wasn’t surprising that Mosaka would want to leave.

“It must have been extremely difficult to have gone from Metro FM with such a big listenership and come to Power FM, which has a really small audience in comparison.”

A few months ago, Vick alleged on Twitter that Power FM was up for sale as a result of its failure to attract advertising.

Given Mkhari, who owns the station through his MSG Group, poured water on these allegations, claiming the station was not experiencing a financial crisis and was not being sold.

But sources say it would be in the station’s best interest that it changed hands.

“What is happening at Power FM is a talent management crisis,” one source said on condition of anonymity.

“Most people joined Power FM because they believed and still believe in the project of creating the country’s first black-owned talk radio station. It could still survive if it was well run.”

Mkhari stands accused of being egotistical and of isolating those who muster the confidence to raise their concerns over how the station is run.

The station’s executive director Andile Khumalo said he would not comment on the allegations leveled at the station because they were “not new” and had been addressed in the media before.

In a statement on Mosaka’s resignation, Khumalo states: “At Power (sic) we preach the culture of entrepreneurship and Azania has taken the risk of building a business from the ground up, thereby taking absolute control of her future. We wish her well and she will remain a member of the extended Power (sic) family.”

Thabiso Sikwane will be replacing Mosaka in the Power Lunch slot, starting January 12 2015.