Community klaar with Finnish mine 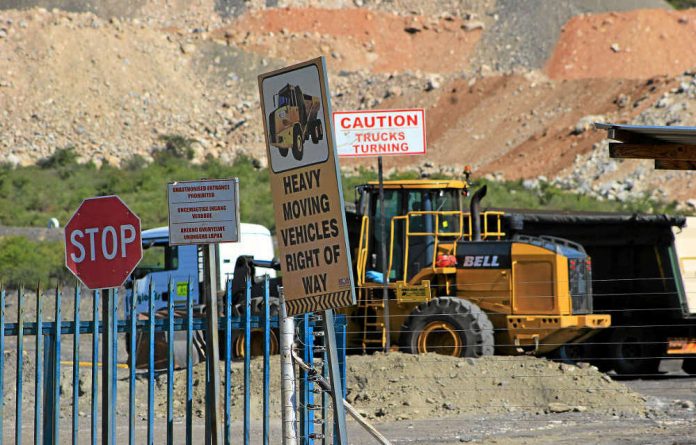 A major foreign-owned chrome mine in Steelpoort, Limpopo, has been paralysed for seven months because of a violent succession battle in the traditional community that owns the land on which the mine is located.

The Mecklenburg open-cast mine was closed in early June this year after unrest that threatened employees and contractors, its owner, Afarak South Africa, announced at the time.

Attempts to reopen it last month were abandoned after the community burned tyres and blocked the R37 highway between Polokwane and Burgersfort.

Alistair Ruiters, Afarak’s executive chairperson and a former director general of trade and industry, said the closure had cost the company half its chrome output. During sporadic unrest since May, roads had been blocked and trucks attacked, and protesters had marched on the mine, threatening security personnel.

It is understood that the regent of the Magadimana-Ntweng traditional community, Diphala Asnath Ntwampe, fled to Polokwane earlier this year after her house was attacked. She is under 24-hour police guard.

The high court has ordered some members of the royal family not to interfere with her or her family, and “not to come [within] five metres of her residence”.

The public order policing unit has been brought in to bolster local police. The Finnish-owned mine produced between 10 000 and 15 000 tonnes of chrome ore a month after it was commissioned in July 2013, with a total value of about R100-million.

Scara told amaBhungane that Diphala could not rule because she was married to another royal family member when she was brought in as a “candle wife” to bear the kgoshi a successor. He also said Justice was not the kgoshi’s son.

The case is expected to be heard by the Pretoria high court in February next year.

Also pivotal to the battle are royalties and rent paid by Afarak to Diphala, which the Scara faction claims have not been used to fund community projects as intended and which Diphala is using to fight her court battles.

Ruiters said that, initially, the company could not find anyone to sign a lease agreement. Eventually, the company reached a deal and a social and labour plan with Diphala as the apparently legitimate representative of the Magadimana-Ntweng.

He said Diphala asked Afarak to buy her a house and a car but the company refused, although it did agree to pay the educational fees of her children.

But the company had suspended all payments to Diphala’s lawyer, Leruma Thobejane, at the request of the other faction.

Refusal to account
Ruiters said the company wrote to Thobejane requesting information about the use of the money but the latter refused to provide it. “In terms of the agreement he does not account to us,” he said.

Afarak had since created a separate account into which all payments and interest would be placed. This would revert to community control once the conflict was resolved.

Under the deal between Diphala and the company, which amaBhungane has seen, the community was to receive R2-million for access to the mine, plus a R50 000 monthly rental and royalties of R1 a tonne of chrome ore mined. This amounts to R2.6-million over the 10 months of operation.

Asked about Afarak’s payments, Diphala at first she said she would only comment in the presence of her attorney and Afarak representatives. Then she said: “The company was not paying us; we were still in negotiations.” Finally, she said: “The money is still in the attorney’s account and has not been used. We have long-term plans about that money.”

Ruiters said Mecklenburg was initially closed after the anti-Diphala faction complained about blasting. The company brought in the mining regulator who cleared it as acceptable.

Other objections followed, including that the company had no permit to mine and blasting was damaging houses.

Finally, a comprehensive agreement was signed with the anti-Diphala group. But Diphala’s supporters rejected it, saying the company had to talk to the regent.

Mining operations stopped
Ruiters said the company had kept the mine closed because it had a responsibility not to encourage violence. But Afarak was not thinking of pulling out. “Mining is long-term. We have the rights and we’re not going to walk away,” he said. “We must be patient and continue engaging with everyone to find a solution.”

He added that the money had never reached the tribal account.

The Mecklenburg police station spokesperson, Constable Mmatlou Setati, said some community members were unhappy about the committee appointed to deal with Afarak, which they saw as representing the interests of certain individuals, especially Diphala.

In an interview, Diphala dismissed the claim that she was simultaneously married to the former kgoshi and another royal. “I got married to the king in 1980; I was never married before,” she said. “The sole reason for the unrest is gender bias. People look down on women and feel insulted that they are being led by a woman.”

In 2010, Diphala won a declaratory order in the Pretoria high court, opposed by the former Limpopo premier, Cassel Mathale, that she is entitled to act as regent until Justice turns 25. But her opponents have since approached the court to overturn the judgment.

Ruiters also said, over the past 18 months, there had been an upsurge in demands from rural communities at all Afarak’s mines. “It’s not just about benefits. People have become more aware of their rights.”

Amcu: Sibanye strike will go ahead

Editorial: Fifa must say no to cagey Tokyo