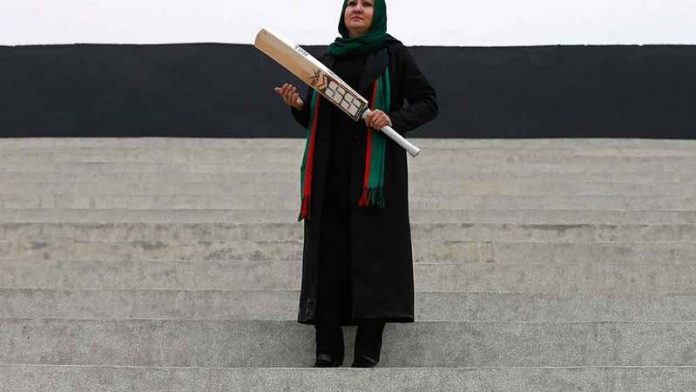 The story of Afghan cricket is a rare bright spot in the troubled country’s recent past, full of unlikely successes and glory that have helped unify a divided nation. Unless you’re a woman player.

A national women’s cricket team formed in 2010 with some fanfare was quietly dissolved this year amid Taliban threats, insecurity and conservative beliefs that led to a shortage of players.

“It does not exist,” said the newly appointed chairperson of Afghanistan’s cricket board, Nasimullah Danish, when asked about the team. “The situation is not very much prepared for developing women’s cricket in Afghanistan.”

Activists say the fate of the squad is indicative of a wider lack of institutional support for women in sport in a country where many men are deeply uncomfortable with the idea of their sisters and daughters competing in public.

It is also a reminder of the ambiguous results of millions of dollars spent by donors on women’s development in Afghanistan – a problem detailed in a December report by a United States watchdog on spending in the country (http://bit.ly/1wOLDzX).

“Afghanistan’s cricket board does not support cricket for women, even though I have 3 700 girl cricketers across Afghanistan,” said Barakzai, who, like many other Afghan cricketers, learned the game as a refugee in Pakistan and says her mission is to teach more women to play.

“I hope their attitude will change,” she said.

Big dream for men’s game
Danish is dreaming big for the men’s game.

He wants to make Afghanistan a top cricketing nation within 10 years, from having next to no base a decade ago. Since 2000, when the Taliban ended a ban on the sport, cricket has developed rapidly, with an Afghan league and a men’s team that has made its mark internationally.

When the men’s team qualified for the 2015 World Cup in Australia, street celebrations broke out across Afghanistan, highlighting the power of sport to unite the fractious country.

For many young Afghans, sports stars are the first heroes they have known that are not carrying Kalashnikovs.

Taliban threat
But Danish will also have to help build up the women’s squad if he is to achieve his goal of making Afghanistan a full member of the International Cricket Council by 2025, since a national women’s team is one of the criteria for joining.

He drew a sharp breath, however, when asked about developing the sport for women, which he insists he supports fully.

“[The Taliban] said ‘you should not develop women’s cricket, it is not in Islam, it is not in Afghanistan culture. If you do so, we will not be responsible for your players’,” Danish said, describing a threatening phone call from the militants.

Resistance from conservative families who don’t want their daughters to play adds to the challenge, he said in his bustling office in Kabul Cricket Stadium.

Danish accused Barakzai of running the team, which included members of her family, for personal interest. Barakzai laughed at that suggestion and accused the board of misusing U.S. aid money.

Danish said he was investigating the administration of the board under the former chairperson he took over from last week, but that he had not uncovered evidence of corruption.

Talent pool limited
Insecurity adds to the problems for women, said Tuba Sangar, who now heads the women’s department at the cricket board, and it meant skilled sportswomen from across the country do not get a chance to play, limiting the talent pool.

“Every day, every week there are bombs, when these security problems are happening, how can the families deal with it? They don’t let their daughter come and play cricket,” said Sangar.

She says the board has been supportive of her attempts to revive the team, but that the lack of players and coaches means it will take time before Afghan women are ready for cricket internationals.

Heather Barr, Human Rights Watch’s senior researcher on women’s rights in Asia, said the commitment of the government to women’s sport was “cosmetic” and aimed at pleasing aid-donor nations.

“Unfortunately, it’s part of a broader pattern of the Afghan government promising the moon on women’s rights … while making little effort to follow through and sometimes sabotaging efforts from behind the scenes,” Barr said.

The collapse of the squad has not ended foreign donor support for women’s cricket. In June, the US Embassy announced a $450 000 grant to promote the sport through a training exchange with players from India and Pakistan. – Reuters