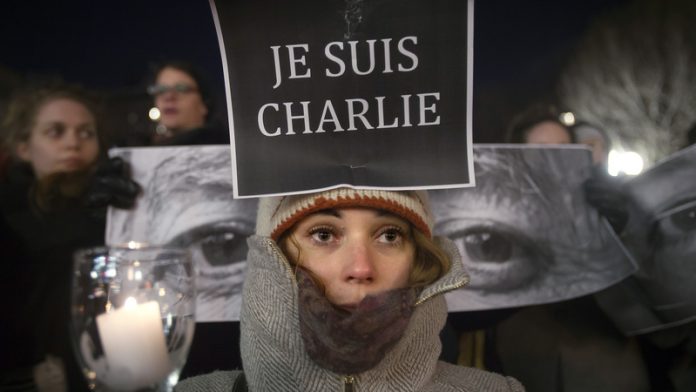 French security forces on Thursday launched a massive manhunt for two brothers suspected of killing 12 people in an Islamist attack on a satirical weekly in Paris, the deadliest attack in France in half a century.

Police released the following picture of the two suspects:

The attack triggered an international outpouring of solidarity, with demonstrations spreading from Moscow to Washington, as world leaders and other media including newspaper cartoonists united in their revulsion of the daylight assault.

More than 100 000 people took to the streets across France to express their outrage, many carrying banners reading: “I am Charlie” while the hashtag #JeSuisCharlie was trending worldwide.

President Francois Hollande called the massacre – thought to be the worst attack on French soil since 1961 – “an act of exceptional barbarity” and “undoubtedly a terrorist attack”.

In the hunt for the attackers, police published pictures of the wanted men in an urgent appeal for information as a manhunt stretched long into the night with a raid by elite anti-terror police in the northern city of Reims.

Third suspect hands himself over to police
An 18-year-old suspected of being an accomplice in the attack at the headquarters of the Charlie Hebdo magazine was taken into custody after surrendering to police in a small town in the same region as Reims.

A source close to the case said Hamyd Mourad surrendered after “seeing his name circulating on social media”.

But the masked, black-clad gunmen – who shouted “Allahu akbar” while killing some of France’s most outspoken journalists as well as two policemen – were still on the loose.

Arrest warrants had been issued for Cherif Kouachi (32) a known jihadist convicted in 2008 for involvement in a network sending fighters to Iraq, and his 34-year-old brother Said. Both were born in Paris.

Search-and-seizure operations took place in Strasbourg and towns near Paris, while in Reims police commandos carried out a raid on a building later scoured by white-clad forensic police.

Day of mourning
Flags were to fly at half-mast Thursday as Hollande declared a day of national mourning – only the fifth of the past 50 years.

“Nothing can divide us, nothing should separate us. Freedom will always be stronger than barbarity,” said the president.

The attack saw the gunmen storm the offices of Charlie Hebdo in broad daylight as journalists gathered for a morning editorial conference, killing eight journalists, including some of France’s best-known cartoonists.

Charlie Hebdo has long provoked controversy, mocking many religions with provocative drawings, a practice that has outraged Muslims whose religion forbids depictions of the Prophet Mohammed.

Even before the attack France was on high alert like many European capitals that have seen citizens leave to fight alongside the radical Islamic State group in Iraq and Syria.

The group has singled out France, which is home to Europe’s largest Muslim population, when calling for terrorist attacks against Western nations.

Hollande called for “national unity”, adding that “several terrorist attacks had been foiled in recent weeks”.

US President Barack Obama led the global condemnation of what he called a “cowardly, evil” assault. Pope Francis described it as a “horrible attack” saying such violence, “whatever the motivation, is abominable, it is never justified”.

Security experts said the calculated and deadly efficacy of the killers showed they were highly-trained.

Chilling amateur video footage showed the attackers calmly walking towards a wounded policeman as he lay on the pavement before one shot him at close range.

Warning: This video clip of the terror attack on Charlie Hebdo headquarters may disturb sensitive viewers.

Prosecutors said 11 people were also wounded in the attack, with four in critical condition.

The imam of Drancy mosque in the northern suburbs of Paris, Hassen Chalghoumi, visited the scene, calling the shooters “barbarians”.

“They want terror, they want fear. We must not give in. I hope the French will come out in solidarity and not against the Muslim minority in Europe.”

One witness said: “I saw them leaving and shooting. They were wearing masks. These guys were serious.

“At first I thought it was special forces chasing drug traffickers or something,” said the man, who declined to give his name.

“It’s awful, it’s awful,” said Anne Pajon, a Scot who has lived in Paris for 20 years, as she waited at the busy Saint Lazare train station.

“It’s scary. What’s worrying is that we can’t do anything. That’s terrorism – it hits whatever we do. We cannot prevent it.”

‘We have avenged the prophet’
Charlie Hebdo gained notoriety in February 2006 when it reprinted cartoons of the Prophet that had originally appeared in Danish daily Jyllands-Posten.

Its offices were fire-bombed in November 2011 when it published a cartoon of Mohammed under the title “Sharia Hebdo”.

Even being dragged to court under anti-racism laws did not stop the publication, which in September 2012 again drew the Prophet, this time naked.

The killers on Wednesday shouted “we have avenged the prophet, we have killed Charlie Hebdo”, according to prosecutors.

The attack took place on the day the latest edition of Charlie Hebdo was published.

It featured a cartoon of an armed militant noting “Still no attacks in France. Wait! We have until the end of January to send greetings”. That was a reference to France’s tradition of wishing someone a Happy New Year before January 31.

Editor-in-chief Stephane Charbonnier, known as Charb and who had lived under police protection after receiving death threats, was among those killed.

British Prime Minister David Cameron called the attack “sickening” while Russian President Vladimir Putin as well as the Arab League were also among those condemning the violence.

Iran condemned the killings but reiterated its criticism of the weekly’s 2006 publication of cartoons of Mohammed. – AFP