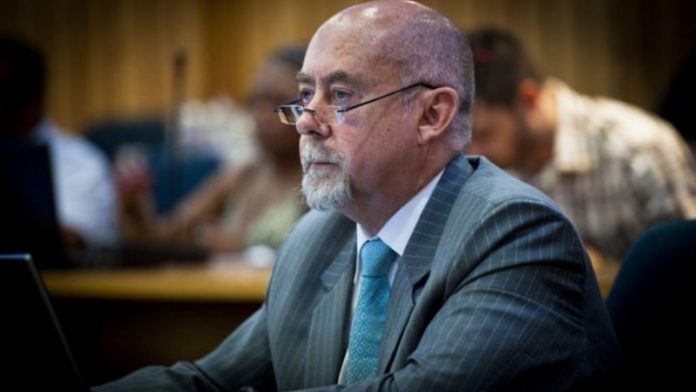 Judgement was reserved on Thursday in the Johannesburg high court where Judge Bert Bam heard the application by the legal team of the former head the apartheid government’s chemical warfare programme, Wouter Basson.

Basson’s lawyers filed an urgent application with the court on Monday, effectively halting the cardiologist’s sentencing hearings at the Health Professions Council of South Africa (HPCSA).

In December 2013, Basson was found guilty of unprofessional conduct by the HPCSA for acting unethically as a medical doctor during his time as the head of “Project Coast” and later “Delta G” in the 1980s. The activities that led to him being found guilty include the mass production of mandrax, ecstasy and the weaponising of teargas.

In his high court application Basson’s lawyer, Jaap Cilliers, filed an order seeking to compel two members of the ethical conduct committee – chair Jannie Hugo and member Eddie Mhlanga – to provide information “relating to their membership to any of the organisations that signed the petition agitating for the removal of Basson from the roll of medical practitioners”. The application calls for the recusal of Hugo and Mhlanga.

The petition was submitted to the committee in November.

Cilliers said he had learned that the committee chairperson was a member of one of the organisations – the South African Medical Association – that had signed the petition.

‘A bid to delay sentencing’
In court Cilliers argued that withholding of the information denied his client the right to a fair hearing. He said he was forced by the committee to bring the matter to court.

“If we didn’t come to court on Monday, Dr Basson wouldn’t have been a doctor by now. The applicant would have been removed from the roll,” Cilliers said.

“The ludicrous conducted is shown by the fact that they [the committee] made an order that we may not in future cross-examine that witness [who testified on Monday]. In fact they were on the verge of closing the applicant’s [Basson] case.”

Cilliers further wants Hugo and Mhlanga to pay for the legal costs of this application.

“It may be a difficult situation but they [Hugo and Mhlanga] are the sole cause for this absurd conduct and they should bear the responsibility.”

However, Terry Motau, the HPCSA’s legal representative, said Cilliers had ample time to raise his concerns with the council and the committee, and that the court application was a bid to delay the sentencing hearings.