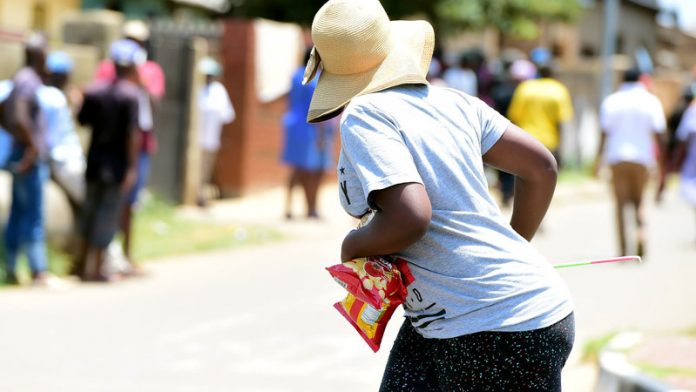 One person was shot dead and a foreign-owned shop was burnt down in Soweto on Wednesday night, Gauteng police said on Thursday.

This brings the death toll to two from violence that broke out in Snake Park, Dobsonville on Monday involving locals and foreigners.

“There was a Naledi community member who was shot and killed. It’s not clear who shot at him … but it was during the process of last night’s violence,” said Lieutenant Kay Makhubela. A murder case had been opened.

In Mabata, a foreign-owned shop was burnt down.

The death of the teenager on Monday happened apparently when a mob tried to rob a foreign-owned shop.

He died from a gunshot wound to the neck. He was identified as Mthetheleli Siphiwe Mahori.

The foreigner said he fired a warning shot after his shop was surrounded by a group of people, who also tried to break through his roof.

The group was apparently angry because he took out a gun earlier in the day when they attempted to rob him. His assailants then told other community members that the foreigner had a gun, after which a group of people decided to go and confront him.

The shooting of the teenager sparked protests and forced some foreign shop owners to flee the area.

Although the area was calm on Thursday morning, the provincial police commissioner had called on police from across Gauteng to assist in the area.

Arrests
Twenty-nine people were arrested in Soweto over night for looting and public violence, Makhubela said.

“Last night, we arrested 29 suspects, which brings the total number of arrested suspects in Soweto since Monday to 68.”

Of those arrested, eight were foreign shop owners in possession of unlicensed firearms.

“The rest were for the public violence, looting, and possession of stolen property.”

Three Somali nationals were arrested in Bram Fischer Phase two on Wednesday afternoon for being in possession of three unlicensed firearms, Makhubela said.

“They were shooting at the community as the community was attacking them and looting their shops and demanding they leave the area,” he said. The trio was also found in possession of fake South African identity documents.

During the week, the looting had spread to Mapetla, Dobsonville, Emdeni, Zola and Protea Glen.

The provincial commissioner was expected to hold a press briefing at 11.30am in Parktown, Johannesburg.

Foreigners appeal for help
The foreign nationals want the South African government to help them following attacks and looting of their shops in Soweto, they said on Thursday.

“The government must help us. We have been attacked and left with nothing,” said Temesgon Worku, from Ethiopia. “Our brothers have no food or clothes. If the government does not want us they must tell us. We will go to countries that will accept us.”

He said locals had robbed them and chased them out of the area.

“They called us makwerekwere and said we must leave. We do not feel safe anymore,” he said. Makwerekwere is slang for foreigner.

Worku said two of his relatives were arrested while trying to defend themselves. “They had a panga and their attackers were armed with guns. The police arrested them and left the armed attackers.”

A local resident, Paul Mogale, said foreigners helped pensioners by giving them groceries on credit. “They provide a service for pensioners, but for young people they ruin their lives by selling them drugs,” he claimed.

Mogale claimed he had seen boys as young as 14 buying drugs from foreigners. “The boys are regulars at their shop.”

Some of the arrested would appear in the Protea Magistrate’s Court on Thursday. At the court, foreign nationals stood in groups under trees in the court yard. Locals filled the two court rooms where the cases were being heard.

Attacks ‘not xenophobic’
Gauteng’s community safety MEC said on Thursday that the violence and looting against foreign shop owners in Soweto was not xenophobic.

“The actions are pure criminality … For now we won’t declare it xenophobic attacks,” Sizakele Nkosi-Malobane told reporters in Johannesburg.

Nkosi-Malobane said the attacks were sporadic and being carried out by a group of young people who moved from area to area.

An operations centre had been established to co-ordinate police operations in the area.

Police were working with community policing forums and other government leaders to calm the situation. – Sapa, Staff reporter