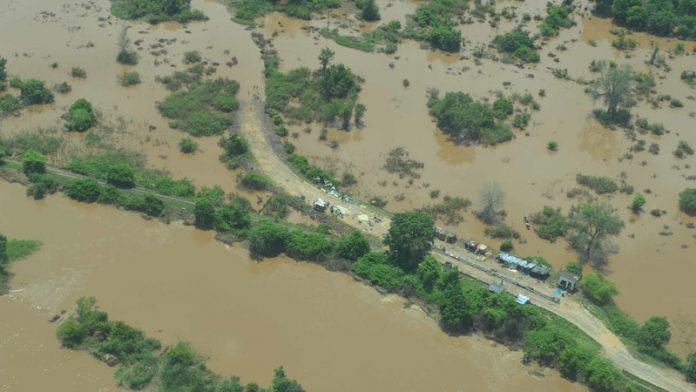 The government of impoverished Malawi has said it will need more than $65-million (R750-million) to reach out to more than 121 000 people made homeless and cut off by flooding, the worst in 24 years.

Malawi is the worst affected of the three southeast African countries hit by heavy rainstorms, which started two weeks ago. Mozambique and Madagascar have also reported damage and deaths from floods.

Large areas in the south of the country are under water, and homes, crops and livestock have been washed away. President Peter Mutharika has declared 15 of the 28 national districts disaster zones.

“After surveying the flooded districts from the air, we know that the scale of flooding is immense, and with the rains still falling the water is unlikely to recede quickly,” said Mahimbo Mdoe, the United Nations Children’s Fund (Unicef) representative in Malawi.

“It has shocked all of us – [from] government to donors, the people,” Robert Kisyula, the national director of the international nongovernmental organisation World Vision Malawi, told Al Jazeera earlier this week.

“People hung on to trees, waiting for the waters to subside, as they usually do, but water kept on coming and they were washed away.”

Region’s first deadliest natural disaster for 2015
Sixty-two Malawians are known to have died and 153 are missing, according to the government’s situation report on Wednesday. The Malawi Defence Force has reportedly rescued at least 4 000 people, but there are fears that many more need help.

The flooding across the region could turn out to be one of 2015’s deadliest natural disasters. Seventy-one deaths were reported in Mozambique, which shares a river system with Malawi.

When the weather system moved over the Mozambique Channel, becoming tropical storm Chedza, 13 people died in torrential rains and flooding in Madagascar. A total of 260000 people in the region are thought to have lost their homes.

It is estimated that the current disaster will be 10 times as expensive for Malawi as the March 1991 flooding, at that stage the country’s costliest weather-related disaster. A total of 472 people died and damage was estimated at $24-million at the time.

Malawi is ranked as the world’s eighth-poorest nation in terms of gross domestic product.

SA to send more helicopters
At a media conference in Lilongwe, Vice-President Saulos Chilima said the priority was to reach hundreds of people cut off by the floods, who needed to be rescued by boat or helicopter. The government is waiting for more helicopters from South Africa.

“The focus is now on the provision of food, tents, blankets, potable water, medicine and other needs,” Chilima said.

The longer-term damage to Malawi’s largely agricultural economy has been immense. According to Malawi’s department of surveys, more than 63000 hectares have been submerged by floodwaters and about 120 000 farmers have been affected, which amounts to 40000 hectares of cropland.

“This represents an expected food production loss of over 48 000 metric tonnes,” the report says. It says 221 schools have been hit by the floods.

Efforts are being made to establish temporary learning facilities for 154700 pupils and to provide them with food and clean water and sanitation services to prevent cholera outbreaks.

Aid either provided or pledged is falling far short of what is required. The government has so far released $1.3-million and private companies and individuals have contributed $132 000.

More aid required
The United States Agency for International Development pledged to pay $2-million to the disaster response plan and $50000 to water, sanitation and hygiene programmes.

Other donors include the United Kingdom’s department for international development, which has raised $1.5-million, the European Union, which has offered $600000, and the Japanese government, which will give $2.5-million to the disaster response plan through the World Food Programme.

The British contribution is drawn partly from its $5.7-million fund for disasters in Malawi, through the UN, which supports large-scale food and financial assistance for vulnerable people in the country during the lean season.

A Unicef situation report also said the agency is stepping up its relief efforts, airlifting an initial 90 tonnes of supplies. The report said some people are still marooned in areas surrounded by water, waiting for air or water rescue by the defence force.

The African Development Bank, Irish Aid and the German government have also pledged support and are awaiting the finalised disaster response plan.

Malawi denies it was not prepared
There is speculation that Mozam­bique’s 2014 flood plan provided better preparation for disaster than Malawi’s, which appeared to have been caught off-guard.

Forty-nine of the Mozambican victims of flooding died in the central Zambezia province, where the Lucungo River burst its banks, said Rita Almeida, of Mozambique’s National Disaster Management Institute.

The north of the country has also been hit hard. Sapa reports that nearly 30?000 people have been rescued and placed in 34 temporary camps.

Paul Chiunguzeni, the head of Malawi’s department of disaster and relief, denied that the country was ill-prepared, saying that it “had mixed success with the relief efforts because, in the early days of the disaster, rescue efforts were hampered by bad weather”.

He told Al Jazeera that his country “did not have the resources” to handle the aftermath of the massive floods. Malawi is already in dire financial straits after aid donors withdrew 40% of their funding in 2013 because of a corruption scandal.