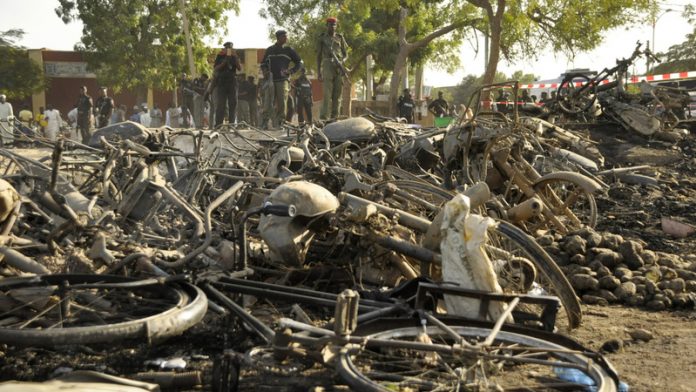 At around 9am (0800 GMT) on Sunday, a Reuters witness said shelling could be heard and that military helicopters were circling the city.

All roads have been closed, a security source said, and commercial activity has been shut down.

The militants began the attack at the edge of the city in the Njimtilo area. The city is the capital of Borno state and would be a major prize for the insurgents who are trying to carve out an Islamic state.

Boko Haram has waged a five-year insurgency to carve out an Islamic state in the north-east of Africa’s biggest economy. The militants control vast swathes of Borno state and some areas of neighbouring Adamawa and Yobe states. They recently took control of the town and army base at Baga by Lake Chad.

Headache for President Jonathan
The army’s inability to squash the group has become a major headache for President Goodluck Jonathan, who is seeking re-election in February. Jonathan visited the state capital on Saturday as part of his campaign and opposition candidate Muhammadu Buhari was due to arrive Monday.

The insurgents last attempted to take Maiduguri from the same area in December 2013 and attacked a nearby army and airforce base.

A resident, Rachel Adamu, who lives around Njimtilo said “please pray for us, we are in danger, under serious attack now.” – Reuters