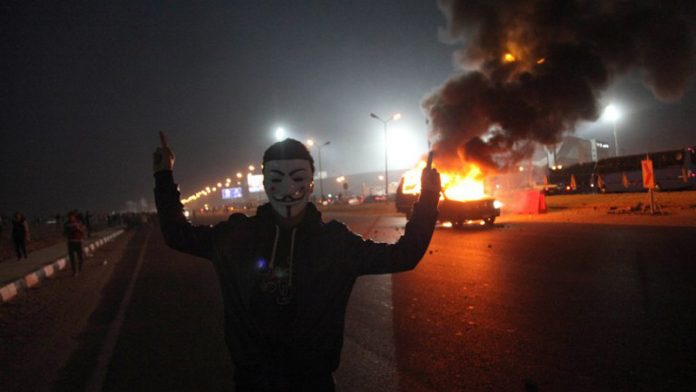 At least 22 people died as thousands of fans tried to force their way into a Cairo football stadium on Sunday to watch a game, triggering panic as police fired tear gas and birdshot at the crowds.

Witnesses and medical reports suggested many of the victims were crushed in a stampede, with some suffering broken necks. At least 25 other people were injured, the health ministry said. The match continued despite the violence, provoking further outrage among the fans.

The clashes prompted the government to postpone the Egyptian Premier League indefinitely, the prime minister’s office said in a statement.

The match between Zamalek and Enbi had been open to the public, unlike most other games between Egyptian clubs since stadium riots in Port Said in 2012 left more than 70 people dead in the country’s worst ever sport disaster.

The interior ministry had restricted to 10 000 the number of spectators allowed into the stadium, and tickets quickly ran out. Thousands of fans without tickets scaled the stadium walls before police dispersed them, according to the ministry.

‘Trampling over one another’
Zamalek supporters aimed fireworks at the police, who fired tear gas and birdshot back, police and witnesses said. “There was a police car on fire and they were shooting birdshot and tear gas,” said a witness. Witness Mostafa Ibrahim said: “Police fired tear gas at a large number of fans in a very narrow place. People were trampling over one another trying to escape.”

After a preliminary exam, 19 of the dead were found to have no gunshot wounds, according to a health ministry official. Injuries were consistent with being crushed in a stampede, and some of the dead had broken necks. An AFP correspondent outside the morgue saw coroner reports handed out saying two of those killed died of “extreme pressure to the chest”. Many of those injured suffered broken bones and bruising, the health ministry said according to state news agency MENA.

Zamalek defence player Omar Gaber has been suspended for refusing to play in the match in protest at the violence, a statement from his club said.

League postponed
The government accused the football fans of starting the clashes with police, leading to the deaths. “Because of these sad events it has been decided to postpone the league to a time that will be decided later,” it said in a statement.

Outside a Cairo morgue where the bodies were taken, dozens of relatives wept and wailed while others pored over a list of the dead, trying to identify loved ones. “The youths are supposed to be building this country and the police are killing them,” one man shouted. Others scuffled with morgue security men who were blocking their access. Morgue officials later placed a computer outside showing pictures of the dead men for relatives to identify.

The state prosecutor ordered an investigation into the clashes, a statement from his office said. It said the fans had blocked a road leading to the stadium and torched three police vehicles.

Military regime
Sunday’s deaths could inflame football fans, who have repeatedly clashed with police over the past few years and can mobilise thousands of youths. After the deadly 2012 football riots in Port Said following a game between Cairo’s Al-Ahly and Al-Masry, a court handed out death sentences to 21 people before an appeals court ordered a retrial that is yet to conclude.

The riots took place under a military regime that had taken charge after a popular uprising, in which football fans played a key role, ousted veteran strongman Hosni Mubarak. The fans have continued to be a volatile force in the troubled country. Hundreds of Cairo Al-Ahly fans confronted police in deadly clashes in the capital following the Port Said riots. – AFP