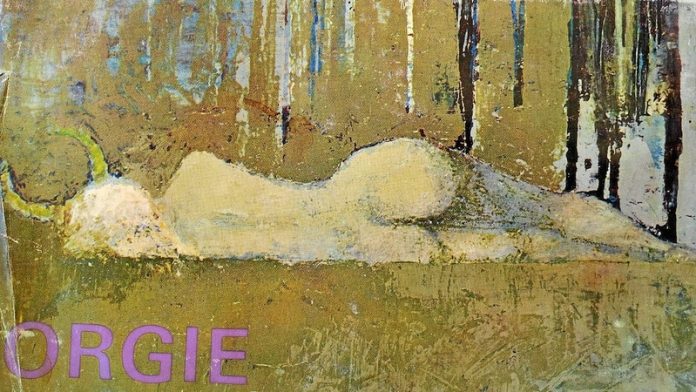 On Tuesday afternoons we boarders were allowed to go to town. Mid-Seventies Balfour in the then Eastern Transvaal was your typical repressive apartheid-era dorp, but it had a surprisingly well-stocked library.

Orgie made even more sense when he spoke about the impact Albert Camus’s absurdist philosophy had on him when he went to study at the Sorbonne in the late 1950s. “I developed a real deep interest in him and then suddenly soon after I arrived in Paris he died in that terrible absurd way in a car crash, and that made the impact of what he wrote so much greater for me,” Brink told me.

“He was living absurdly and he demonstrated through his death what the absurd really meant – and with the absurd came everything that had to do with existentialism and so on. So that conditioned me for a very long time – I’m still probably not free from that.” Brink chuckled. “I’m still rather glad about that. I think it gave me some kind of padkos that could last me for the rest of my life.”

And of course there was the sex in Orgie – what was there not to love for this teenage boy? This was something Brink was obviously aware of when I asked him why he thought he was such a massive figure for many people of my generation. “One must be realistic and say the sex had something to do with it, certainly for the younger generation,” he said with a smile.

“And  to feel in Afrikaans, for the age group in which they were then, that seemed like something rather unusual, that must have helped to draw them in.

“For me the most important part is that such people aren’t just drawn in and then left cold by what comes after. A certain number, surely not all of them, but a certain number of them stayed loyal to all that I wrote after that and that has been most deeply gratifying.”

Although Orgie and other books from Brink and his fellow Sestigers (a group of anti-establishment Afrikaans writers from the 1960s) opened my mind to possibilities, it was ’n Droë Wit Seisoen (A Dry White Season) that opened my eyes to the sick horror perpetrated by the apartheid regime in my ethnic group’s collective name.

While it was a fictional account about a black man’s death in detention, Brink told me that when it was published his father wanted to sit down and discuss it with him. “And he was particularly, as a magistrate, interested in the workings of the security police. He asked me: ‘Just tell me what you wrote about the security police, was it true or did you make it up?’

“So I could honestly say, I changed it into a fictitious story, but that every single episode, and specifically [those] involving the police, was based on something that actually happened to somebody …” As a young man, Brink’s gripping novel, with its very close engagement of what was happening in 1980s South Africa, gave me an insight into the “workings of this whole odious system”, as he called it.

Like other Afrikaners, I had no excuse anymore to say I didn’t know. Brink was not only the chronicler of our times. He also used the pen as a middle finger to the dour apartheid establishment. Furthermore, he wore his hair long and a polo-neck like the French intellectuals. He was cool, handsome and sexy. He was clever and rebellious. Brink was our role model.

He showed us what could be. And for that we will remain grateful.

Charles Leonard
Charles Leonard is a journalist, editor, broadcaster, DJ and record collector. For more than 30 years, he has edited and written for a variety of South African publications and broadcasters, including the Mail & Guardian, Business Day, SABC, Vrye Weekblad and the Sunday Times, as well as Channel Four News in the UK.
Facebook
Twitter
WhatsApp
Linkedin
Email
Telegram