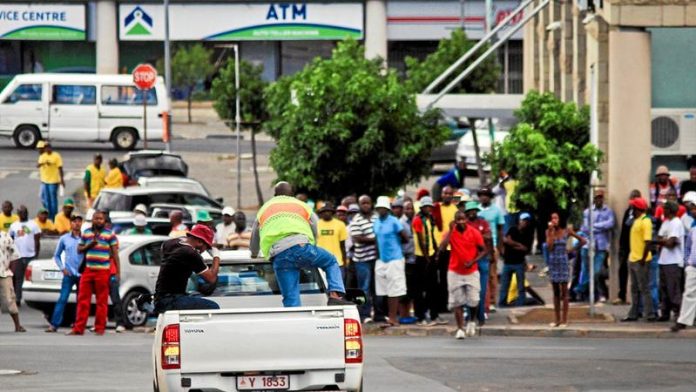 It’s a season of denials in Lesotho. On a Sunday afternoon on February 1, the calm in the capital Maseru was shattered by the crackle of gunfire in the street just outside the gate of King Letsie III’s royal palace.

Two of Prime Minister Tom Thabane’s bodyguards, travelling alone, were shot and wounded. An unknown number of Lesotho Defence Force (LDF) soldiers were also shot and wounded. A private security guard, drawn by the din, was killed in the crossfire.

The government says troops fired first. The LDF deny this, saying Thabane’s men (soldiers themselves) fired first – at a checkpoint the LDF set up to protect the Maseru headquarters of the Southern African Development Community (SADC), here to “restore peace and security” after last August’s coup attempt in which soldiers raided Thabane’s official residence and the national police headquarters, killing one police officer and injuring nine.

But SADC says it did not invite LDF protection that day. Days later, Lesotho’s government says four LDF soldiers were arrested in South Africa on their way to “finish the job” – of killing Thabane’s two bodyguards as they recovered in a Bloemfontein hospital.

The South African Police Service denies this: “No one has been arrested.”

“When we hear about soldiers shooting at each other, people dying, conflicting statements about why exactly soldiers were there, it causes confusion and fear for ordinary Basotho,” says Sofonea Shale, co-ordinator of Development for Peace Education, a leading voice of civil society.  “When a security guard is caught in the crossfire, don’t think violence is too far from you. Tomorrow, that could be you.”

A prominent Basotho businesswoman echoes the sentiment. “We no longer know who’s responsible for what in our country,” says Ntsepeng Tsita Tikiso. “If we cry out for help, we don’t know who will respond – or if anyone will help us.”

Indeed, this latest eruption of violence is a stark reminder for the Basotho and the international community that the election is a matter of life and death.

The shoot-out – in broad daylight – also punctured a hole in SADC facilitation efforts, led by of South Africa’s Deputy President Cyril Ramaphosa.  For SADC, Lesotho is the latest test of the 15-nation bloc’s conflict-resolution abilities. South African special forces continue to protect Thabane and a handful of anxious leaders.

Just three days before the shootout, Ramaphosa delivered his Lesotho “progress report” to a SADC summit in Ethiopia, painting a rosy picture of the situation on the ground.

Yet the lustre of self-congratulation didn’t last the weekend. In fact, the shootout has spurred louder criticism of SADC’s focus on a political quick fix, while superficially addressing those wielding weapons.

To their credit, Ramaphosa and SADC had convinced Basotho lawmakers to reopen their Parliament in October – four months after Thabane suspended it to dodge a motion of no confidence – and to agree on early snap elections.

‘SADC put the nation’s security at risk’
But critics say little has been done to improve relations between the army and police, whose rank and file are highly politicised and trigger happy. “The SADC has basically put the nation’s security at risk by not resolving the security situation: military to military, military to police, divisions within the police, as well,” one international official in Maseru told the Mail & Guardian.

“This also puts Lesotho at risk of not having peaceful elections because once the results are announced, those who reject them could respond with violence – as they have in the past.”

Ramaphosa’s spokesman, Ronnie Mamoepa, rejects such criticism: “President Zuma has expressed confidence in the facilitation work of the SADC.  The process has been fully consultative with successful agreements that have already led ?to Parliament being reopened, among other issues.”

On the potential for postelection violence, Mamoepa said: “The facilitation team is not aware of this possibility.”

On Sunday Zuma downplayed the shoot-out that killed a man, describing it to journalists as “some little shootings here and there”. On Monday, after he met Thabane and his coalition partners in Pretoria, Zuma’s office reiterated that the poll “remains on course”.

Meanwhile, none of this political violence is new to the Basotho. During its half-century of independence, Lesotho has now endured six putsches, several assassinations, alleged torture of political opponents and election-related violence. Most notoriously in 1998, when South African troops under the SADC umbrella further inflamed an already delicate situation, more than 50 Basotho were reportedly killed and the South African Defence Force suffered eight fatalities.

“Political violence has become part of Lesotho’s political culture, especially because of rampant impunity in dealing with such violence,” says Dimpho Motsamai, a Southern Africa analyst at the Institute for Security Studies in Pretoria.

This helps to explain what made the 2012 election so triumphant: then-prime minister Pakalitha Mosisili, who ruled for 14 years, peacefully handed over power to the new Thabane-led coalition – turning Lesotho into a democratic success.

Thabane’s anti-corruption crusade
Yet when Thabane became the country’s first premier to crusade against corruption – which opponents brand as a vengeful witch-hunt against his political rivals – the reaction once again opted for violence.

In January last year, grenades were thrown at the homes of Thabane’s girlfriend and police chief Ts’ooana, whose agency leads the corruption investigations.

Thabane’s circles wouldn’t back down, instead pushing Kamoli to hand eight soldiers over for questioning – several of whom they alleged were bodyguards for Deputy Prime Minister Mothetjoa Metsing, who by then was also accused of serious corruption. Kamoli refused. On August 29 Thabane fired him for insubordination.

Early the next morning, Kamoli reportedly led the raid on Thabane’s residence and police stations. Thabane, purportedly tipped ?off by his bodyguards – the same two shot on February 1 – escaped into South Africa.

Pretoria said the LDF’s actions bore “the hallmarks of a coup d’état”. The United States Embassy in Maseru also called on the LDF to “respect civilian authority”.

The SADC stepped in to mediate, but has been accused of downplaying the putsch and not taking on the LDF.

“The SADC mediation has been biased towards a negotiated political solution, with clear deferral of the security issue to the incoming administration,” says Motsamai.

“They haven’t even labelled what happened on August 30 as a security crisis because then you have to address the causes of that security crisis. Instead, they’ve focused on areas with greater likelihood of success, rather than resolving an insecurity issue that is structural and long-standing.”

Adds Shale: “In the science of conflict resolution, we call this conflict escalation. If you don’t deal with the serious problems at an early stage, it progresses to the next level.

“In Lesotho, under the SADC facilitation, without the proper reforms, we may be heading towards a disaster.”