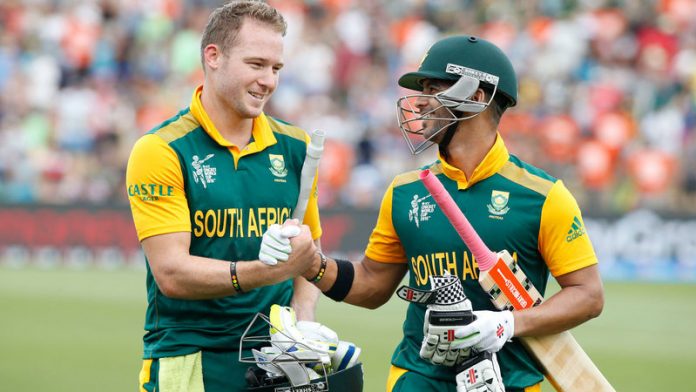 South African one-day captain AB de Villiers has praised the character and fight of the Proteas’ middle order in getting his team over the line in their opening ICC Cricket World Cup match against Zimbabwe at Seddon Park in Hamilton, New Zealand, on Sunday.

The record unbeaten 256-run fifth wicket partnership between David Miller (138 not out) and JP Duminy (115 not out) laid the foundation for the Proteas’ opening victory of the tournament, and was a timely confidence boost for the middle order after a rare top-order failure. “It was very pleasing to sit on the side and watch that,” De Villiers said after the match.

“We were talking about 240 to 250 at one stage, and ended up getting 339. I don’t know how we did it but it was an incredible performance by the two of them.

“David got a sniff in the 40th over, and went to it from there. We’ve seen him demolish attacks before and that’s what he’s capable of. To see that at the highest level in the biggest tournament you can get is great. It shows you where this guy’s (Miller) going with his cricket career. To get JP also in good form, he’s been a little bit out of touch with injuries, to see him bat like that is very pleasing.”

De Villiers was equally impressed with the tenacity shown by Zimbabwe, and tipped them to upset a big nation further on in the tournament. “I’m very happy with the performance,” De Villiers said of his team.

“You’ve got to give credit to the Zimbabwe players, they played a really good game today. No doubt that the wicket played a big part in them getting ahead early on, it was a really difficult wicket to battle on in the first 20 overs.

“The wicket got a little easier in our innings and David and JP made full use of that, they played exceptionally well with a great partnership that won us the game today.

“I’m very, very satisfied with our first win. These guys (Zimbabwe) can play some cricket. Like I said before, they beat Australia not long ago, and I won’t be surprised if they upset a couple of teams in this World Cup.”

The squad has been given two days off and will begin their preparations on Wednesday for their second match against India in Melbourne on Saturday. – Sapa

I now go to meetings barefoot and in my shorts. And it cuts what we pay for MPs to travel. We should keep it this way post-Covid
Read more
Advertising
Continue to the category
Africa