Was Mbeki pressured into watering down his Sona criticism? 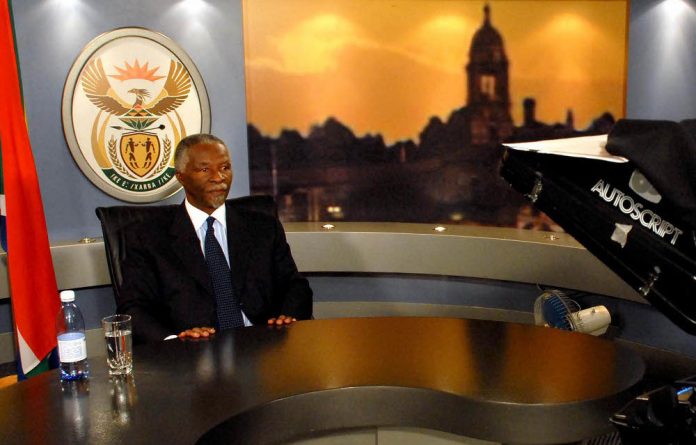 Thabo Mbeki is enjoying something of an amnesia-fuelled return to favour in South Africa. With his successor Jacob Zuma looking increasingly weak and compromised, South Africans and even the opposition DA are remembering Mbeki’s term in office with a healthy dollop of whitewashing.

Why do we feel such a desperate need to create heroes for ourselves as a nation?

Given the high rate of abandonment and single-parent homes in the country, perhaps we’re a nation with a collective absent-father issue. One patriarchal figure lets us down, say Mbeki towards the end of his second term, and we wildly rush into the arms of his then-deputy Zuma. The latter proves to be unworthy of our affection, and we turn, grief-stricken, to the former again. It’s a little pathetic.

No matter, it does mean the most damning aspects of Mbeki’s legacy is increasingly being forgotten: his stubborn and near criminal refusal to roll out antiretroviral drugs to HIV-affected South Africans resulting in the death of over 300 000 people according to  one conservative study by Harvard University. Yet I’ve had young EFF supporters attack me on Twitter and ask me to “prove” that Mbeki ever did anything wrong in this regard.

Mbeki himself certainly seems to be enjoying the new-found reverence after his ignominious forced exit from office.

He insisted in a response to an article I wrote last year that his administration fully supported the launch of the President’s Emergency Plan for Aids Relief (Pepfar), in 2003 by former US president George W Bush, which spent billions working around our government to get medication to those who needed it.

“Contrary to what Ms Pillay suggests, there was never any conflict or tension between the South African and US governments about the implementation in our country of the US President’s Emergency Plan for Aids Relief (Pepfar) programme,” wrote Mbeki, a statement that is almost startling in its wilful rewriting of history.

Mbeki also fails to mention that his administration finally rolled out treatment practically at gunpoint: they only introduced a national prevention of mother-to-child transmission programme after being forced to act by the Constitutional Court in 2002 and a national antiretroviral treatment programme in 2003 after increasing pressure from civil society and the rest of the world.

No matter: when Mbeki talks these days, we listen rapt. As if, as one young civil servant Esethu Hasane tweeted earlier this week, “Thabo Mbeki is godly”.

So when he spoke publicly for the first time after the devastating events at Parliament’s State of the Nation address on Thursday, we paid attention.

Mbeki addressed students at the University of South Africa on Friday, when the topic on everyone’s mind was the ejection of the EFF from Parliament for demanding Zuma answer when he will pay back part of the public money spent on his private residence in Nkandla as per the public protector’s recommendation. The DA and UDM also walked out, while the jamming of cellphone signals created another uproar.

Mbeki did not directly address the Nkandla issue but he made no bones about his view. In a long discussion, part of which can be heard here after 19 minutes Mbeki made a few things clear:

The Guardian‘s reporter David Smith reported the quotes under the headline: “Thabo Mbeki slams Jacob Zuma over brawl in South Africa parliament”, later tweeting: “I asked Mbeki if Zuma should have answered. He replied: ‘I think so. Don’t quote me but that was the easiest way to have dealt with it.’”

The ethics of Smith quoting Mbeki off the record against his wish aside, it was clear from the on the record comment that Mbeki disagreed with how the Sona situation had been handled.

Once the article appeared, South Africans of course latched on to the sentiments. Our new-found Mbeki-sycophancy combined with the nation’s collective horror at Thursday’s events made it a natural fit.

On Sunday, however, Mbeki released a scathing statement calling the article a “(mis)interpretation” of what was said and “a deliberate distortion”.

(The statement said a full transcript would be released on Monday but this had not yet landed at the time of writing.)

The Guardian headline was a bit strong for sure, but hardly factually incorrect. And if Mbeki had asked not to be quoted and was, that is an issue. But Mbeki’s sentiments at the time were clear from the recording, so why the sudden turn-around?

It is clear that Zuma’s administration is still reeling from Thursday’s events. From calling EFF leader Julius Malema a cockroach to denying against all proof that government authorised the jamming of signal, this is an administration in crisis, flailing about to redeem itself.

Could they have put pressure on Mbeki to water down his statements?

It’s not clear. But if so it would be disappointing. His comments were useful. But given Mbeki’s own history when it came to dissent we lose nothing by his backtracking. As professor Sipho Seepe said in an interview on SABC yesterday.

“If you look at the disaster he has caused… there are many people who are a victim of Mbeki’s rule. Even if he does have a point we shouldn’t take him too seriously. We have enough people in this country who will raise this issue and who have credibility.”