Sindiso Khumalo: ‘Buildings’ made of cloth 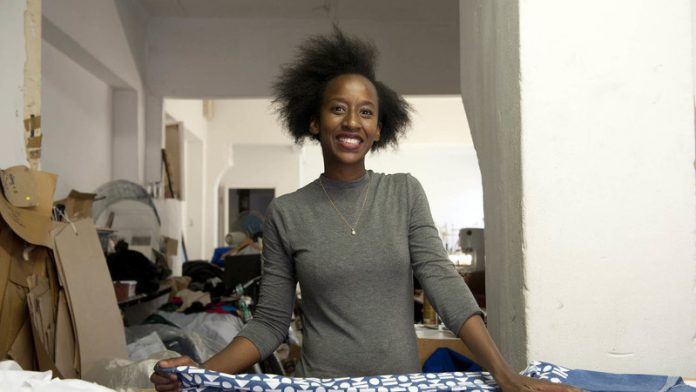 The narrative of textile designer Sindiso Khumalo, a South African Zulu woman raised in Durban but now living in London, mirrors the tapestry of her past and present work.

“I live [in] and come from two very different environments,” Khumalo says of her past collections and the reasons for their wintry and uniform Brutalist aesthetic yet rich, warm colours that evoke seaside scenes of bright rickshaws taking people along Durban’s shores.

“My work is a collision of two opposites – kind of like my life,” she says ahead of her presentation at this year’s Design Indaba Conference.

“My aesthetic is a mixture of African influences but also modernist architecture, which tends to be quite cold with all its concrete.”  It’s no coincidence we’re talking about architectural movements in the form of Brutalism, which became popular from the 1950s in countries such as the United Kingdom – a place she now calls home – or why she coined the term “Afro-Bauhaus-Gone-Pop” to describe the aesthetic for her past collections.

The textile designer studied architecture at the University of Cape Town, completed her master’s in textile design at Central Saint Martins College of Art and Design in London and then worked with renowned British-Ghanaian architect David Adjaye.

The architect approach
Despite moving into the fashion world when she got to London about 12 years ago, Khumalo says architecture is still very much a part of her language. “I still think in an architectural way. Before I start any collection, I first consider the material I’ll use and how I’ll treat it. The manner in which architects approach their work, like looking at materials and tectonics, is what I’m obsessed with – and my husband’s an architect [Edward McCann]. So I’m still very in that world.”

Since starting her eponymous label in 2012, Khumalo, who was a finalist in the South African Elle Rising Star Design awards, has garnered considerable acclaim. Her designs appeared on the pages of Britain’s Vogue magazine in 2014.

That same year she was invited to be a part of the Africa Utopia Festival at the Royal Festival Hall in London and the Smithsonian’s National Museum of African Art showcased her work as part of the Earth Matters, Fashion Matters fashion event.

As her garments, with their minimalist silhouettes and boldly coloured, geometric print designs take to international runways and high-fashion editorial spreads, Khumalo tells me how her “love for concrete in buildings” has been a constant theme in her work. Her latest collection, showing as part of her talk at the Design Indaba, is no exception.

“I’m taken by pre-1960s architecture and the use of concrete there. So I bring a lot of that in my work. For this collection, there’s a lot of bold graphics, which are also really muted down. Some of the prints are white on white, so you’d have to get really close to see it. Some of the prints look [as though] they are peeling off a building. They’ve been printed in a way that looks like a building that’s been worn down.”

Khumalo says her label will be expanding. “I’ve taken the plunge to not only do fashion. Expect to see textiles in many different forms.” Khumalo adds, without revealing too much: “That is the joy of the textile; it’s just everything really.”

Design Indaba Conference 2015 takes place from February 25 to 27 at the Cape Town International Convention Centre. Visit designindaba.com for more information on other events and festivals and mg.co.za/report/design-indaba-2015 for regular updates