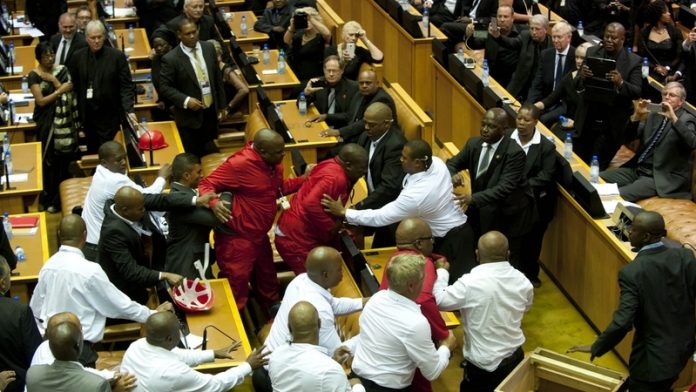 Going from sombre to funny to analytical – and even fitting in a history lesson in his 80 minute speech – President Jacob Zuma had MPs nodding, shaking their heads or clapping loudly as he delivered his reply to the State of the Nation Address debate.

The president even took time out to commend Economic Freedom Fighters (EFF) leader Julius Malema for making valid points during the debate – considering they had not been there, a dig at Malema and his MPs, referring to them being thrown out of Parliament before the State of the Nation Address.

Addressing Malema’s concerns on part-time workers and labour brokers, Zuma said his concerns have been resolved.

“In terms of the Basic Conditions of Employment Act and the Labour Relations Acts as amended, all workers will be employed permanently. Temporary work contracts will not exceed three months, as honourable [Edwin] Makue also pointed out. In addition honourable members, the deputy president [Cyril Ramaphosa] will continue to lead the Nedlac [National Economic Development and Labour Council] dialogue relating to a national minimum wage.”

In his debate to the State of the Nation Address on Tuesday, Malema said  workers in hotels, restaurants, mining and construction sectors and retail shops did not enjoy the Freedom Charter as only a few had permanent jobs.

“It does not affect those foreign nationals who are planning to buy homes or residences. We are taking these actions precisely because the fate of too many is in the hands of too few. We are keenly aware of the contribution of the country’s hard working farmers to the economy and food security. However, the effective participation of the previously excluded black majority in agriculture and food production will only occur meaningfully, when they have access to land and the means to work it.

“An inclusive and scientific process will be used to assess the situation in different commodities and in different localities, so as to make sure that nothing is done that will prejudice food security in the country.”

“Once fully functional, this will replace the six hundred or so supplier databases that currently exist. The system will offer a quick and more effective mechanism for verifying supplier information, such as their BEE status, tax certificates and the like. These are factors that currently give rise to negative audit outcomes for departments.

The economic cluster departments will work with the National Treasury further to explore practical and effective mechanisms of using state procurement to give practical expression to the National Development Plan and our socioeconomic objectives, including supporting SMMEs [small, medium and micro enterprises] and cooperatives.”

Buthelezi: ‘The voice of reason’
In the middle of his delivery, the president took time out to thank Inkatha Freedom Party leader Mangosuthu Buthelezi for always being the voice of reason when MPs are heckling each other.

“You sometimes resemble a father figure to us … It’s always good to have senior citizens around,” he said to Buthelezi, who took a bow from his seat.

Quality education a priority
Zuma said improving the quality of education and training remained a priority to government.

The process of identifying nine community education and training colleges for piloting in 2015 has been completed. This initiative will be implemented in collaboration with local authorities, Sector Education and Training Authorities, community organisations and business. This is in addition to the re-opening of teacher and nursing colleges.”

A history lesson on colonialism
He reassured Freedom Front Plus leader Pieter Mulder that no one was chasing Afrikaner compatriots away from the country. This after Mulder, in his response to the State of the Nation Address, expressed concern over Zuma’s 103rd ANC party celebrations speech, where he stated that the problems in the Western Cape started with the arrival of Jan van Riebeeck.

After delivering a history lesson on colonialism and the arrival of Jan van Riebeeck and the Eastern Cape wars – while pointing out it was in the history books – Zuma told Mulder that South Africa belonged to all who live in it.