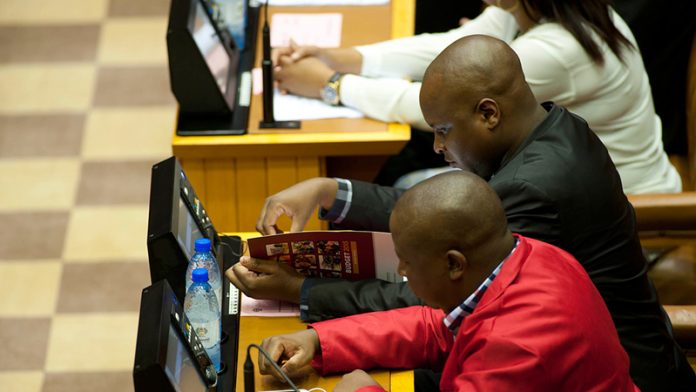 In his maiden budget speech, Finance Minister Nhlanhla Nene moved to appease a spectrum of stakeholders.

First, he was mindful of the ratings agencies: having in the past year weathered a sovereign credit rating downgrade to just above junk status by Standard and Poor’s, and a revision of South Africa’s outlook to “negative” by Fitch, the nation could little afford another ratings slippage. Nene was only too aware of this as he spoke of government cost-cutting and containment.

“Over the medium term, government will take several steps to strengthen budget controls,” said the budget review. “New treasury instructions will contain costs and additional controls on personnel budgets will be designed. These measures [will be] combined with hard budget restraints.”

The minister announced treasury’s intention to reduce the main budget expenditure ceiling by R25-billion over the next two years. Consolidated non-interest government expenditure this year is expected to be R1.123-trillion.

Power frustrations
Then Nene acknowledged the nation-wide frustrations caused by the ongoing electricity shortage. “Our primary challenge is to deal with the structural and competitiveness challenges that hold back production and investment in our economy,” he said. “The most important of these is the security and reliability of energy supply.”

Complementing the first of the nine strategic priorities outlined by President Jacob Zuma in his February 12 State of the Nation Address, the budget speaks of “resolving the energy challenge”.

The budget review outlines government’s intention to support power utility Eskom in its capacity challenges. “Medium-term support to help stabilise Eskom includes funding totalling R23-billion, to be raised in a manner that does not widen the deficit,” it said.

The ministerial electricity “war-room” is working to address short-term funding, speeding up the completion of Medupi and Kusile, and procuring an additional 33 000 MW of electricity from co-generational and independent power producers, amongst other things, it said.

Nene spoke to would-be investors when he reiterated that fiscal support to state-owned companies would be “financed through offsetting asset sales so that there is no net impact on the budget deficit.”

The actualities of this commitment remain to be seen. The minister said, speaking of Eskom’s financial needs, that “if further support is deemed necessary, consideration will be given to an equity conversion of government’s subordinated loan to Eskom.”

With the new system, suppliers will only be required to register once. The database will interface with the South African Revenue Service, the Companies and Intellectual Property Commission and the government payroll system. Each company registered on the system will be electronically checked for their tax and BEE status.

Along with this, the historically messy process of tender advertisements will be streamlined. A central e-tender portal will be implemented from April, said the minister. “It will be compulsory that all tenders be advertised on this portal, and all tender documents will be freely available there. Tender advertisements in newspapers and the government gazette will be phased out,” said the minister.

Education
And Nene spoke to parents too. Responding to the ongoing reality of inadequate schooling facilities and years-long controversies surrounding school textbook delivery, he announced that all books delivered to schools from January 2016 would be managed through a centrally negotiated contract.

From May this year, all school building plans will be standardised as well, with the cost of construction controlled by the Office of the Chief Procurement Officer.

“Too often, and for too long, we have paid too much for school building projects,” he said. Education continues to have the largest single share of the national budget, having increased by 8% from last year, with an allocation of R265.7-billion.

Crime
The concern of crime was also addressed. In light of the fact that “we still confront unacceptably high levels of crime in our country”, the minister outlined that spending on public order and safety would continue to increase, from R163-billion this year to R193-billion by 2017/18. Police services will receive almost half (48%) of the allocation.

And lastly, the new minister addressed the nation’s urgent need to save. With low savings levels and high costs associated with pensions and retirement annuities, the Minister confirmed that new tax free savings accounts would be made accessible from March this year.

This savings vehicle, which allows one to save up to R30 000 per year tax free, represents progress made to wide-sweeping retirement reforms taking place in the country.

Fiscal slippage
But Nene’s charm offensive comes against the backdrop of an urgent need to implement structural changes to “rebalance” the fiscus. Despite his talk of cost-cutting, government debt remains at 42.5% of the gross domestic product, and is projected to “stabilise” at 43.7% in 2017/18.

A recent OECD report recommends that developing economies such as South Africa keep their debt ratio no higher than 40%.

And the public sector wage bill remains extravagant. According to the minister, “the share of personnel compensation is projected to remain about 40% of non-interest spending.”

According to Goolam Ballim, chief economist at Standard Bank, this translates to about 12% of GDP. In Ballim’s words, this is “extraordinarily high by peer comparison; nations such as Chile, Mexico, Malaysia and Indonesia spend less than half South Africa’s level, and even Brazil (10% of GDP) and Turkey (8%) are lower.”

And the state continues to shoulder hefty bills to cover the costs of its debt. Interest on state debt will rise from R115-billion this year to R153-billion in 2017/18, and continues to be the biggest line item in the government’s expenditure.

Overall, the minister finds himself in a delicate situation that will rely on the undeviating execution of his plans to allow for the fulfilment of his promises.