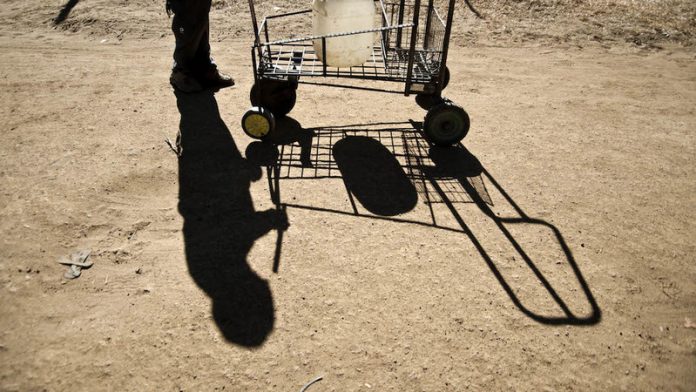 Finance Minister Nhlanhla Nene used the word “water” five times in his budget speech. Two of the references were to the successes and failures in provision. Two talked about small projects. Only one mentioned big spending – R68-billion on bulk water infrastructure over the next two years.

Dr Anthony Turton, of the University of the Free State’s Centre for Environmental management, said the budget gave “no sense” of the country having a water crisis. The scale of money committed to fixing crumbling infrastructure and building new water schemes was “nowhere what we need if we are to tackle a crisis of this scale”, he said.

That there is a crisis is common cause, he said. A third of households do not have functional water systems and, by 2030, the demand for water will exceed supply by 17%.

But instead of boldly tackling the problem and saying money must be spent, Turton said, the budget was just putting “plasters” on the problem.

Nene’s one mention of water was about the “over R80-billion allocated to over 220 water and sanitation projects”. The bulk of this would be for water infrastructure, funded through the treasury.

De Hoop Dam
These have dragged over several budget allocations, with money not being spent rolled into the next financial year. This happened with the newly opened De Hoop Dam in Limpopo, which finished five years behind schedule and R2-billion over budget.

But the true amount spent on water is obfuscated by the fractured nature of water provision. The department of water affairs’ budget will grow from R13-billion to R18-billion by 2017, with R15-billion of this going into water infrastructure development each year.

This covers certain projects, but other departments also fund water projects in their realms of responsibility. Although the water department builds the big schemes and shifts water around the country, it is up to municipalities to take it to people. Nene said R9-billion would be spent on giving interim services to 226 000 households and refurbishing their water treatment works, which he said “are no longer working”.

A third of water lost
Research by the Water Research Commission last year found that a third of all this water was lost, but still had to be paid for. This cost R9-billion a year in lost revenue, it said. To fix problems such as this, the treasury has increased the conditional grant to municipalities for water and sanitation from R990-million to R2.4-billion in the 2017 financial year.

This, along with funds that come through the department of co-operative governance and its municipal infrastructure grant, are what keeps water flowing around towns and cities.

To get the water to the municipalities, the water affairs department started the Trans-Caledon Tunnel Authority and Water Trading Entity in the 1980s. These report to the department, but are financially separate and make their money from selling bulk water to mines and local government. Thanks to their separation, they are also able to raise loans for big projects at favourable rates.

Together they raised R12-billion selling water last year, which was used for a variety of infrastructure schemes – the tunnel authority is responsible for building and running the acid mine treatment plants in Gauteng. This had been allocated R430-million by the treasury in the 2013 budget.

But even with the different funding vehicles, not enough money was being committed to water, said Christine Colvin, head of the Freshwater Programme at the World Wide Fund for Nature.

“The numbers in the budget do not appear to approach what the ministers have said is needed.” This meant the department would always be retrospectively responding to breakages in water provision, rather than having enough money to supply enough water.

If money was an issue, Colvin said the obvious solution was in the much cheaper ecosystem management. Areas where water was sourced, such as wetlands, should be protected so that they could do the job that water systems did, but for free, she said.

“The National Development Plan is clear in an integrated approach to energy, water and agriculture. But the budget shows that this has been lost and, instead, we are going the way of big builds, just without the ambition to spend enough money to fix the infrastructure problems.”