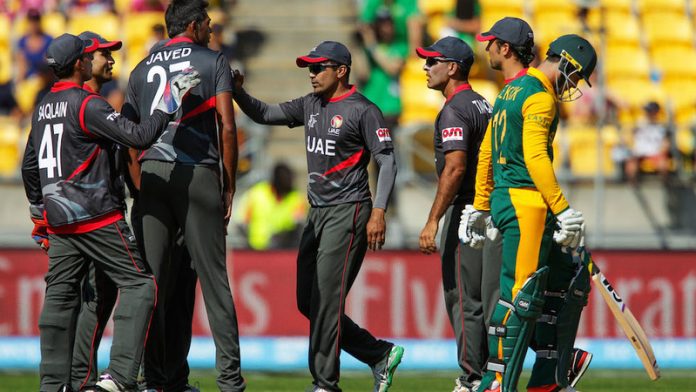 The reality has just begun to set in. For those members of the Proteas squad who have never experienced a World Cup and the reputation for failure South Africa has, they had their first taste of it against Pakistan at Eden Park in Auckland last week. And it was just the beginning.

“The weight of the reputation catches up with you,” said Jacques Kallis, watching from afar. “You enter a World Cup with no baggage, nothing weighing you down, convinced that every game will feel the same as the last. And for a while, that’s exactly how it is.”

Chasing 232 for victory against Pakistan, on the smallest international ground in the world, and failing, was an abysmal result.

Bizarrely, JP Duminy – who played the worst shot of the innings as the “last-chance” seventh specialist batsman, said: “The hunger probably wasn’t there from a batting perspective.” Almost certainly the opposite was true. There was too much hunger. Instead of calmly helping himself to a couple of singles, he lashed out with a hook shot, grabbing at the steaks and ignoring the salads, as hungry men do.

“Nobody, bar AB [De Villiers], took the responsibility to take the team through. I am one of the culprits, I threw my wicket away,” Duminy said. It is time to talk straight. After 16 years of abject failure, and denial, the truth can’t make it any worse.

“Results like this can destroy you,” said Duminy with eye-watering honesty. “We just have to accept that it’s part of the journey, and we have to get better.”

Corporate ideology
Alarmingly, Duminy spoke of “KPIs” (key performance indicators) while comparing the Proteas’s ability to make huge scores when batting first but failing repeatedly when chasing a score. Corporate ideology has a place in sport, but a limited one.

“The reputation catches up,” Kallis said. “Many of them arrived in Australia convinced that they were unscarred by what had happened before, only to discover that they are labelled with the same brush of failure that their predecessors were. And you can’t just wash it off.”

De Villiers, in his third World Cup, is all too aware of the stigma – and the negativity it creates. “The Pakistan game is past tense now, it’s gone. It’s all positive from now on. I believe 100% that we are the best team in the tournament and that we can win it and bring the cup home,” he said before the final group game against the United Arab Emirates.

“There is the added pressure of the World Cup stage. It doesn’t matter who you are or what player you are, those pressures are always going to be there,” said Duminy. “We need to accept the fact that we haven’t been good enough, that is the way forward for us.”

The way forward, with Sri Lanka waiting as quarter-final opponents in Sydney on March 18, is not simple or straightforward according to Kallis: “There is no ‘right’ way to go about things. There is no ‘right’ way of making things better. In five World Cup campaigns we spoke about playing games as though they were ‘normal matches’, and the first few always felt that way. But the closer we got to the knockout games, the more different it felt.”

The Proteas’s final group game is little more than a distraction before the quarter final, but should be welcomed as such. It is surely the final opportunity for Quinton de Kock to find some form before being jettisoned ahead of the knockout match, with De Villiers forced to take the wicket keeper’s gloves again. Class is permanent and form is temporary, but De Kock’s form is currently gone. And current is what matters now if South Africa are to win their first ever World Cup knockout game.

The only one out of six since 1992 which they did not lose, was the 1999 semifinal at Edgbaston, against Australia – which finished in a tie. Kallis recalls, clearly, that the Proteas weren’t the only chokers that day:

Festival of choking
“One run to win off the last four balls … We were the better side on the day but we lost among a lottery of tangled nerves. People love to say we choked, and I can’t be bothered to argue. But look at the highlights. It was a festival of choking on both sides. Australia were all over the place. Lance Klusener was the calmest man on the field until the fateful moment.”

South Africa’s problems this time around are as much practical as they are psychological. Playing only four frontline bowlers and seven batsmen, with part-timers making up 10 overs, is a tactical throwback to the 1980s, an extreme and extraordinary gamble. If anyone can get away with it, however, it is De Villiers.

Kallis recognised the difficulties encroaching on the team, however: “When batsmen are caught on the boundary, hooking, with just four runs an over required, you know there’s a problem. It seemed like the obvious time to absorb some pressure from a rampant attack and try to draw their sting.

“Sometimes, as batsmen, you need to recognise when bowlers are at their best, running in with their whole World Cup at stake. Our batsmen counter-attacked, which would have earned much praise if it had worked, but instead it backfired and we lost. There is a time and a place to back yourself, and that probably wasn’t one,” Kallis said.

For those who haven’t experienced it, who don’t know what to expect, their first World Cup knockout game will hit them harder than any other. And if they don’t recognise it straight away, the opposition will be quick to point it out. There’s 20 years of baggage on every one of their shoulders, like it or not.