More to Brits protests than meets the eye 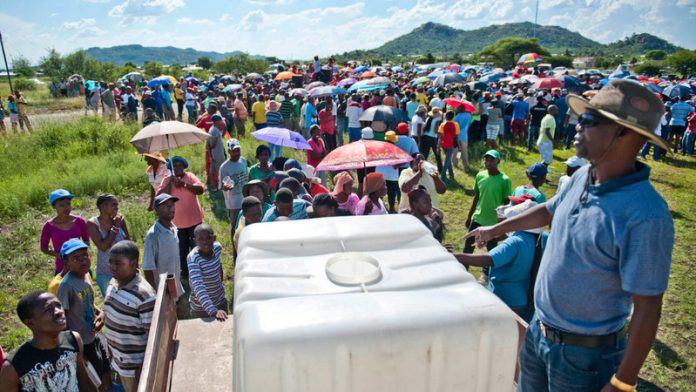 The stoning on Wednesday of a convoy of protesters by fellow protesters in the village of Maboloka, near Brits in North West, is a testament to the undercurrent of confusion and fear that has characterised ongoing service delivery protests in Madibeng municipality.

The bus was ferrying protesters from Jericho village to the Letlhabile township, the nerve centre of the mass action, when suddenly stones rained on the convoy in Maboloka as it navigated its way around rocks and burnt tyres blocking the road.

The province’s local government MEC, Collen Maine, had been expected to address protesting residents. But by late afternoon Maine had not arrived and local leaders said it was inevitable that protest action would continue if the MEC did not personally undertake to address the community’s grievances.

A visibly distressed leader from Jericho, Victor Molefe, said the convoy would return to Jericho.

“We’ll leave the matter in the hands of the Maboloka leadership to sort out the confusion,” he said.

Molefe is a senior official of Agang South Africa in North West.

Looting sparks violence
Sapa reports that a man was shot dead in Maboloka on Wednesday after being confronted by what police believe to be foreign shop owners, who fled the scene in a car.

The incident follows several foreign-owned businesses in the area, including a hardware outlet, being broken into and looted.

In Jericho the local tribal offices and the home of councillor Fana Matli had been burnt down, after they were accused of not doing enough to ensure the village had running water, according to a reporter from Letlhabile Community Radio.

The Madibeng municipality is home to the volatile Majakaneng to the west and Mothutlung to the east, both of which have attracted media attention in recent months as a result of sporadic incidents of violence over service delivery, mainly a poor water supply.

Residents, who refused to be identified fearing possible intimidation, lamented that food and other essential supplies were fast running out because delivery trucks have not been allowed to enter these areas.

Doctor arrested
Schoolchildren have spent the best part of the week loitering in the streets, with some parents fearing that they may join the often violent protest action.

Adding to the true-life drama was the arrest and subsequent release on Tuesday of Dr Sello Ntsoko, who was reportedly taken into custody at the scene of protest action in Damonsville, east of Brits.

Ntsoko sent an SMS to this writer confirming his arrest and subsequent release, saying: “I am out … Case dismissed.”

Although details of Ntsoko’s alleged involvement in the protests are sketchy, residents said he has always been at the forefront of the campaign for better services. He is also the owner of the ABC Motsepe League soccer club, North West Shining Stars.

Reports that media photographers were intimidated – with at least one camera thrown into the flames of a burning tyre – could not be verified.

Uneasy calm
For four days police in armoured vehicles and vans patrolled the affected areas, but were clearly outnumbered by protesters.

The ongoing protests have included numerous acts of criminality unleashed on shebeens and spaza shops – owned by locals and foreigners – by rampaging mobs breaking in to loot.

It has been reported that community leaders at the main entrance to Letlhabile warned looters to back off from the protest action, only for a group of unruly young men to march back into the township to cause further mayhem.

A number of protesters have been observed hiding their faces with headscarves, apparently modelling themselves on Boko Haram and other militant formations.

By late afternoon on Wednesday an uneasy calm had settled over the villages of Jericho, Maboloka, Madinyane, Moiletswane and Oskraal.

However, in Letlhabile, a local leader, identifying himself only as Mandla, warned of further protest action.