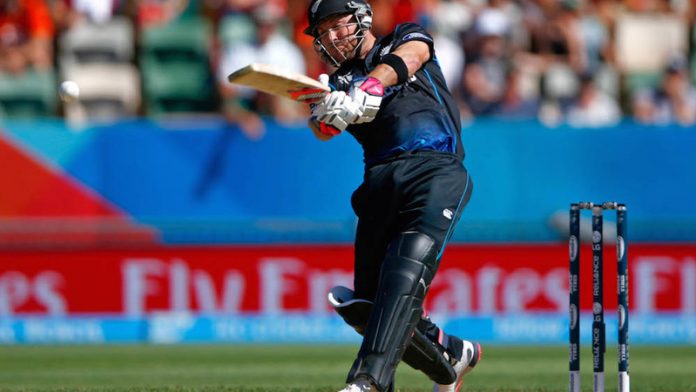 Grant Elliott struck a six from the penultimate ball for New Zealand to beat South Africa by four wickets in a cliffhanger and reach its first Cricket World Cup final on Tuesday, ending a run of defeats in its six previous semifinals.

New Zealand came to the last over of a rain-shortened match needing 12 runs to reach its Duckworth-Lewis target of 298 from 43 overs, and made it with just one ball to spare at Eden Park.

In Sunday’s final, New Zealand will face either Australia or India, who meet on Thursday.

Earlier Faf du Plessis made 82, AB de Villiers 65 not out, and David Miller 49 from 18 balls as South Africa compiled 281-5 batting first, taking 65 runs from the five overs left to it after the rain.

New Zealand then chased a revised total of 298, and reached that formidable objective with cricket fans of two nations holding their breath. The Kiwis were guided home by Elliott, with 84 not out, and Daniel Vettori, 7 not out.

Vigorous tempo
Brendon McCullum set the vigorous tempo of the New Zealand chase with an innings of 59 from 26 balls, which contained eight fours and four sixes. With Martin Guptill, the captain put on 71 in the first five overs, taking the total along almost at a record pace, all the time bringing the winning target more clearly into New Zealand’s sights.

But the chase faltered when McCullum was out, and when Kane Williamson was bowled for 6 at 81-2: Morné Morkel conceded 14 runs from his first over, then switched ends and removed McCullum and Williamson in a spell of three overs in which he took 2-11.

No single player commanded the run chase after McCullum was out, which meant it often proceeded in fits and starts, and the required run-rate grew, at times to the visible alarm of home fans. – Sapa