Proteas can hold their heads high 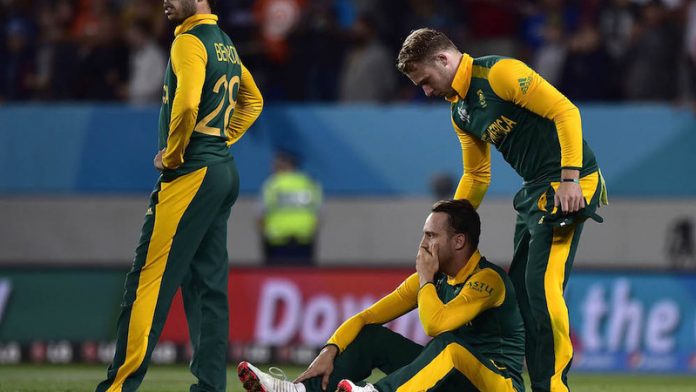 It can be tempting to downplay the poignancy of defeat with reminders of how cruel the real world is, to ridicule the pain felt by defeated sportsmen and deflated supporters by pointing to suicide bombers and refugee camps over dropped catches and missed runouts.

Perspective is important and we all know that deep down, but shallow pain still hurts. It doesn’t go away just because we compare it with starvation and mutilation. It is a different pain. Deep disappointment is a very long way from desperation and desolation and death.

Dale Steyn was the man entrusted with the final over at Eden Park and he did his best, but Grant Elliott had the measure of him, 14 years after leaving South Africa to start a new life in New Zealand. It was a matter of inches, his match-winning six with a ball to spare. That’s all that separates teams at the highest level.

Steyn was one of the first to speak in the change room after a period of time in which, as JP Duminy said, “you could hear a pin drop” and in which “there was no shortage of tears”. “We can hold our heads up high,” he said. “We have every reason to be proud of what we did and how hard we tried. There’s no shame in losing a game like that.”

It’s hard to imagine any of the Sri Lankan players feeling able to say anything similar after their crushing defeat to the Proteas in the quarterfinal. Sometimes there is shame. But not this time. “We have been knocked down, but we will get up. We will get back on the horse, we will try again,” Duminy said. “That is what ‘Protea fire’ is all about. The resilience to bounce back, however many times …”

Former England captain Michael Atherton felt moved enough after Tuesday’s match to write a story in which he proclaimed South Africa’s choker tag to be “utter nonsense”. He was not alone in pointing out that New Zealand made as many, if not more, mistakes than the South Africans during the semifinal. It’s just that errors at the end of these games remain freshest in the memory and the mistakes of victors are judged less harshly, if not entirely forgotten.

‘Perennial bridesmaids’
AB de Villiers said: “I have absolutely no idea” when asked where his team goes to from here. Another man who has experienced the bitterness of semifinal defeat (actually it was a tie in 1999) is Jacques Kallis: “You’re just happy to put one foot in front of the other for a while afterwards. Everything is blurry. You forget what’s important, it feels so important.”

It is important, but also not. South Africans might be spluttering over the inability to win a single knockout game in 20 years until this tournament but New Zealanders have been labouring under the “perennial bridesmaids” label for more than 30 years since the first of their six semifinal losses in 1983.

De Villiers will take the loss hardest of all. His titanic self-belief comes from many years ago; it is not an affectation created for the World Cup as was assumed by some unfamiliar with his personality. Every time he said “We are the best team here” and “I have no doubt that we will win the cup”, he meant it. Most mortal players have doubts that allow them the wriggle room to cope with failure. De Villiers does not.

He shares far more with his counterpart on Tuesday, Brendon McCullum, than mere talent, vision, ambition and leadership skills. As former wicketkeepers, they also share dodgy backs. And massively lucrative Indian Premier League contracts. And decisions to be made about their futures.

McCullum is a few years older so his imminent decision to retire from ODI cricket will be easier for New Zealand’s public to accept than a similar one from De Villiers. Or Steyn. Three years of relentless bilateral series, with little context other than personal milestones and job satisfaction, is hard to accept above a schedule that includes just Test cricket and a variety of well-paid, less physically taxing domestic T20 tournaments.

Meaningless matches
Australia’s Big Bash League franchises are ready to pay R200 000 a game for the likes of Steyn and De Villiers, along with England’s T20 league. The Caribbean Premier League isn’t far behind. There’s work, and good money, to be had elsewhere, too. Even if Cricket South Africa could match the money, the question will be asked: “Are meaningless, physically taxing 50-over matches what I want to be doing?”

World Cups, of course, are a different story. De Villiers and Steyn will be 35 by the time the next one comes along, in England in 2019. Right now, they would love to be there. Along with the most prolific ODI batsman of all time, Hashim Amla, their careers will feel unfulfilled without a World Cup winners medal.

Negotiations between players and employers have been more empathetic in South Africa than any other country so far. But the loyalty and understanding of supporters has also been stretched. Fans who buy tickets want to see the best. But the best won’t be so if they play every game.

The Proteas were “stranded” in Auckland for two days after their World Cup exit, waiting for sufficient seat numbers to travel in two groups. There was much time for talk of the future. Ideally, the “big names” will plot a way forward that benefits them, but mostly us.