How much longer for better school infrastructure? 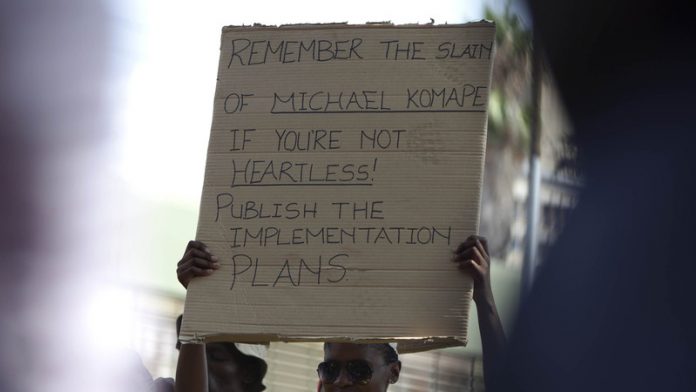 When pupils picketed outside the basic education department’s office in Pretoria on Wednesday for better school infrastructure, they were told by the department to wait “a few more weeks”.

But pupils across the country have been waiting for the provincial plans for fixing school infrastructure for four months already. “Be specific, what is a ‘few’?” a pupil shouted at departmental spokesperson Elijah Mhlanga when he made his speech in response to the pupils’ demands.

Following a three-year long campaign by nongovernmental organisation Equal Education, Basic Education Minister Angie Motshekga published the norms and standards for school infrastructure at the end of 2013. The document specifies what the standards of the infrastructure in every public school in the country should be. It also states that provinces had to submit their plans for how they would implement the standards by November last year to the Minister. The Minister received all the plans in November last year and released a statement in December saying she would make them public after she had considered them.

‘We have rights’
But Equal Education and its pupil members say four months is too long to wait for them. General Secretary Brad Brockman told the gathering that the public needed to see the plans “to make sure that [provinces budget accordingly] and schools are not left off the lists”. The organisation has sent numerous letters to Motshekga in the last four months demanding she make the plans public, but so far the department has not given it a date for when this will happen.

This phase of Equal Education’s campaign for better school infrastructure – implementation of the norms and standards – is called the Michael Komape School Infrastructure Campaign. It is named after the six-year old pupil who drowned in a pit toilet at his Limpopo school a year ago. When Mhlanga took the microphone to formally accept the organisation’s memorandum of demands he reprimanded pupils for “putting foreign objects in the toilets and blocking them”. A pupil responded by saying: “We don’t have toilet paper!”

‘Motshekga needs more time’
Later, Tshepo Motsepe, co-head of the organisation’s Gauteng office told the gathering that Michael Komape didn’t drown in a blocked toilet and his comment was received by cheers and whistles from the pupils. Mhlanga continued to say the department “accepts that some schools don’t have toilets”.

“We have just built 106 new schools … it is not that we are not doing anything just because there are no plans.” He said the public might have been waiting for four months for Motshekga to release the plans “but there are nine provinces”.

On Tuesday, the department released a statement saying it is “unfortunate that some organisations want the plans to be rushed at the expense of internal processes”. Pupils sang, danced and chanted: “Give us the plans”. One of them held a placard which read: “The simple point is that the government fails to serve the poor and vulnerable members of the community”.

One picketer said they were disappointed by the way they were treated by departmental officials. “We feel as if we are being disrespected. Their children are at schools with proper infrastructure.”  A grade 10 pupil, Jessica Kubheka, told the Mail & Guardian that she was picketing because “the department made promises and now it is not giving us the plans”.

She said the biggest problem with infrastructure at her school – Ikusasa Comprehensive Secondary School in Tembisa – is sanitation. “The toilets are smelly and blocked and they don’t flush… it makes me sick and then I miss school.” An Equal Education facilitator also said sanitation was the biggest problem at his former school in Tembisa. “The toilets and taps are in bad condition or sometimes they don’t exist.”  He said the picketers who are here today are here for the people who couldn’t be.