‘Our children learn better at home’ 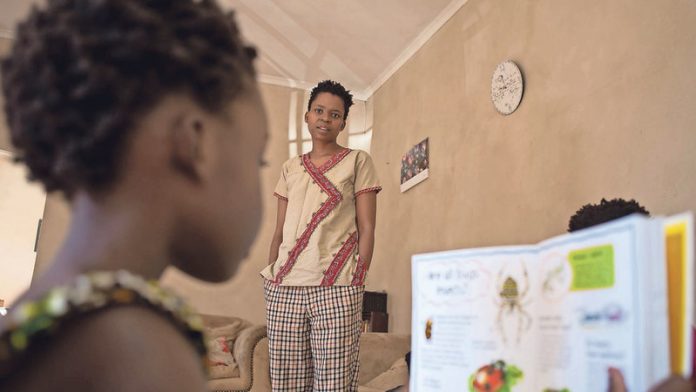 The tiled lounge in the Midrand apartment has three brown suede couches with metal legs arranged against the white walls. A small, low table draped in a red cloth and surrounded by children’s plastic chairs is in the centre of the room.

The walls are bare, except for a ceremonial African mask and an intricate wooden ankh engraved with Egyptian motifs facing off against each other from opposite walls. A bookshelf in the corner of the room contains children’s storybooks, books on computer science and volumes of the Metu Neter, a series on Kamitic spirituality. There is no television.

This is the classroom of nine-year-old Aza Madiba and her seven-year-old sister Chika Madiba.

The girls are part of a network of black families that have chosen to home-school their children primarily out of a concern about the state of the country’s education system.

For the day’s session, Thomas Jones, their tutor, who has also brought his two-year-old daughter along, starts them off with refresher questions. He asked that a pseudonym be used for this article.

Perhaps because of my presence in their classroom, Chika hesitantly breaks down the central nervous system in English, and Aza, a little more confidently, runs through the peripheral nervous and respiratory system. “There are the lungs, the diaphragm, the bronchiolis, the alveoli, the trachea …”, she says of the latter.

“What is the trachea?” I ask, the term sounding unfamiliar.

Life sciences
“It’s the windpipe,” says Aza, moving on to explain the workings of the lungs. Jones asks her about the function of the alveoli. She pauses for a moment then says they are where carbon dioxide is exchanged for oxygen.

Turning his attention to Chika, Jones asks her to list the components of the digestive system. Chika gets through the stomach, the big and small intestines before she starts faltering, allowing Aza to continue. Later, Chika effortlessly names the elements needed for photosynthesis to take place.

Jones then asks the children to count in multiples of five starting from the number two. They make it to 17 before Jones asks them to “look out for the pattern”, after which they find it much easier. 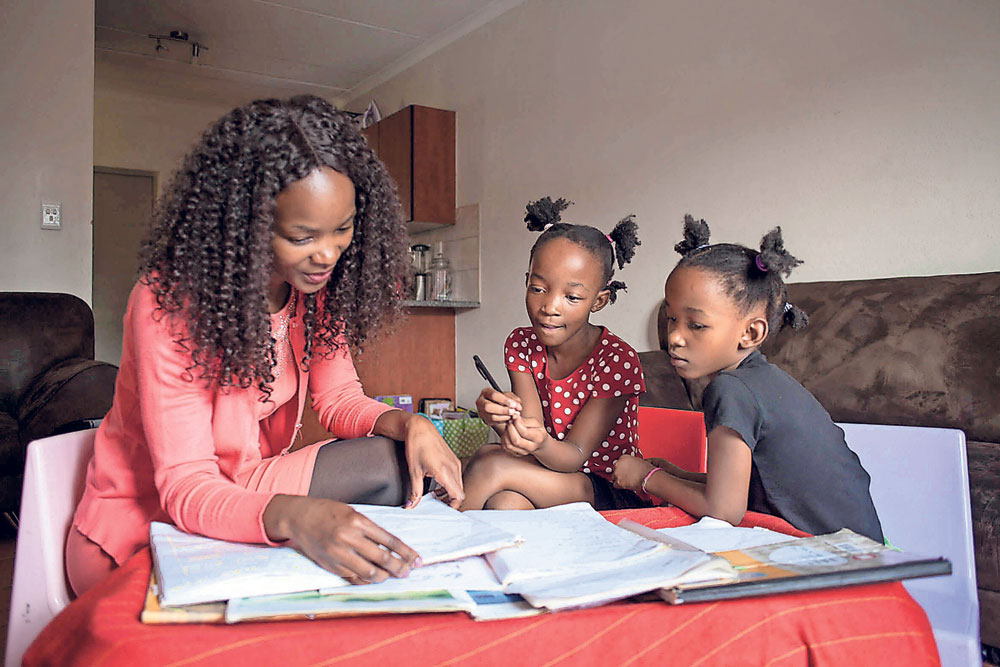 Jones now asks them to count in multiples of 13. Before Aza starts, eventually reaching 143, and repeating the process backwards, she asks whether she can consult her exercise book. She flips through drawings of human outlines and haphazard calculations. She stops at a page of multiples going from two to 15. The tables of self-drawn multiples are slightly crooked, but Aza studies them for a few seconds and is ready to count.

Jones casually cautions her about the untidy state of her exercise book.

Later the children read from Longneck and Thunderfoot, a story about two dinosaurs. Chika comes to the word “din” and asks me what it means. “It’s some kind of a sound,” I explain, glad I could participate.

The girls’ mother, Bongeka Madiba, arrives during a work break to check up on them.

She touches up their natural hair – styled into four buns – with a brush, while they go through an exercise of making up sentences with newly discovered words. The list includes words such as “educational”, “indefinite”, “parasite” and “advertisement”.

Oppressive history
“I had a good education but it did not affirm me as an African or a woman,” says Madiba of her decision to home-school her children. “I have to affirm them as free people. The South African history we were taught at school starts and ends with oppression.”

The statuesque Madiba is a software developer at the Johannesburg Stock Exchange. She enthusiastically recounts how she had recently found someone to teach her children science experiments and tells me that she introduced Jones to three other parents. The parents contribute to the teaching with additional activities such as sports, meditation and coding.

Her friend, 36-year-old Maditaba Msimang, is also home-schooling her two children, aged eight and five. She was not willing to use her real name for this article.

“The thing with home-schooling is that they’re learning all the time,” she says from the office of the human rights law firm where she works as a fundraiser. There is a whimsicality to her and she wears a tiara held in place by short dreadlocks.

‘My son is starting with moon phases now and he’s interested in planets,” she says between puffs on a cigarette.

“He’s five, so in a traditional school he’d be in grade R and wouldn’t be able to learn all that. School is a fake reality in any case. In real life you are with people of all ages – nephews, aunts and cousins. Home is a safe environment. They don’t come back saying ‘there’s God in the sky’ – things that teachers believe.”

A ‘rubbish’ idea
Msimang said she had attempted to register her children with the Gauteng department of education, but had been “lambasted” by an official who told her that “home-schooling is rubbish and it is for white people”.

Msimang bemoans the fact that, in 2012, the average pupil-to-teacher ratio in Gauteng was more than 31:1.

Jones, the tutor, is an African-American with degrees in biology, chemistry and economics. He first came to South Africa in 2004 and has since returned to the country on several occasions to tutor children.

With the current network of parents, he tutors 11 children aged between three and eight.

The subjects he teaches range from maths and English to swimming and the sciences. He usually sees the children three times a week for about two hours, never seeing more than two children during each sitting. His monthly fees differ, but range around R3 000 a family.

Jones says the key to his teaching method is being able to motivate children to want to learn on their own.

“[Eventually] you develop a sense about kids, about what the problem is,” says the gangly Jones. “Some of it is not even the education system’s fault.

“Most movies, even cartoons targeted for kids, have stereotypes that kids pick up on, like the nerd idea. The nerd is not socially adept. He has no friends. He’s not fun. So you put the kid in a school environment [and] they don’t want to get an education. What’s the motivation to wanting to be a nerd? All you can say is ‘if you get an A, I’ll buy you a bike’.

A pivot point
“I have to motivate kids to want to be good at those subjects because the teachers are not motivating them. That’s why some parents are reaching that pivot point where they’re saying, ‘I don’t want my children in school.’ It’s an emotional choice because you want to have faith in the system.”

Jones says, by the time his pupils are 12 or 13, all of them will most likely be able to study independently at tertiary level or attend university courses. According to the 2011 national census, 57?000 children are being home- schooled in South Africa, with more than 80% percent of these being black children.

Leendert van Oostrum, of the Association for Homeschooling rights group and the president of the Pestalozzi Trust Legal Defence Fund for Home Education, says that he suspects 57?000 to be both an “over-count” and an “undercount”.

In the rural areas, and in the former homeland areas, “there is much more home-schooling going on than we know about” but he believes that saying “80% of home-schoolers are black” is an overcount.

Van Oostrum added that, in 2014, just over 1?000 home-schooled children were registered with the department of education, a figure that represents less than 2% of the census figure.

“Parents have real grounds for being concerned with registration. You just have to take one look at the conditions and results from the public school system operated by the government to see why parents are careful of interference by the same departments.”

According to Van Oostrum, the South African Schools Act says that home-schooled children must be registered with the provincial departments but regulations governing this have not been passed in 20 years.

He reiterates that every child has their own personality and a generic curriculum will fit only a small percentage of children. “The people who know that child best are its parents. They know that child’s personality and its circumstances and so on. You have to assume they have its best interests unless we can prove otherwise.”

The department of basic education did not respond to the Mail & Guardian’s questions.

Bizarre codes of conduct at schools: Some strange, hilarious and outrageous rules

It takes a village to raise a suburban child