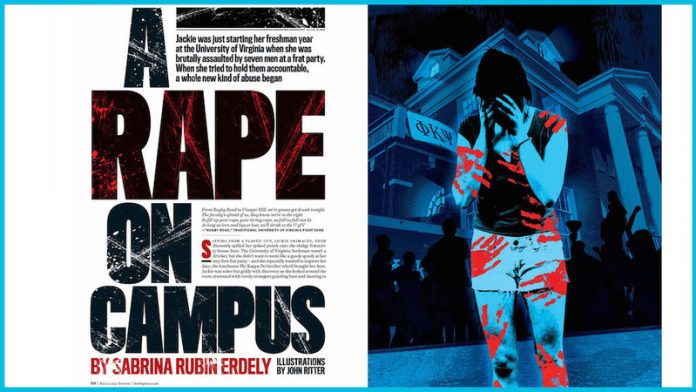 This past weekend Rolling Stone magazine in the United States apologised and retracted its story about a sexual assault at the house of a University of Virginia fraternity (an all-male university society) after an independent investigation by the Columbia University Graduate School of Journalism found that the magazine had failed in “basic, even routine journalistic practice”.

Sharyn Potter, a medical sociologist at the University of New Hampshire and the co-director of Prevention Innovations, an initiative to end violence against women, said she was concerned that discussions about the reporting errors in the piece would distract people from the prevalence of sexual assault.

“I worry that the whole issue of campus sexual assault is going to get muddied up in what the reporters did and didn’t do,” she said. “On balance, I don’t think the Rolling Stone scandal was in any way a positive,” said Scott Berkowitz, president and founder of the Rape, Abuse and Incest National Network.

A spokesperson of the University of Virginia sexual assault education group, One Less, said it was concerned about how the report could affect trauma survivors.

“We are fearful that hostile reactions to the fall-out of the Rolling Stone article will leave many survivors of violence feeling unsupported and deterred from seeking resources,” One Less said in a statement. “It is misleading that Rolling Stone chose one extreme case to represent college sexual assault, when, in reality, we know that sexual assault presents itself through a range of experiences.”

Will Cadigan, a member of the university’s all-male sexual-assault peer-education group, One in Four, said he was worried about the article inhibiting other people from coming forward with their stories. “I’m sure that there are many who blame Jackie [the woman whose story was the focus of the article], because that is the culture we live in and the simplest answer, but many people I have interacted with are angry that Rolling Stone acted so rashly,” he said.

Berkowitz, on the other hand, said he was encouraged by how much of the public seemed sympathetic to Jackie. And he said he was also happy with how campus police responded to the article (A rape on campus, by Sabrina Rubin Erdely). They immediately opened an investigation, which was suspended in March after police could not confirm that a rape occurred at the frat house in question, Phi Kappa Psi. The university responded to the story by temporarily suspending all fraternities on campus and calling for a review of how it addresses rape allegations.

A recent upturn in the numbers of people coming forward to the media and on social networks with stories of rape and sexual assault has drawn attention to the difficulties they face, including the stigma attached to them and a fear of retribution, and has put pressure on universities and the government to respond.

“I hope that victims look at that and say, you know what, I can’t do anything about this story, but I think if I come forward, people will take it seriously and give it a fair look,” Berkowitz said.

Cadigan was also cautiously optimistic. “We are miles away from where we were when I joined One in Four in 2011,” he said. “Then our focus was mostly on trying to convince people that this issue existed. Now, most people have a baseline knowledge and seem ready to listen.”

Since the 1980s, the rates of campus sexual assault have remained steady: one in five women is a victim of an attempted or a sexual assault. False allegations of rape are rare.

“What has been really amazing in the past five years is these young victims who have been willing to put a face to the crime and be able to say this happened to me and really come forward as opposed to remaining anonymous,” Potter said. “And I think the power of these young women who look like our daughters, our neighbours, has really begun to bring attention to this issue.” – Guardian News & Media 2015