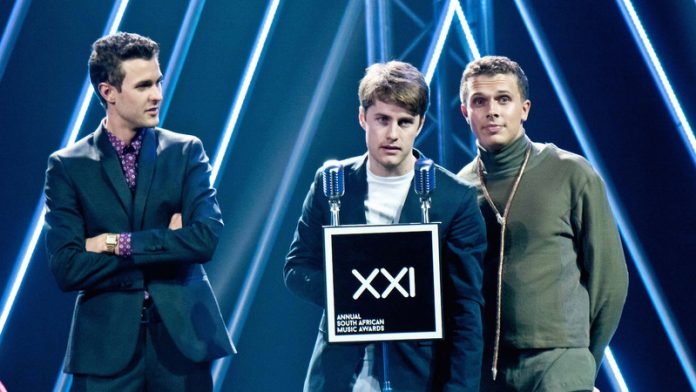 Hip hop artist, Hip Hop Pantsula (HHP), born Jabulani Tsambo, suited up and channelled James Bond at the 21st (XXI) South Africa Music Awards, where he hosted the award ceremony. The music award show, which took place on April 19 at the Sun City Superbowl, honoured musicians who stood out among their peers in 2014. HHP failed to impress as the host, as he rambled through the ceremony.

In this game you WIN or you LEARN. HOSTING isn’t my profession. Fede I’m glad I did this. #FishOuttaWater. Thank you @TheSAMAs #HadALottaFun

Pop trio, Beatenberg, however, had a better evening. The Capetonian trio walked away with six trophies that included Album of the Year for  The Hanging Gardens of Beatenberg album and Duo or Group of the Year award. Beatenberg shot to fame with their collaboration with DJ Clock on the hit song  Pluto in 2013, which received the Best Selling Full-Track Download and Best Selling Ring-Back Tone SAMA trophies.

“Can I give a huge shout-out to Clock and to Edgar. This has changed my life and I started out a fan. Pluto is a song that brought people together,” said drummer for Beatenberg, Robin Brink.

Local hip hop came out victorious in the highly contested categories: Male Artist of the Year, Newcomer of the Year and the KIA Record of the Year.

Kwaito royalty, M’du Masilela and Mandla “Spikiri” Mofokeng both received the Lifetime Achievement awards for their contribution to the music industry, especially in the kwaito genre.

Hip hop has arguably overtaken kwaito in the recent years, but according to Masilela there is a “kwaito revolution” that is about to take place. The 90s kwaito star is ready to take kwaito to greater heights.

Flautist and saxophonist,  Zim Ngqawana is the recipient of a posthumous Lifetime Achievement Award. Ngqawana, who passed away after suffering a stroke in 2011 at the age of 52, gave us songs such as Qula Kwedini and Ebhofolo.

Despite memorable performances by Cassper Nyovest with Prime Circle and AKA with Duncan and Mdu, the award show fell flat. Reactions to the show on Twitter were far more entertaining than the televised show.

This is what people had to say about the awards on social media:

Not saying the #SAMAXXI are bad, but I’d rather be at a memorial service.

These awards are like a bad relationship; you wanna leave, but you keep hoping they will get better. #SAMAXXI

AKA, Duncan and Mdu gave a memorable opening performance of old and new school hits.

Proper opening by AKA, Duncan & the legend Mdu #SAMAXXI

Forget zippers, AKA made sure all that all eyes were on him with lights on his leather jacket.

How can AKA’s jacket have lights while the rest of us are experiencing #loadshedding ??? #SAMAXXI

Gospel singer and winner of the Best Traditional Faith Album, Sfiso Ncwane, raised eyebrows when he referred to his wife Ayanda as his Kim Kardashian during his acceptance speech.

The unresponsive audience came alive when Generations’ ( The Legacy) onscreen couple, Gadaffi (Vuyo Dabula) and Tshidi (Letoya Makhene), took to the stage to present an award.

The Minister of Sport and Recreation South Africa, Fikile Mbalula, thought he could’ve done a better job at presenting the award show and called on the public to vote on Twitter on whether or not he would be suited for the job. All in the name of fun.

Hahaha… Thanx minister “ @MbalulaFikile: CassperNyovest had me like #SAMA2015 pic.twitter.com/5byLfMAyRL”

aKING’s guitarist, Andrew Davenport, seemed like he had too much fun before the show. Davenport appeared to be intoxicated while he was on stage accepting the rock band’s award for Best Rock Album.

Never seen an artist so drunk while collecting an award,,, #Aking #Samas

Album of the Year
Beatenberg – The Hanging Gardens of Beatenberg

Male Artist of the Year
AKA  – Levels

Crime and medicine: How to keep criminals out of our hospitals