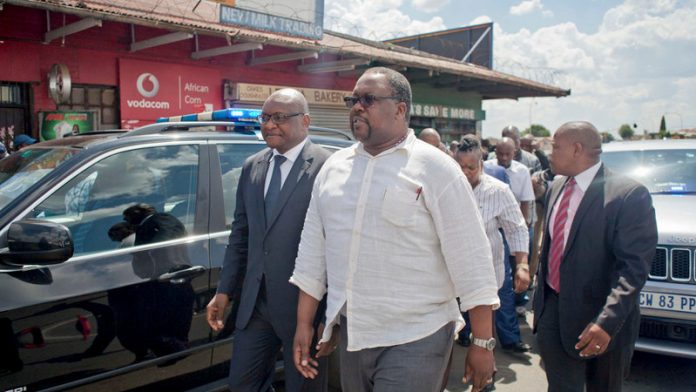 Where was Police Minister Nathi Nhleko this week when the government was struggling to contain the raging xenophobic inferno as the world watched anxiously? Where was he when police commissioner Riah Phiyega got involved in a dogfight with her predecessor, Bheki Cele, over who was the better police boss?

This was clearly the biggest crisis to affect Nhleko’s portfolio since his appointment last May, yet he appeared to be missing in action.

The xenophobic attacks, in which at least seven people have been killed and thousands displaced, exposed the tacit tension that exists between Nhleko and his security colleagues.

It has intensified following a disagreement on whether the army should back up the police to control the violence against foreigners, mostly from Africa, allegedly sparked by Zulu monarch Goodwill Zwelithini’s statement last month that foreigners should pack up and leave.

On Sunday in Durban, Nhleko reiterated what he had said in Parliament last week: that the situation was under control and there was no need for army reinforcements. And then the police minister seemingly disappeared off the radar.

Despite the king’s peace imbizo on Monday, the situation was still tense and unstable, prompting President Jacob Zuma to cancel his trip to attend the Asian-African summit in the Indonesian capital of Jakarta. Zuma also summoned Nhleko’s defence counterpart, Nosiviwe Mapisa-Nqakula, back from the same conference.

On Tuesday, Zuma and some of his security colleagues decided that the police minister may have miscalculated the situation and the army was deployed in Nhleko’s absence. This was a glaring indication of the rift within the security cluster and Cabinet over how to handle the xenophobic attacks.

They persuaded Zuma, as commander in chief, to authorise the deployment and within hours there were boots on the ground.

Mapisa-Nqakula tried to play down what appeared to be a clash of strategies when she justified the deployment of the army, in contrast to the view expressed by her police counterpart.

When asked why Nhleko was absent at the announcement of such a crucial decision, a visibly irritated Mapisa-Nqakula said: “Minister Nhleko is not an individual minister. He is part of a cluster. We are standing here now as the cluster of ministers. Minister of home affairs, minister of defence, minister of state security but in addition, working as acting minister of police. In Cabinet we work as clusters, not in silos. We don’t allow silos,” she said.

“Minister Nhleko – in his absence somebody is acting on his behalf and [it is] this person,” said Mapisa-Nqakula, pointing to Mahlobo.

Nhleko’s whereabouts were shrouded in secrecy, with some of his colleagues not being aware of or – oddly – refusing to disclose his location.

The Mail & Guardian approached Mahlobo, Mapisa-Nqakula, two deputy ministers, official police spokespeople and the presidency to try and find out where Nhleko was, without success.

Two senior officials in the police ministry – who asked not to be named for fear of reprisals – said no one was aware of details of Nhleko’s purported trip abroad.

The sources questioned why Nhleko was allowed to be away when the president had cancelled his trip and his defence minister cut hers short in a bid to contain an explosive situation.

Nhleko and his spokesperson could finally only be traced on Wednesday. Curiously, Zuma had allowed the police minister to attend a low-key anti-drug conference in Russia en route to a bilateral meeting in China. He had been in Moscow since Monday.

Speaking from the Russian capital on Wednesday night, Nhleko’s spokesperson, Musa Zondi, said that the minister still stood by his statement that the army should not have been called in.

“The minister’s view has not changed,” he said.

However, Zondi later tried to qualify this by saying that Nhleko holds the view “based on the information he received before his departure to Russia” on Monday.

On Thursday, Nhleko also told the M&G from Moscow that although he maintains his position that the police are able to handle the xenophobic attacks on their own, the situation could have changed after his departure.

“That decision [to deploy the army] naturally will stay in the hands of the security cluster, whether there is an acting minister or not. As per the assessment then [last week], we saw no need to deploy the army. As to how the condition changed I cannot say, because I’m not in the country,” he said.

Does he now believe the army deployment was the correct decision?

“I am in Russia. I have not made an assessment of the conditions on the ground. It would be completely [inappropriate] for me to say anything when I’m not on the ground,” Nhleko said.

The last time Nhleko received an assessment of the xenophobic attacks was on Sunday.

“The review would have been made based on the assessment carried out in my absence.”

Zondi said the Brazil, Russia, India, China and South Africa (Brics) anti-drug conference was too important for the minister to miss. “We were driving the co-operation and we can’t at a certain point renege on this,” he told the M&G.

On Thursday the police minister justified his Russian trip, saying “we all agree that both in South Africa and the world in general drugs are a big problem”.

“There is no vacuum in the sense that the president has appointed an acting minister. It’s not like you don’t have a political head. Let us not underestimate the [Brics] conference because it is a continuation of the Durban conference.”

When asked why he did not send his deputy, Nhleko accused the M&G of “shifting the goal posts”.

This comes as the world reacts to the gruesome pictures in the Sunday Times of the fatal stabbing of Mozambican Emmanuel Sithole in Alexandra. A Zimbabwean couple was shot in the same township on Monday. Seven people – mostly foreigners – have been killed in the latest flare-ups, and thousands of foreigners have been displaced and housed in makeshift refugee camps.

Several countries have expressed concern and some have issued cautionary travel notes; four men also threatened to set the South African high commission in Ghana ablaze and the consulate in Lagos was shut down.

Also absent from the press conference to announce the army’s deployment was Phiyega, who was attending a parliamentary portfolio committee meeting.

However, in the middle of a security crisis she chose to enter into a public spat with Cele – now deputy agriculture minister – on Wednesday.

In interviews, Cele said the police service was bleeding under Phiyega. He was apparently responding to Phiyega’s letter to City Press in which she said she had inherited “gigantic problems” in the police.

In an emotionally charged statement, Phiyega reminded Cele that “the SAPS is a huge institution and much bigger than any individual”.

“I am sure that Bheki Cele had his mandate too when he had the opportunity to manage the SAPS, but it is my turn now … He must accept that he no longer holds the baton.”