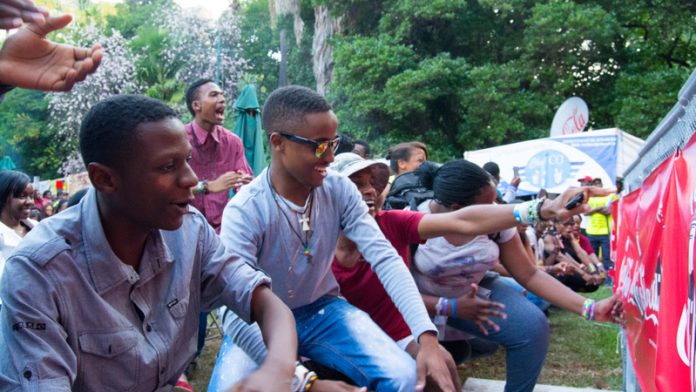 The Air Zimbabwe plane has seen better days but it gets to Harare in one piece. The first cab driver I meet drives me to Natal Road, where I will be staying, and then to the main stage of the Harare International Festival of the Arts. I am joining the festival mid-stride, on the third of six days, and I need to catch up, quickly.

Zimbabwean dancehall star Thabani Ndlove, aka Buffalo Souljah, provides the perfect welcome to the festival. He hails from Zim­babwe but is now based in South Africa.  Throughout the weekend I marvel at how popular reggae and dancehall music remain in that country, alongside a galaxy of other genres.

The festival, held annually at 15 stages around Harare, hosts local and international musicians, theatre makers, poets, comedians, circus performers, fashion designers and visual artists. It is close to impossible to see every­thing and it is best to choose one’s shows carefully.

Running through this year’s programme, I noticed that “all roads lead to Rome”. For example, theatre lovers could plan their schedule without having to worry about missing M.anifest, Salif Keita or any of this year’s musical headliners, and vice versa.

But, because there are so many venues, downloading the festival app or buying the $5 programme was essential. And also, because most of the shows after dusk shared the open-air Harare Gardens site, few music shows ran concurrently. The cheapest accommodation I could find closest to the festival venue was a five-minute trip in a minibus taxi from the festival venue.

But tempting as the R5 taxi fare was, I hesitated to take a mode of transport I wouldn’t hesitate hailing back home. The stain of the xenophobic attacks in South Africa were still fresh and I was a South African in Zim­babwe. In the end, it was clear that there had been no reason to hesitate or fear the worst. In conversations with new acquaintances that weekend, the hesitation became a confession rather than a concern about my safety.

I admitted to being South African every time, except when one man, who had had about a litre of Chibuku Super (sorghum beer) asked me where I was from.  And, although the concern about what South Africans had done to foreigners was widespread, I was never made to feel personally responsible.  The festival’s theme this year was “Articulate!”, which raised the question of what young Zimbabwean artists were articulating and whether they had the freedom to do so.

I soon realised that Zimbabwe is many things to its people, both inside and outside of its borders. And, because of this, what the young artists had to articulate was in some way unique to their own perspective. About three weeks before the festival was set to kick off, a court case, aided by Zimbabwe Lawyers for Human Rights, representing the artist Owen Maseko, came to an end. It started in 2010 when Maseko exhibited work that was part of an exhibition titled Sibathontisele (“Let us Drip on Them”).

It was inspired by the Gukurahundi massacres in Matabeleland.  Five years after the exhibition opened, the Zimbabwean Supreme Court instructed Maseko to remove it, which was found to undermine Zimbabwean President Robert Mugabe’s authority. The Bulawayo-based poet Philani Nyoni, who won the festival’s poetry slam competition, says Zimbabwe “used to be a vicious climate.

If you needed to say stuff, you needed to be innovative. You sort of had to find mediums to get your message across without being too suicidal.”  He believes that things are mellowing out with the adoption of Zimbab­we’s new Constitution. Its liberal underpinnings could provide an opportunity for greater freedom of expression.

But he also believes that the document alone cannot ensure greater freedoms. He says these new freedoms are “on paper”; “it’s up to us to really push those bounds and find out what’s up.” For the 25-year-old singer and composer Chashe Musarurwa, who was born in Zimbabwe but is now based in Britain, freedom of expression comes as a lesser challenge in her career as an artist. Her battle against the mindsets created by the media about her home country are her biggest challenges.

“I mean, our people are really going through some rough times, but those are not the only stories there are to tell. Around us people are laughing, people are so kind hearted and I think those stories need to be told as well as the stories of what’s going on,” she says. Musarurwa shared the stage at the festival for the first time with the singer and composer Tinashe Makura, with whom she made the 2014 hit Zvekupenga.

He agrees with her, and says his lyrics mainly dish out positivity to counterbalance the negative impressions created about Zimbabwe.  “We are here to change people’s perception about who we are as a people, and the easiest way to do that is through the music,” Makura says.

Two parts of another act this year were returning to Zimbabwe as expatriates. True Vibenation are a brass-based hip-hop trio with discernible African music influences. The twins were born in Harare but raised in Australia. When the brothers were just three years old, Bhekimpilo and Vulindlela Mkwananzi moved to Australia with their Australian mother and Zimbabwean father.

Their intermittent pilgrimages to Zimbabwe took place when they were eight, 12, 19 and 26. “In Australia, we have a small community of people from African descent and we all cling to those roots. We see the same faces at each other’s gigs. And, being here, everything is African and we try to hang on to it all but we can’t,” Vulindlela says.  Performing just a stone’s throw from Avenues Clinic where they were born adds even more significance to their festival performance.

Being recognised on the street by young Zimbabweans who know them from their band’s online presence is an added bonus. For them, being in Harare comes with a sense of belonging that cannot be matched in Australia. For the sheer scale of the event, having every act run at all is an achievement akin to the construction of Great Zimbabwe. It is surprising, then, how accurately the festival’s programming ran — perhaps too smoothly for some of us because this left very little leeway for arriving late for shows.

One thing the festival doesn’t do well is to guide its audience to make decisions about what to watch. Although there is certain egalitarianism in giving the different acts a fair chance at attracting audiences, it would have helped to have a general idea of what not to miss based on one’s tastes and preferences.

Because each performance, exhibition or workshop had to be paid for individually, I had to consciously decide on each show and couldn’t be swept along with the crowd. Ticket prices for individual performances ranged from $6 to $30, which translates to anything from R500 to R600 a day just for tickets. Throw in meals and a few fingers of drink and you’re spending roughly R1?000 a day.

The exchange rate between the rand and the dollar, and the high cost of basic needs in Zimbabwe (whiskey, of course, being one of them), made the festival relatively expensive for a South African. But to counter the problem of access to the festival for those without the means to dish out that amount of money, the Oasis First Street Stage presented a gratis taste of the festival’s offerings.

The festival is on an international scale and has managed to survive regardless of the ebb and flow of Zimbabwe’s politics. And, if the number of children, adolescents and young adults at this year’s festival is anything to go by, the cultivation of future audiences and artists is in good hands, or in Harare at least.  But one cannot help but wonder how many of the children scurrying about the festival fields this year will be visiting the festival as expatriates and how many of them will be living in Zimbabwe.

On the flight back to Johannesburg, we are joined by two high-school age children in school uniform. I wonder if they will one day elect to lend their skills to Zimbabwe or seek greener pastures elsewhere.