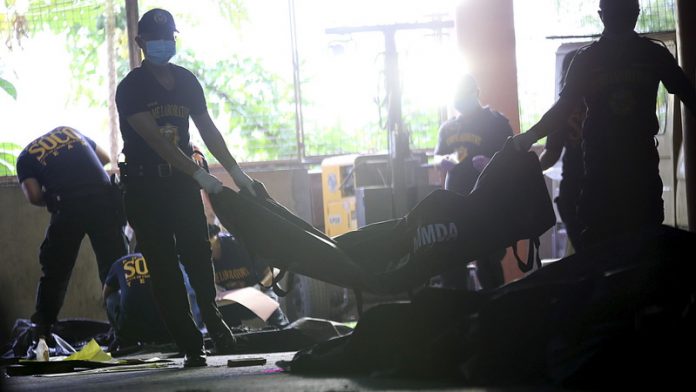 Seventy two people have died in a huge blaze at a footwear factory in the Philippine capital Valenzuela mayor Rex Gatchalian said via SMS and 26 others remain missing, authorities said on Thursday, as grieving relatives described sweatshop conditions and poor fire safety standards.

Rescue workers pulled dozens of corpses out of the ruins of the two-storey building in Manila, many of whom were believed to have been trapped on the second floor after the blaze broke out just after noon on Wednesday.

“Many of those retrieved were reduced to skulls and bones,” national police chief Leonardo Espina said during an emotional press conference, as city authorities confirmed that 45 bodies had so far been found.

“Someone will definitely be charged because of the deaths. It doesn’t matter if it’s an accident, people died. Right now, we are investigating to clearly define what happened. For sure, someone will be charged.”

Sparks from welding equipment used to repair a broken gate are believed to have caused the fire when they ignited flammable chemicals stored nearby.

The building, among a long row of factories in the rundown district of Valenzuela on the northern edge of the Philippine capital, made cheap slippers and sandals for the local market.

The footwear had names such as “Havana” that sound like well-known global brands, company employees said.

No safety standards
The factory workers toiled for as little as 300 pesos ($6.70) a day routinely surrounded by foul-smelling chemicals and were not aware of fire safety standards, survivors and relatives said.

“The families can’t help but be angry about what happened. We will never forget this,” Rodrigo Nabor, whose two sisters were inside the factory and remain unaccounted for, told Agence France-Presse.

Nabor was among relatives of factory workers waiting for body bags at a village hall that had been converted into a makeshift morgue.

“I’ve lost hope that they survived,” said Nabor (31) who works at a nearby plywood factory.

“I can’t explain how I’m feeling. I didn’t sleep at all last night. I just kept walking around the factory hoping for news.”

“They said they keep an electric fan on to drive some of the smell away,” he said.

Nabor said their pay depended on how many sandals they finished, which could be as little as 300 pesos a day. Nabor’s sisters each had a young child.

“I had never been involved in a fire drill ever,” Victoriano, who had worked at the factory for five years, said.

Victoriano said she was able to escape because she was near the front door when the blaze started.

“The building was totally damaged, the roofs caved in and portions of the second floor collapsed,” the city’s fire marshal, senior Superintendent Rico Kwantiu, told AFP.

Gatchalian told reporters that rescue workers would continue scouring the building on Thursday for the 26 people still missing, while also checking to see whether they had escaped.

“The city government is still praying and hoping some of them must have gotten out,” Gatchalian said.

Deadly fires regularly rip through the poor shanty areas of the Philippine capital, where there are virtually no fire safety standards.

In the deadliest fire in Manila in recent times, 162 people were killed in a huge blaze that gutted a Manila disco in 1996. — AFP