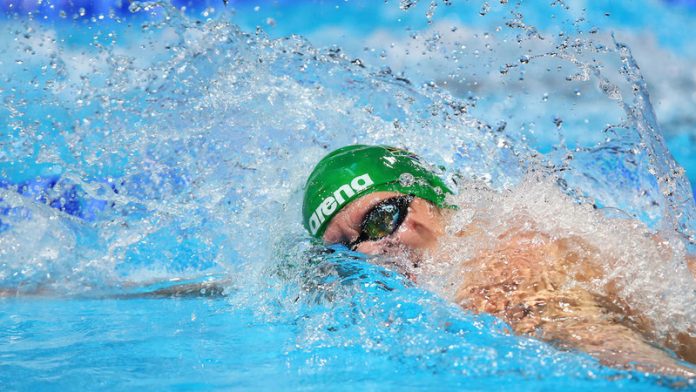 Myles Brown trained really hard last year. He was eyeing individual medals in the swimming pool at both the Commonwealth Games in Glasgow and the Fina short-course world championships (a 25m event) that took place in Doha, Qatar, in December.

When neither materialised, he was really disappointed – so much so that he decided to take a break from swimming. “The pressure and expectations [from within myself] got the better of me,” he tells me at a coffee shop in Westville, Durban. “I didn’t achieve what I wanted to do and it was quite a big disappointment for me. Straight after Doha, I took one and a half months off swimming.”

Brown spent that month surfing, playing golf and doing a lot of thinking. “A break is obviously not advisable for a swimmer, but for me it was necessary – to figure out why I was doing what I was doing and to regain my love and passion for the sport.”

The break seems to have paid off for the 22-year-old, if his performances at April’s South African National Aquatic Championships in Durban are anything to go by.

Beating Chad le Clos
In between he caused an upset, beating Olympic gold medallist Chad le Clos in the 200m freestyle final. How did that make him feel? “He’s a great racer; he’s one of the best swimmers in the world. It’s kind of special to have someone like that in the swimming pool that you can race and train with,” said Brown. He and Le Clos are coached by Graham Hill.

“To beat him was great; it’s a step in the right direction. Racing can go anywhere – you never know what’s going to happen on the day. Fortunately this time I got the better of him, but who knows? On the day it can go either way.”

Brown’s times in the 200m, 400m and 800m saw him qualifying for the Fina world long-course championships – which will be held in Kazan, Russia, later this year – in all three events.

When I point out that although he doesn’t have a Wikipedia page dedicated to him (yet), his name frequently featured on newspaper street posters around Durban during the championships, he grins broadly. “It’s been a nice response after the SA champs,” he says. “I’m still fairly new to the international scene. I only started making the senior teams in 2012.

“I wouldn’t say I’m one of the big names in SA swimming, but hopefully in the new year I can be one of them, along with Chad le Clos and Cameron van der Burgh.”

Brown seems to be a modest person. Although he says he wasn’t an especially good swimmer at primary school level, he was offered a swimming scholarship at Westville Boys’ High School – widely believed to be Durban’s premier training ground for schoolboy swimmers.

However, his parents wanted him to give equal attention to his academic performance, so he chose to accept a scholarship at Kearsney College, a private school situated midway between Durban and Pietermaritzburg.

Gap year
“I would get up at 4:30am and go for training, then go to school till 2:30pm, then head off to afternoon training,” he recalls. “By the time you came home it would be 6pm – but from a young age, my parents instilled in me some core values like determination and always putting in 100%.”

The perseverance paid off and he matriculated with six distinctions before registering for a BCom degree in 2011. At the end of the year, he and his parents decided it was time for him to take a gap year so that he could focus on getting to London for the 2012 Olympics.

But it was not to be – Brown didn’t qualify for London; something he considers a blessing in disguise. “I don’t think I was mentally ready. I was very new to swimming on an international stage. I didn’t focus on the negatives. I stayed at home and watched the Olympics, and we had a very good swimming team.

“That was one of the turning points in my swimming career. After that, I really picked up my effort and ended up qualifying for my first world short-course event in Turkey.”

In 2008, as a 16-year-old, Brown had watched his hero Michael Phelps reign supreme in the pool at the Beijing Olympics. “It was truly inspirational to watch him,” he says. “I’ve always wanted to go to the Olympics and compete. I think it’s a great honour, and the pinnacle of a sportsman’s career.”

Could Rio 2016 be the realisation of a long-held dream? He smiles. “It’s been a goal. I won’t say I get up every day and think of it, but I just want to try to have a really good year this year, and carry that momentum on to the Olympics next year.”

Rikako Ikee, who just turned 16, is ready to find happiness at Rio Olympics