Mad Max: from the Ozploitation wilderness to the mainstream 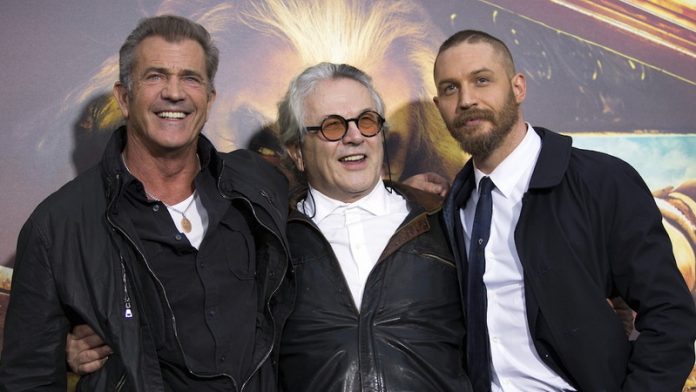 From humble beginnings as a low-budget revenge thriller shot guerrilla-style on country lanes outside Melbourne, George Miller’s post-apocalyptic saga is preparing for its biggest and most artfully boisterous outing yet in Mad Max: Fury Road.

Miller, a qualified doctor who swapped stethoscope and emergency room for viewfinder and film set, dreamed up Australia’s first global action hero: Max Rockatansky. In the first movie, Max is a Main Force Patrol cop living in a world slowly going to hell. He loses his best mate, wife and baby son to a band of psychotic bikers and is compelled to take revenge. In Mad Max 2 (1981) and Mad Max Beyond Thunderdome (1985), he’s a “road warrior”, a “burnt-out, desolate man”, lost in a post-apocalyptic wasteland. Not since Ned Kelly donned his iron bucket and tear-arsed around the bush was there somebody so aesthetically captivating. Max was the essence of cinematic cool.

Mad Max: Fury Road may well be Australia’s ultimate contribution to its own genre-cinema output and a reaffirmation of Aussie imagination and craftsmanship. We can dream real big, too, the new film is suggesting. It may be 30 years since Beyond Thunderdome, the film might have hopped a continent (exteriors were filmed in Namibia) and now fronted by an international cast of movie stars led by a Brit (Tom Hardy) and a South African (Charlize Theron), but the quintessential antipodean humour, sensibility and vision is integral and immovable.

Since the character’s debut in 1979, played by fresh-faced Nida (National Institute of Dramatic Art) graduate Mel Gibson, Mad Max and its sequels have entered the cultural ether as iconic motion pictures. With a quirky sense of humour, memorable villains (Toecutter; Lord Humungus; Aunty Entity), eyebrow-raising S&M fashion and supercharged vehicles, the trilogy said a lot about the potential of mainstream Australian cinema to work under a new aesthetic and sensibility. Miller not only tried to compete with Hollywood, he succeeded. Yet even among acclaimed new-wave dramas and gnarly Ozploitation flicks, Miller’s series stood out as the leather-clad misfit in the crowd. Mad Max and Mad Max 2 are most definitely B-movies, but with A-movie aspirations.

It’s assumed that Australia discovered film-making in the 1970s. That awe-inspiring/terrifying 360-degree landscape shot of pancake-flat outback in Ted Kotcheff’s Wake in Fright (1971) appeared to sum up the nation’s contribution to world cinema. That’s not strictly true. Australia actually produced what is recognised as one of the world’s oldest feature-length works: The Story of the Kelly Gang, in 1906. But the homegrown industry had to fight against the rise in popularity of Hollywood product, a shift in focus and interest towards making newsreels and documentaries, and economic difficulties. What followed were decades of mini-peaks and plunging troughs, seasoned by occasional international co-productions. The 1970s Australian new wave and the subsequent rise in genre film-making was instigated partly by a change in thinking. A government plan was implemented in 1970 to encourage production on a scale not seen before. Tax breaks and other financial incentives created by the John Gorton-led Liberal party administration signalled a new era of intent.

In Mark Hartley’s documentary, Not Quite Hollywood: The Wild, Untold Story of Ozploitation! (2008), Quentin Tarantino described how in the 1980s Australian cinema was a byword for exciting indie movies. But the raging film enthusiast and creator of Reservoir Dogs and Pulp Fiction wasn’t just talking about the lauded works of Gillian Armstrong, Bruce Beresford, Philip Noyce and Peter Weir. He was going gaga for flicks that left some in their homeland aghast and disgusted.

In Australian cinema, even today, genre feels like a dirty word. One reason Hartley made Not Quite Hollywood was his theory that international audiences had embraced the likes of Picnic at Hanging Rock (1975), My Brilliant Career (1979) and Newsfront (1978) because they mistakenly assumed that these were popular entertainment down under. It gave off the erroneous impression that the Australian Film Development Corporation and, later on, the Australian Film Commission, had cultivated a golden land of nothing but art movies. But chop-socky piffle such as Brian Trenchard-Smith’s The Man from Hong Kong were also a byproduct of the tax breaks that had encouraged the wrong types of people. The revisionist doc attempted to set the record straight about a period of film-making once dismissed at home as nothing more than crummy Hollywood knockoffs.

Yet there is one uniting factor across both art and trash. Whether it is proto new-wave drama Wake in Fright, Picnic at Hanging Rock or Mad Max: the bush and outback provided a stunning backdrop for human drama to play out against. Something magically gothic, beautiful, elemental, frightening and unique was captured on screen. DH Lawrence perhaps recognised a similar sensation when, in his semi-autobiographical novel, Kangaroo (1923), Lovat – the pseudonym the author used for the book, commented upon a night-time walk in the outback, and felt overwhelmed by its peculiar vibe the land gave off. “It must be the spirit of the place.”

Mad Max was released to a mixture of acclaim and disgust. A famous article by Philip Adams, titled “The Dangerous Pornography of Death” aired the opinion that Miller’s debut would appeal to “rapists, sadists, child-murderers and incipient Mansons”. Made for $450,000 AUD, Mad Max was a massive hit at home and abroad and launched leading man Mel Gibson on the unexpected path to stardom. After the release of Mad Max 2, in December 1981 – which really is a landmark picture, not only of Australian cinema, but the action genre as a whole – Miller realised he had somehow tapped unconsciously into writer Joseph Campbell’s concept of the hero’s journey. Max and his story went from a parochial revenge tragedy to the universal monomyth.

By the time of Max Beyond Thunderdome, released in the summer of 1985, everything was bigger. The inclusion of children in the storyline demanded a more mainstream appeal and a softer tone. Pop star Tina Turner was cast in a supporting role as the villain, Aunty Entity. A hit single was had with the saccharine We Don’t Need Another Hero. Once more Max, having saved the day as reluctantly as ever, is left all alone, with nothing but the clothes on his back. The films progressed from Ozploitation fodder to the portentous story of a broken man’s spiritual voyage back to humanity via death-defying heroic acts. – (c) Guardian News & Media Ltd, 2015

Mad Max is showing in cinemas May 15.

Rebellion no longer futile (in the movies, at least)

The good, the mad and the ugly

Why your reputation needs an online detox