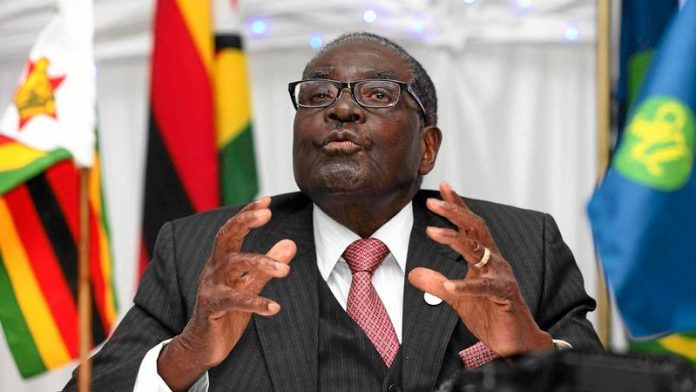 New documents have come to light that implicate Zimbabwe President Robert Mugabe in mass killings of Ndebele people in western Zimbabwe in January 1983.

Thousands of recently declassified documents that appear to expose the perpetrators are now becoming available in a raft of foreign archival collections. The documents are wide-ranging and include, among others, diplomatic correspondence, intelligence assessments and raw intelligence garnered by spies recruited from within the Zimbabwean government. These papers — augmented by the testimony of Zimbabwean witnesses finding courage in old age — appear to substantiate what survivors and scholars have always suspected but never been able to validate: Mugabe, then prime minister, was the prime architect of killings that were well-planned and systematically executed.

The documents appear to show that the massacres were closely associated with an effort by Mugabe’s Zanu-PF party to eliminate opposition groups in the aftermath of Zimbabwe’s independence. Zapu, a party led by nationalist rival Joshua Nkomo, represented the main obstacle to that objective. Given that Zapu enjoyed overwhelming support among Ndebele, the Ndebele as a whole came to be seen as an impediment. In the words of Mugabe, the people of Matabeleland needed to be “re-educated”.

The little that Mugabe has said since the 1980s on this taboo subject has been a mixture of obfuscation and denial. The closest he has come to admitting any form of official responsibility was at the death of Nkomo (1999), when he remarked that the early 1980s was a “moment of madness” — an ambivalent statement that perhaps reflected a fear of Ngozi (avenging spirits) more than anything else and one he has not repeated. More recently, he blamed the killings on armed bandits who were allegedly co-ordinated by Zapu (the original smokescreen) along with occasional indiscipline among soldiers of the army’s North Korean-trained Fifth Brigade.

In the documents, his alleged co-conspirators tell a different story. In doing so, they controvert theories that Mugabe was poorly informed about the activities of errant subordinates. By March 1983, when news of the atrocities had leaked, prompting Western ambassadors and others to ask awkward questions, government ministers who were overseeing the operation quickly pointed to Mugabe, documents allege. Sydney Sekeramayi, the minister in Mugabe’s office with responsibility for defence, was one. In a conversation with Cephas Msipa, one of the few remaining Zapu ministers of what had been a government of national unity, Sekeramayi, said that “not only was Mugabe fully aware of what was going on — what the Fifth Brigade was doing was under Mugabe’s explicit orders”. Msipa later relayed this discussion to the Australian High Commission, which in turn reported it to headquarters in Canberra.

‘Crisis of conscience‘
Msipa appears to be a credible witness in view of his amicable relationship with Mugabe. He had, for instance, shared a room with Mugabe for two years during their earlier career as teachers. Msipa had also welcomed Mugabe into his home when the latter returned from Ghana in 1960 and joined the struggle against white rule. Between 1980 and 1982, when tensions were rising between Zapu and Zanu, Msipa had served as a regular go-between and had spoken to Mugabe often. He continued to do so during the killings. Within Zapu, Msipa, a Shona-speaker, had consistently advocated amalgamation with Zanu, a line that had attracted the ire of Ndebele-speaking colleagues. He was, therefore, considerably more sympathetic to Zanu and its leader than most in Zapu. And yet, after speaking to Sekeramayi and others in Zanu, he was convinced (as he told the Australians) that “the prime minister was right behind what had been happening in Matabeleland”. He added that he had never before had such a “crisis of my conscience” about remaining in government.

Sekeramayi was more circumspect in direct discussions with Western representatives, but nevertheless made clear that the massacres were no accident. The “army had had to act ‘hard’”, he told the British defence attaché, “but … the situation was now under control”. Later, Sekeramayi admitted to the British high commissioner that “there had been atrocities”.

The documents also record that Msipa talked to other members of Zanu who revealed that the killings were not simply the whim of a small coterie, but the result of a formal and broad-based decision by the leadership of Zanu-PF. Eddison Zvobgo, a member of Zanu’s 20-member policy-making body, spoke of a “decision of the central committee that there had to be a ‘massacre’ of Ndebeles”. That statement squared precisely with Fifth Brigade’s ethnocentric modus operandi. Mugabe’s heir apparent, the current first vice-president, Emmerson Mnangagwa, was a member of the central committee. But so, too, were others who have subsequently developed a reputation for moderation, not least because of their latter-day rivalry with Mnangagwa. Former vice-president Joice Mujuru heads that list.

The army commanders who directed the killings, many of whom still retain key positions in a security sector that underwrites the regime, are also shown in the documents to have been eager accomplices. Zvobgo commented that the first commander of Fifth Brigade, Perence Shiri, had said the “politicians should leave it to us” with regard to “settling things in Matabeleland”. Shiri is now the head of Zimbabwe’s air force.

Testimony from witnesses provides evidence that Shiri worked closely with many former members of Mugabe’s guerilla army, Zanla, notwithstanding a myth that Fifth Brigade operated separately from the rest of the army. Those who assisted Shiri allegedly included the now chief of Zimbabwe’s defence forces, Constantine Chiwenga, who was this month awarded a doctorate in ethics by the University of KwaZulu–Natal. During the killings, Shiri frequently consulted with Chiwenga, who was then using the nom de guerre Dominic Chinenge and was head of First Brigade based in Bulawayo. Chiwenga’s unit also provided a range of practical assistance, including logistical support for Fifth Brigade and a base from which Shiri’s men operated when they made punitive raids on Bulawayo’s townships.

The first six weeks of Fifth Brigade’s attacks were massive in their intensity, but the documentary record shows that an order was given to curtail this phase after news of the massacres began to leak to the outside world. However, the killing did not end, but was instead scaled back and conducted in a more covert manner. Estimates of the death toll are frequently put at 20 000, a figure first mooted by Nkomo when the campaign was still under way. But on-the-ground surveys have been piecemeal and vast areas of Matabeleland remain under-researched. Fear and the death of many witnesses provide further challenges. A forensically-accurate number will never be possible, yet it seems possible that the standard estimate is too conservative. Oral testimony from Zimbabweans who were in key government positions during the 1980s disinters a host of killings that were previously unknown. Cumulatively, this testimony suggests that the breadth of the violence and the extent of official involvement could have been significantly underestimated.

Polite questions
Observers have always wondered how much of this was known to Western governments — and what they did about it. It is clear from the documents that they knew a great deal, even if some of the detail remained obscure. It is also clear that the polite questions asked by diplomats were — along with courageous representations by churchmen and their allies in Zimbabwe — pivotal to the government’s decision to reduce the violence. Up to that point, there was no indication that the brutal force of the massacres would be curtailed. Nevertheless, Western governments did little once the massacres were brought down to a lower, but still savage, intensity. Perhaps as a sign that Western censure had its limits, the campaign in Matabeleland North continued during the remainder of 1983; Fifth Brigade was redeployed further south in 1984.

It is a fact that the Western response to violence toward black countrymen in the 1980s was a pale shadow of the reaction to his attack on white farmers in 2000. Many Ndebele remain bitter about this inconsistency. While historians debate the dimensions of Zanu’s violence, for Western policy-makers and the domestic constituencies that are meant to hold them to account there’s a need to reflect again on the price of inconsistency in the developing world. Aside from the human cost, Western advocacy of democracy and international justice will continue to be viewed with skepticism while such glaring contradictions remain.

At the same time, an inordinate focus on the international dimensions of the Matabeleland massacres is to miss the point. Mugabe has instinctively sought to racialise and internationalise internal controversies of which he is the principal author or to invoke the spectre of neocolonialism in the hope of support from fellow African leaders.

Zimbabwe’s Second Vice-President Phelekezela Mphoko recently made the claim that the Matabeleland massacres were a “conspiracy of the West” and that Mugabe had nothing to do with them. Yet the new documentary material appears to underline once more that post-independence Zimbabwe’s greatest crimes and deepest wounds lie squarely at the feet of Mugabe and Zanu-PF. The documents appear to show that the killings were an internal affair, neither provoked nor sustained by outsiders, and that the atrocities were driven from the top by Zanu-PF in pursuit of specific political objectives. Viewed across a period of several years and hundreds of files, the documents appear to provide evidence that — far from being a “moment of madness” in which supporters of rival parties went at each other — the massacres were but one component of a sustained and strategic effort to remove all political opposition within five years of independence, as Zanu leaders were determined to secure a “victory” against nonexistent opposition in elections scheduled for 1985, after which there would be a “mandate” from the people to impose a one-party state. — Daily Maverick